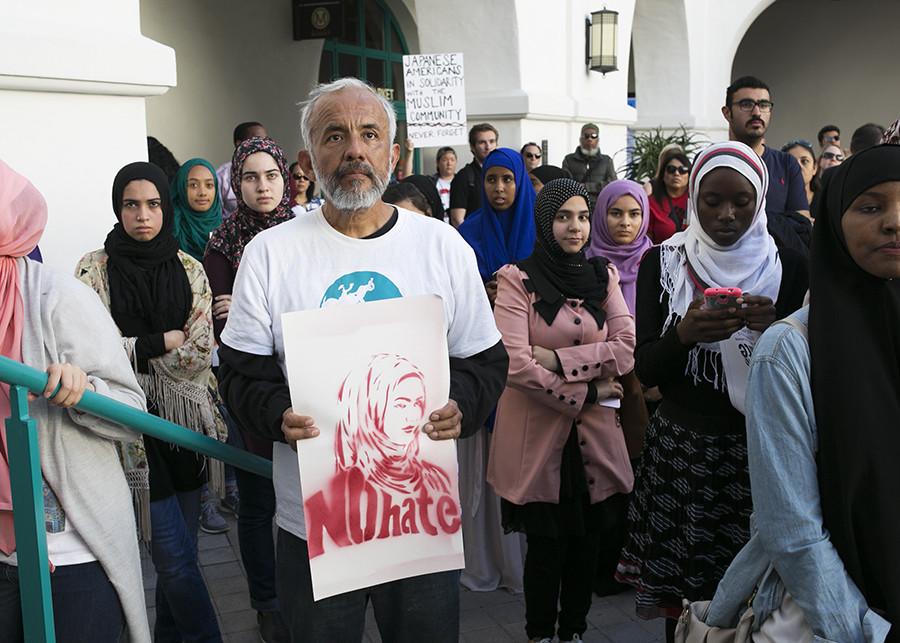 Demonstrators gathered at Hepner Hall Monday afternoon demanding action against Islamophobia on campus. Approximately 600 students marched from Hepner Hall to the Conrad Prebys Aztec Student Union, where they met with Hanif Mohebi, director of the San Diego Council on American-Islamic Relations, and others who spoke on the issue.

The rally was coordinated in reaction to a hate crime that occurred on Nov. 19 in a campus parking lot. According to San Diego State Police, a male in his 20s pulled a woman by her headscarf while making hateful comments and threats based on her ethnicity.

“I want to tell you when I met with our sister that was affected, it broke my heart, my heart was bleeding because I have sisters,” Mohebi said. “Not only blood sisters, all the sisters that are here and those that are not. Why do they have to go through such hate?”

Mohebi read a statement on the victim’s behalf explaining the incident.

According to her statement, the attacker approached her from behind and choked her with her hijab. He told her to “get out of this country,” that she was a terrorist and “you people bombed Paris.”

In her statement she said no one came to her aide during the incident, but expressed gratitude for those who showed support for her at the rally.

In his speech, Mohebi demanded the SDSU administration get involved. He urged the school to provide students with educational forums discussing matters of Islam.

“It’s unacceptable for them to take the students’ money and not educate them properly,” Mohebi said. “Silence is betrayal. If this university or any university stands silent, they are betraying the trust that you and I have put in them. Brothers and sisters, we must unite.”

Lena Mohamed, vice president of the Muslim Student Association, said she experiences this type of hate every day.

“Unfortunately, no one stood up for her, I think that’s the most frustrating, sad part about it,” Mohamed said. “We want to create a campus climate where we feel safe, where we have each other’s backs, where we’re looking out for one another. We’re here to demonstrate that we will not accept Islamophobia on our campus. I hope that people can wake up and see that we’re all one people and I hope that message sends today.”

Ending the rally, the Muslim Student Association shared a list of demands for students, administrators and local leaders. Among demands for cultural tolerance and acceptance on campus, they asked that students, faculty and administration go through a mandatory bystander training and offer increased coursework on Islam.

“A lot of people think that this is just one incident that happened and that Islamophobia does not exist in San Diego or Imperial County,” Mohebi said. “That is not true.”

The San Diego Office of the Council on American-Islamic Relations has received more than 170 reported incidents of discrimination and more than 45 instances of hate mail since January of this year, Mohebi said.

“It’s not the university’s fault that any of this happened,” Buzeriba said. “We just hope that they read our demands and that they take them into consideration and hopefully implement them.”

President Hirshman, who was not in attendance at the rally, was scheduled to speak at the Aztecs Rock Hunger closing ceremony set for 12 p.m. Monday. The event was pushed back in respect for the student demonstrators, said Dominic Bilotti, Associated Students vice president of financial affairs.

SDSU Dean of Students Randy Timm was at the rally and spoke to the students in attendance.

“We are here not only to stand with a member of our community who was assaulted for being herself, but also to support a community that was targeted as a result of this egregious attack,” Timm said.