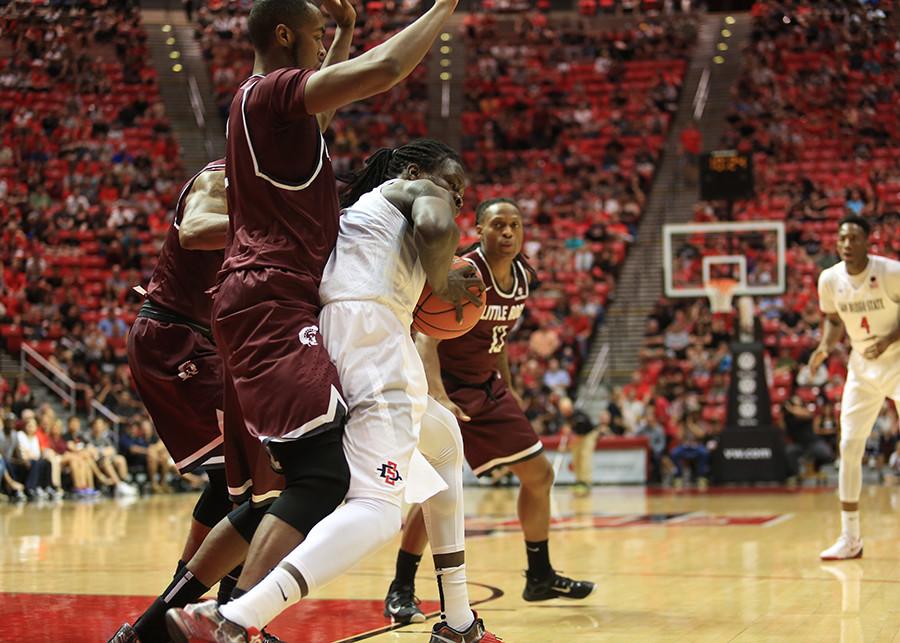 When head coach Steve Fisher ran out his new-look starting lineup against East Carolina University on Monday night, many thought, “I sure hope he knows what he’s doing.”

After the San Diego State opened the game on a 16-0 run, they might have felt foolish.

Everything felt so different. A three-quarters-full Viejas Arena at tip-off, a new starting line up and forcing ECU into three consecutive turnovers on the opening three possessions.

Two freshmen, a sophomore, a junior and a senior.

But the senior who started wasn’t one of the two who normally start the game at center. Senior forward Winston Shepard started the game with his shooting shirt on, and senior center Skylar Spencer, SDSU’s all-time block leader.

“I felt that I needed to do something,” Fisher said after Monday’s game. “I almost started five new guys.”

After the ugly 49-43 loss suffered at the hands of Little Rock on Saturday afternoon there were plenty reasons to believe that senior leadership on this team was on a permanent vacation and in desperate need of a return.

Shepard, Spencer and Chol all combined for no blocks, six turnovers and zero points in 63 minutes.

The vacancy of senior scoring on the stat sheet was a first this season, but this sort of performance by those who should carry the team could’ve been seen from a mile away.

To put it into perspective, coming into Monday’s victory Shepard had only scored 23 points in his three games this season. Nineteen of those points came against University of Utah with 17 coming in the second half of that game. After that game, he said he had played three awful halves of basketball before going off against the Utes.

Also missing from the starting lineup was sophomore forward Malik Pope. Pope has spent this season snake-bitten by poor shots and not converting 3-pointers at a rate that fans are expecting.

Someone had to atone for what happened.

“It’s a performance-based system in terms of what I did,” Fisher said.

There you have it.

The team still needs a leader. It needs a player that, when the team is playing poorly, can put the entire team on his back and elevate everyone else’s game.

It’s not apparent who that is right now. It was supposed to be Shepard.

Shepard first entered the game against ECU with 13:40 left in the first half.

He hit two free throws, and 40 seconds later drove by two defenders to throw down a two-handed slam dunk while being fouled. After finishing the dunk, Shepard stood still facing the crowd with his hands in the air as if he was letting everyone know that he was back.

Shepard finished the game with 16 points, 10 of which game from the free-throw line.

But maybe Shepard’s success was a product of the starting lineup. Hemsley had 16 points and a season-high six assists. Kell had 15 points and Allen had 11, both shot 50 percent from behind the 3-point line.

“We really haven’t been playing to our potential, and we know that,” Hemsley said. “The game plan was just get back to having fun as a team, and just be aggressive.”

On Monday, everything worked.

The problem: no one will take the game over when the team doesn’t play to its potential, isn’t having fun and is over aggressive.

Even though the Aztecs feel better heading into their Thanksgiving day matchup against UC Berkeley, there still isn’t a clear-cut leader on the court.

Maybe not starting was a necessary wake-up call that will force someone to take that leadership role.