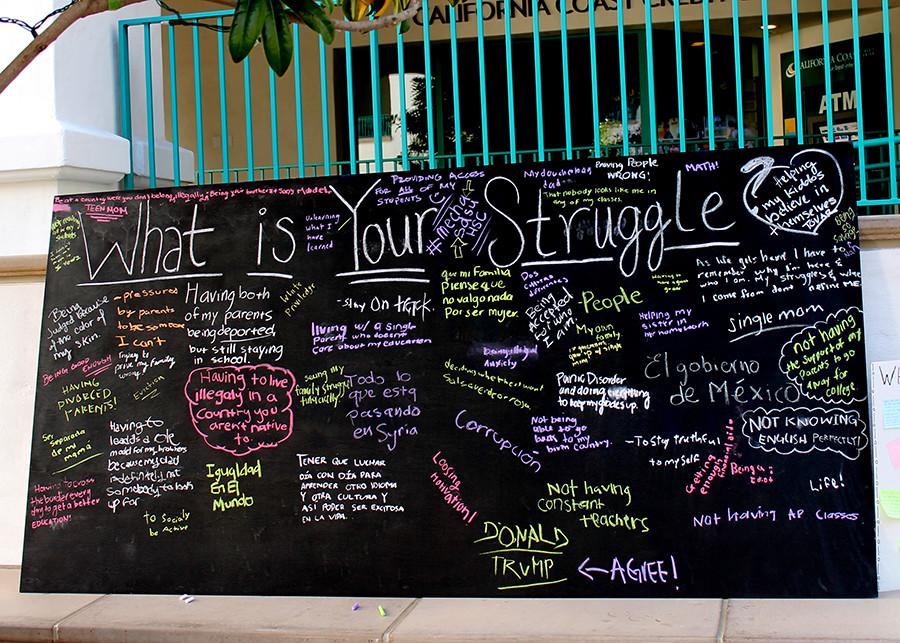 As one of the oldest organizations at San Diego State, Movimiento Estudianil Chican@ de Aztlan (Chicano Student Movement of Aztlan) aims to unify and gain self-determination for marginalized groups through activism and higher education.

M.E.Ch.A is first and foremost a familia (family). The organization is a safe and open space for Chicano students on campus and it empowers underrepresented groups by promoting higher education through political consciousness, cultural awareness and community involvement.

In the 1960s, there was a surge of social and political action within the Chicano community rejecting colonization and racism. Dismantling these oppressive power structures was the impetus for founding M.E.Ch.A on college campuses, a place where Chicanos could come together with the fundamental goal of seeking liberation through knowledge.

Five decades later, the members of M.E.Ch.A SDSU continue to do the work of their predecessors.

This year’s theme was “Our Bronze Struggle: Revolutionizing Education with Our Stories.”

For this year’s conference, high school students and parents around San Diego County were invited to participate in the event that featured speakers, workshops and more.

With more than 700 people in attendance, the walls of the student union theater buzzed with elation from adults and adolescents alike.

“The high school conference we put on every year is really important to us because it accomplishes one of our missions, which is to promote higher education to students or youth who don’t really have the privilege to be motivated to go to college or they come from very underrepresented areas,” liberal arts and sciences graduate student Christian Benavides said. “The conference is a chance for them to meet college students who were in their positions and to tell them, ‘See us? You can be in our position, as well.’”

Some students may recognize the members of M.E.Ch.A from their Krispy Kreme fundraisers during fall semester. Yet, most don’t know the raised funds go toward a scholarship given out during the high school conference.

The scholarship is awarded to one undocumented high school student, and this year’s recipient was Diana Olea Millan. Millan’s narrative is one that many Chicanos have and continue to endure — a struggle of borders as a Mexican immigrant and an American student.

M.E.Ch.A is an educational revolution for a culture that’s otherwise defined as uneducated and unmotivated by mainstream society. The organization creates a more inclusive campus climate for Chicano students and beyond.

“We have our core values that we fight for and they’re ingrained in every single one of our members’ hearts,” M.E.Ch.A Co-chair Itzelt Santos said. “If you’re looking for a familia, if you’re looking to not just be involved in SDSU but the greater San Diego community and if you’re passionate about helping underrepresented people to get empowered and you’re interested in empowering yourself, M.E.Ch.A is the place for you.”