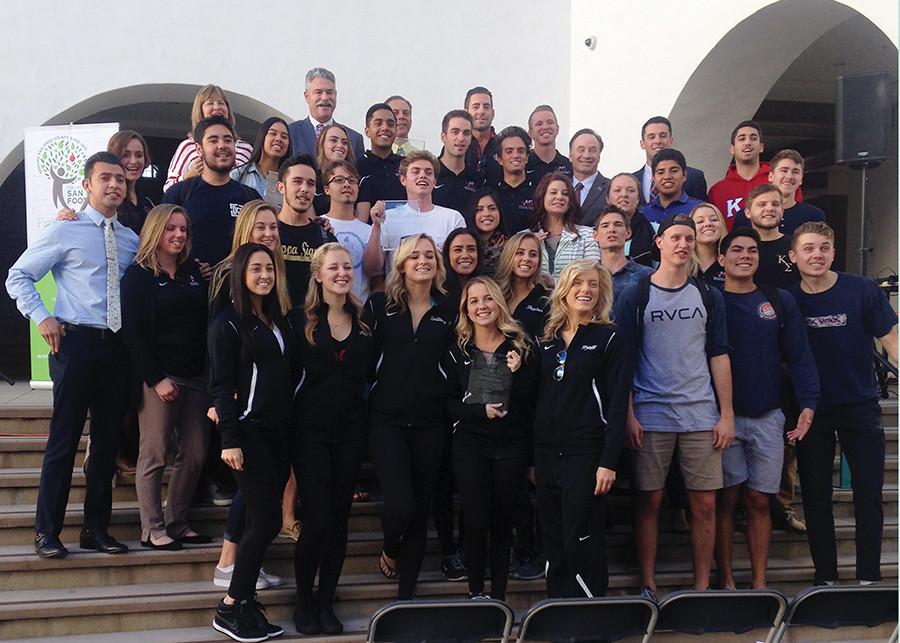 The new record was announced at the Aztecs Rock Hunger closing event on Dec. 2, where President Elliot Hirshman spoke.

“Today is a day to be proud of what our students have accomplished and to recognize that through all things, when this community works together, we can accomplish extraordinary things,” he said.

The food drive, which took place from Oct. 22 through Nov. 15, was in partnership with the Jacobs and Cushman San Diego Food Bank. President and CEO James Floros also spoke at the event.

“It really takes a community to support a community, and the Aztecs Rock Hunger food drive has done tremendous things throughout the years,” he said. “We’re feeding about 400,000 people every single month … so this will go a long way toward helping those people in need.”

In previous years, SDSU used to compete against universities in the area to raise the most amount of food in a competition called Colleges Rock Hunger. Floros said SDSU’s high contributions were the reason the competition between local universities ended.

“It wasn’t fair, because you guys do that well,” he said. “And obviously you’re much bigger, but I’m a University of San Diego alum, and they don’t even do the food drive, so I’m a little embarrassed, so I say hats off to San Diego State, you guys killed it.”

For the first time this year, Alumni Engagement also partnered with the food drive and helped raise 23,000 pounds of food, Bilotti said.

Aztec Shops donated the most to the food drive with 260,000 pounds of food.

“We just knew it was such a huge campaign,” Maharaj said. “Being one of the A.S. boards, we had to be able to support it.”

For the first time, 10 percent of monetary donations will go to SDSU’s Economic Response Team. This year, $6,800 will go to help students on campus with food insecurities.

Bilotti told A.S. members at a College Life Council meeting later that day that A.S. Government Affairs Manager Jennifer Esquivel-Parker had pranked him, saying the Aztecs Rock Hunger food drive had collected fewer pounds. Bilotti went into the closing ceremony thinking A.S. had raised only 318,000 pounds instead of more than 400,000.

“This year was something else,” Bilotti said. “You guys made sure we didn’t just break the goal, we shattered it.”