Sinkhole opens off I-8 near College Avenue 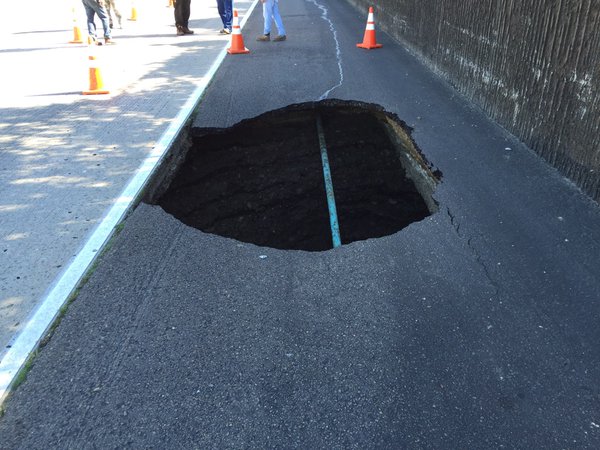 A large sinkhole opened on the side of Interstate 8 near the College Avenue exit around 10 a.m. on Jan. 21.

California Highway Patrol officers and the San Diego Fire-Rescue Department were called to the scene, where they closed three freeway lanes. Traffic was backed up past Interstate 15.

One of the lanes was re-opened at 1 p.m.

CalTrans officials report that the closure will continue until the road is fixed. A tweet from the CalTrans account reads, “Expect Long term closure.”

At 4:30 p.m. CalTrans reported via Twitter that the two-lane closure on eastbound I-8 west of College Avenue was extended to include the eastbound I-8 on-ramp from Waring Road.

CHP officials issued a SigAlert and advised motorists to take alternate routes if possible. No injuries or accidents have been reported.

For commuters wishing to avoid the severe traffic, the Metropolitan Transit System is offering free overnight parking at Qualcomm Stadium. The stadium is served by the Green Line, and connects to other trolley lines in La Mesa, El Cajon and downtown San Diego.