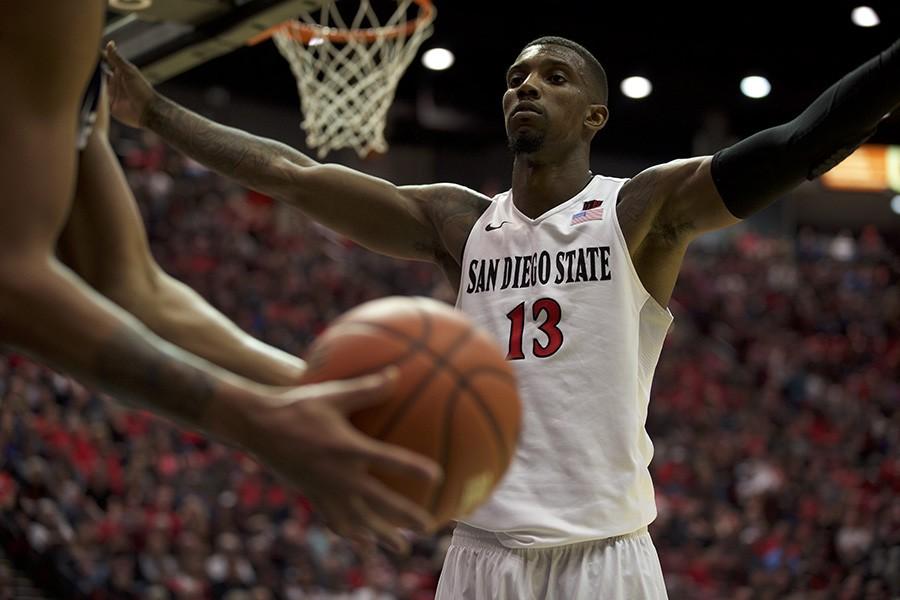 Somewhere on the way to a 7-6 nonconference start, fans of San Diego State men’s basketball became concerned — scratch that — became annoyed with the team’s performance.

Annoyed at the fact that this team disrupted the expectation of maintaining the status quo that head coach Steve Fisher and his previous teams — including two key players in senior forward Winston Shepard and senior center Skylar Spencer — have established.

Seven games into conference play the Aztecs have redeemed themselves and are meeting expectations, and it’s the way they are doing it that needs to be the focus.

There are two types of expectations heaped onto the backs of sports teams: internal and external.

The internal expectations are the obvious ones set by coaches based on what they see when recruiting players, while coaching in practice and based on performance in practice and games throughout the season.

External expectations are not.

Expectations from the outside are generated by talking heads on TV and radio, bloggers and these “world class” recruiting services. A majority of these entities involved in creating these expectations have never spent a day in practice, in film sessions or in a coaches’ or players’ meeting.

This isn’t to say coach Fisher expected to lose six nonconference games and was OK losing them. In a series of uncomfortable press conferences, he made it clear he felt quite the opposite.

“I don’t think you can say there was a whole lot of benefit in our losing six games,” he said.

Whether the team benefited from a slow start to the season or not is still up for debate, but the losses did provide a low-water mark, which now makes it easier to say that the team has, without a doubt, improved and is meeting the expectations, realistic or not, of those outside the program.

The resurgence of SDSU men’s basketball manifested itself in a seven-game winning streak to start conference play. That was the Aztecs’ second-best start to MW conference play with only the 2013-14 team starting better by winning its first 10 conference games.

By the time SDSU  returns from its two-game road trip to the University of Nevada and UNLV, it could be one win away from tying its all-time record for best MW conference start.  More impressive than getting close to eclipsing this record is the way the Aztecs are winning games.

The defense, despite early-season struggles defending the 3-pointer, has been stellar. It ranks fourth in the country in adjusted defense, according to kenpom.com, a respected statistical ranking similar to RPI. But great defense is expected. It’s what this program is built on.

What  hasn’t always come easily is the offense. Entering the 2015-16 season, there was plenty of fanfare surrounding the offensive production of Shepard, the potential for offensive growth by Spencer and an all-out conclusion that sophomore forward Malik Pope was going to carry the team’s offense.

But really the bulk of offensive production has come from elsewhere.

Those scorers: freshman guard Jeremy Hemsley, redshirt-freshman forward Zylan Cheatham and sophomore guard Trey Kell. And in six of the team’s first 20 games Shepard has been the leading scorer or tied for most points in that game.

Offensive production from a putting-the-ball-in-the-basket sense has not been tied to seniors, which is not necessarily a bad thing. If we are, after all, talking about expectations, the seniors are doing more than meeting them.

Spencer has the most blocked shots and is second on the team in rebounds, while Shepard, who is more known for his passing than scoring, has one less assist than the team leader (Hemsley) while playing 100 minutes less than Hemsley.

Fisher also said Spencer and Shepard have emerged as leaders on the team.

“I think in particular, Winston and Skylar, have become better role models,” Fisher said. “Leaders by example, unafraid to say some things.”

Regardless of past play, let’s face it. These guys are everything that was expected, and in two weeks could be even more.