Stories from the SDSU street preachers 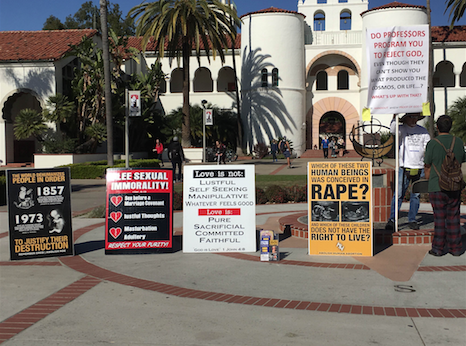 Many students see them while heading to class or stopping to grab something to eat. They stand with their Bible in hand, preaching the word of God as people rush by. They are the street preachers of San Diego State University.

Street preachers are a common sight on SDSU’s campus and have been for some time now, according to SDSU Police Sergeant of Special Services,  Steven Harshaw.

For the 23 years Harshaw has served SDSU, he has always seen street preachers spreading their religious beliefs on campus.

Aside from being seen as a source of entertainment, some students, such as senior and former Christian, Michael Villalobos, are bothered by the sheer number of street preachers across campus.

Among these preachers is Keith.

He can often times be seen and heard feverently debating with students in front of East Commons.

“I usually don’t tell anyone what I do because there’s so much stigma to it,” he said.

As a former member of the finance industry, Keith now dedicates himself full time to visiting college campuses across the country to spread the gospel.

“My main goal is to announce the gospel, but then secondly, I also want to challenge the students intellectually on the things that they believe,” Keith said. “Thirdly, they might hear in their classes certain things about Christianity, so I want to provide a defense.”

Although they have the right, street preachers exercising their freedom of speech are not always well received by the student body. Name-calling, obscene gestures and even physical abuse are some of the aggressions street preachers face on campus. Keith recalled an occasion where he was punched by a student at a Colorado campus and more recently, when an SDSU student threw a drink at him.

“It’s meeting aggression with aggression because the message is so extreme and exclusive,” said Angela Feres, professor of religious studies and Asian studies at SDSU.

Some of the student body find the messages street preachers share to be, as Feres said, “extreme and exclusive,” but also aggressive and harsh.

This idea may come from messages like “whores burn like smores,” a phrase said by a street preacher who refers to himself as Brother Mikhail.

“They’re just blowing hot air,” Piccus said. “They’re trying to get people to be convinced by this stuff, but just yelling at people isn’t gonna convince anybody.”

Keith denied using language used by Brother Mikhail, but he acknowledged that at times he may raise his voice more than he should. He justified it by stating that it’s the students that determine the tone of the debate and the way he preaches is consistent with the way Christians have been preaching for centuries.

“If you read the scriptures, Jesus was kind of an aggressive preacher,” Keith said. “Where the apostles would preach there were sometimes even riots.”

A short distance from Keith, Mark Jasa, a Christian Pastor of Mount Olive Lutheran Church,  sits quietly in a fold out chair by Love Library with a small white box in front of him reading, “Religion is for the weak.”

His main concern is to spread the message that all sins are forgiven because of the death of Jesus Christ, no matter what the person has done.

Jasa finds happiness in seeing the expressions of people when he tells them this message. Such as an experience he had with a Muslim girl that approached him and told him she feared Allah would judge her.

“I told her don’t worry about judgement, Jesus was judged in your place,” said Jasa. “It was amazing just seeing this joy and shock all at once.”

Judgment is another issue related to street preachers that concerns students.

“God says not judge, but then here they are judging people,” said Piccus.

The argument of street preachers not being able to judge others is attributed to the double-standard placed on members of his occupation Keith said.

“Everyone says, ‘oh you can’t judge you can’t judge,’ but then they say racism is wrong,” he said. “Well aren’t you judging the racist? If I was out here being a pro-choice group and a pro-lifer chucks something at me people would be like ‘Oh how dare you do such a thing,” but when I’m out there suddenly the standards have changed.”

It would be easy to assume these preachers have always been religious, but this is not the case. The street preachers mentioned in this story were all non-believers at some point, but through various events that occurred to them throughout their lives, they became the preachers they are today.

Douglas William, a street preacher that’s been visiting SDSU for about 12 years, said he found his calling through divine intervention

William stands by Hepner Hall with large signs about abortion, sex out of marriage and creation. He grew up in a functional atheist family, meaning they would go to church and do all the ceremonies, but they didn’t really believe or enjoy it.

He grew up as an atheist, but experienced several odd occurrences that led him to consider the possibility of the existence of a God, but he never took it seriously…until one night.

Every now and then, William would get intense headaches. They were so bad that they had caused damage to one of his eyes.  One night, he woke up with a particularly bad one.

“Just as a figure of speech I said, ‘God, why do I have to have these headaches,’ and to my horrendous surprise, something started happening.”

About 10 feet in front of him were purple letters spelling out the name Jesus.

“And I thought well great, now I’m hallucinating too.”

The letters started vibrating, shrinking as they moved closer to him. They entered through his right ear, revolved inside his skull, exited out the same ear and instantly the pain and letters vanished, as well as the problem with his eye.

“I have a background as being a skeptical person and I had a hard time believing what had just happened to me, but I thought well I know two things for sure,” William said. “I’m not in pain anymore and I can see.”

After this experience, William began to take Jesus more seriously and he converted to Christianity.

“I know it sounds kinda funny, but I felt like God wanted me to do this,” he said.

William said he heard the voice of God, an actual voice, ask him to go out to college campuses to preach. His goal on campus is to encourage students to think more in depth about the beginning of the world and to be open-minded to the possibility of God.

Despite their intentions of doing good, Feres and Whitaker said they both believe the sermons some of these street preachers give may divert from the original message that their religious leader, Jesus Christ, taught.

“The problem for these individuals could be what is called moralism,” Whitaker said. “You not only have a moral standard, but you hold it so rigidly that you become condemning to others if they don’t hold it in the same way you hold it.”

Even though they know how people view them, the street preachers are determined to keep sharing their message.

“Are people going to look at us and think we’re religious nuts, yeah of course, but if you come and see if anything good can come from these ‘religious nuts,’ I think that they would see that we’re very normal and in many ways very different,” said Keith. “We’re human beings, we’re made in the image of God, and we love justice and mercy.”