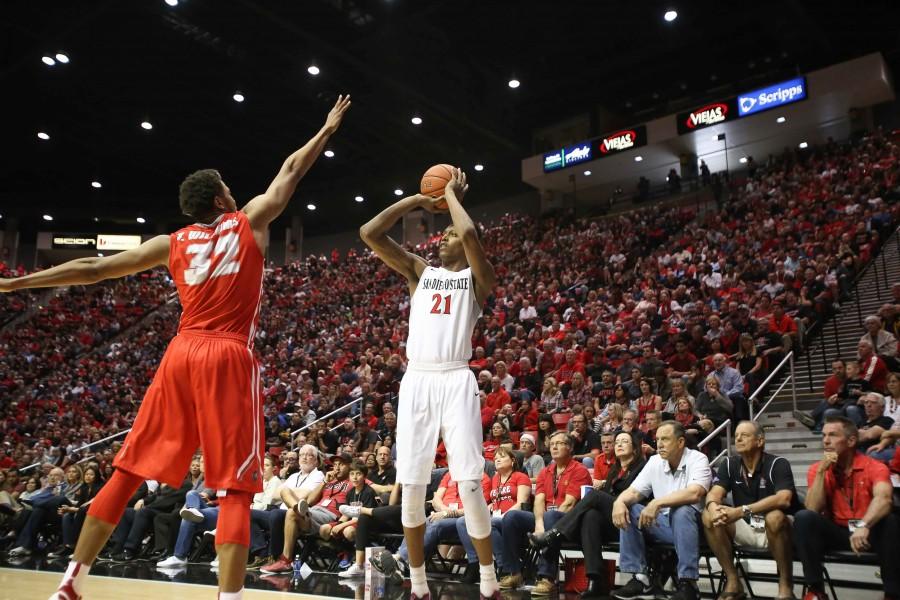 Sophomore guard Trey Kell’s step-back jumper with a little more than a second left in the game Wednesday night did not fall, and after an offensive interference was called, SDSU was left scratching its head with a 58-57 loss in Fresno.

The Bulldogs broke all kinds of streaks with the win.

For starters, the Aztecs’ best start in conference play and 11-game win streak came to a screeching halt.

The team also fell just one game short of setting the Mountain West record for most wins to start out conference play at 12.

Lastly, the school-record 13-game conference winning streak was gone with the wind.

After pulling off an 11-game win streak, and after dropping games to less-than-mid-majors in nonconference play, it would be easy to assume that a loss was on the horizon.

But the fashion the Aztecs lost in on Wednesday will leave a bad taste in their mouth for a long time to come.

Fresno State was missing its No. 2 and 3 leading scorers in junior forwards Torren Allen and Karachi Edo due to injuries.

The Aztecs pulled of a 14-0 run in the first half, but their 12 turnovers kept the Bulldogs well within reach and SDSU led 30-29 at the halfway point.

Coming into the game the Aztecs were 13-0 when leading at half.

Much like the beginning of the first half, the Aztecs started the second half with their hair on fire and a 12-0 run helped accumulate an 11-point lead.

But a calf injury to Kell that cost him a few minutes and the sudden lack of scoring from freshman point guard Jeremy Hemsley helped the Bulldogs creep back once again and the game was tied at 54 with 2:54 left in the game.

Hemsley led the Aztecs with 18 points, but didn’t attempt a shot after the 11:10 mark in the second half.

SDSU was able to pull off magic Saturday when sophomore forward Malik Pope’s 3-pointer in the final seconds forced overtime and led to an Aztec win, but that magic was absent in Fresno.

There are many facets of the game that point to why the Aztecs couldn’t capitalize on the low-staffed Bulldog team.

The Aztecs shot 62 percent from the free-throw line in 21 attempts and a missed free-throw by redshirt-freshman forward Zylan Cheatham with 57 seconds left proved to be crucial.

Another glaring stat is the 18 turnovers committed by the Aztecs to Fresno State’s 11 (one less than the Aztecs had in the entire first half).

Not to mention, Fresno State senior guard Marvelle Harris had 20 points compared to 12 points the last time the teams played and did it in three less shots.

Senior forward Winston Shepard said that it’s impossible to get lucky 11 times in a row following the team’s win over New Mexico.

Against the Bulldogs, the Aztecs were not very lucky, and their seemingly uncanny ability to win the close game, which has made them good in conference, was not present.

SDSU will look to pad its first-place lead in the MW when it welcomes Air Force Academy at 8 p.m Saturday to Viejas Arena.