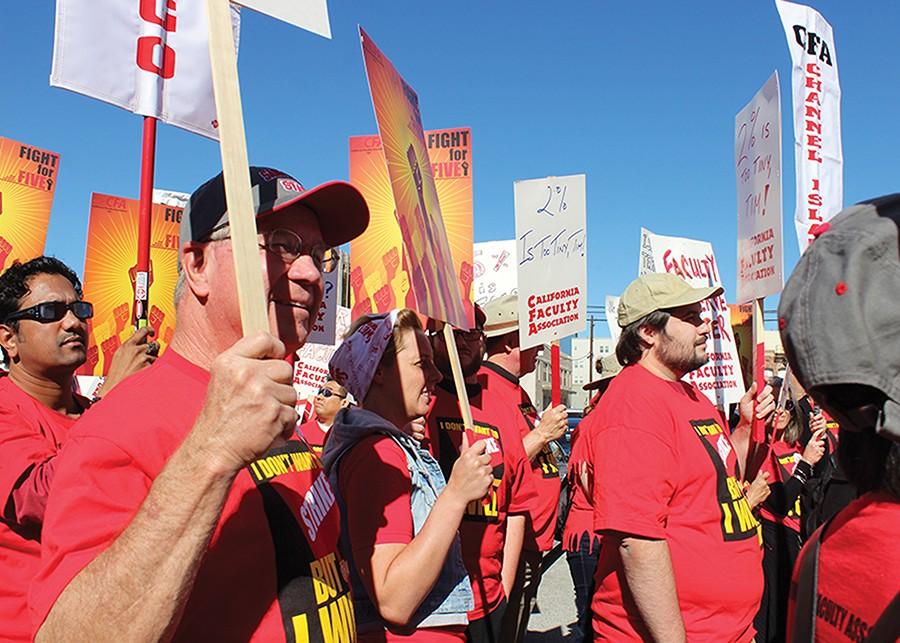 by Will Fritz, Contributor

The strike, which will only occur if the union and CSU officials are unable to come to an agreement on salary increases, is planned for Wednesday, April 13, through Tuesday, April 19.

The union has asked for a 5-percent salary increase, while CSU officials have offered 2 percent.

Dr. Jennifer Eagan, Director of the CFA and philosophy professor at CSU East Bay, said the decision “was made over the course of many months,” and faculty are “extremely angry, and with good reason.”

She said faculty did not receive a pay increase between 2008 and 2012, and in fact took a 10-percent pay cut in the form of furlough days during the 2010-11 academic year.

The furlough days were voted upon by the CFA and taken voluntarily in the face of budget cuts and a weak economy.

Eagan said while faculty received an $800 raise in 2013, and most have received a 1.6-percent raise in 2016, this was not nearly enough to keep pace with pay increases at other universities, or with the rising cost of living.

She went on to say the CSU system has “misplaced spending priorities,” and has “plenty of money to continue to freeze student fees in place and pay faculty.”

She also said the union’s announcement of plans for a strike should not be seen as a sign of doubt that a deal can be reached, as preparations for a strike require significant advance notice.

Eagan declined to state whether any amount below 5 percent would be acceptable, saying “we would be bargaining against ourselves,” and that “the ball is in their (CSU officials’) court” to make an offer better than 2 percent.

Eagan also said it was important for campuses to begin hiring more tenure-track faculty, as 59 percent of faculty are lecturers on temporary contracts with fewer benefits and decreased job security.

CSU Director of Public Affairs Toni Molle said in an email, “If a strike occurs, campuses intend to remain open.  Many classes will be offered, and students should check with their instructors regarding the status of their classes.  The strike should not interfere with students being able to complete their semester and quarter courses and graduate on time.”

She also said updates would be available on campus websites and social media accounts.

In the same email, Molle said students should plan to attend class even if strike activity does occur, and that “we anticipate that many classes will continue to meet as not all faculty will strike.”

However, in the CFA press conference, it was noted that 80 percent of faculty turned out to vote on strike activity, and 94 percent of those approved a strike.

Molle also said in the email, “No individual, including students, can be compelled to take a position by either the administration or the faculty. Classroom time cannot and should not be used by faculty to discuss issues related to the strike. Students cannot be compelled to walk out of class, walk picket lines or support the strike as part of a class assignment or in exchange for a grade.”

Dr. Eagan said chapters of several other unions have sanctioned the faculty strike, meaning that members of those unions will not cross picket lines to serve university campuses.

Two of these sanctions will affect SDSU: Teamsters Joint Council 42 and San Diego — Imperial Counties Labor Council. This means that UPS drivers and some construction workers will potentially avoid serving SDSU during the strike.

The CFA announced their plans for a strike on Monday, Feb 8., after approximately two years of the “Fight for Five” campaign. The CFA and CSU have been in negotiations regarding faculty pay since May 2014.

Their campaign has included various demonstrations on campus during the last two years.

In October 2015, faculty met with President Elliot Hirshman to ask for his support regarding salary and contract issues.

Later that same month, several faculty members held a demonstration outside of the library.

“We feel that (faculty) should be paid a fair wage so that we can provide quality education, and (faculty) don’t have to worry about where their next meal is going to come from,” social work lecturer Kim Archuletta said in an October 2015 interview with The Daily Aztec.