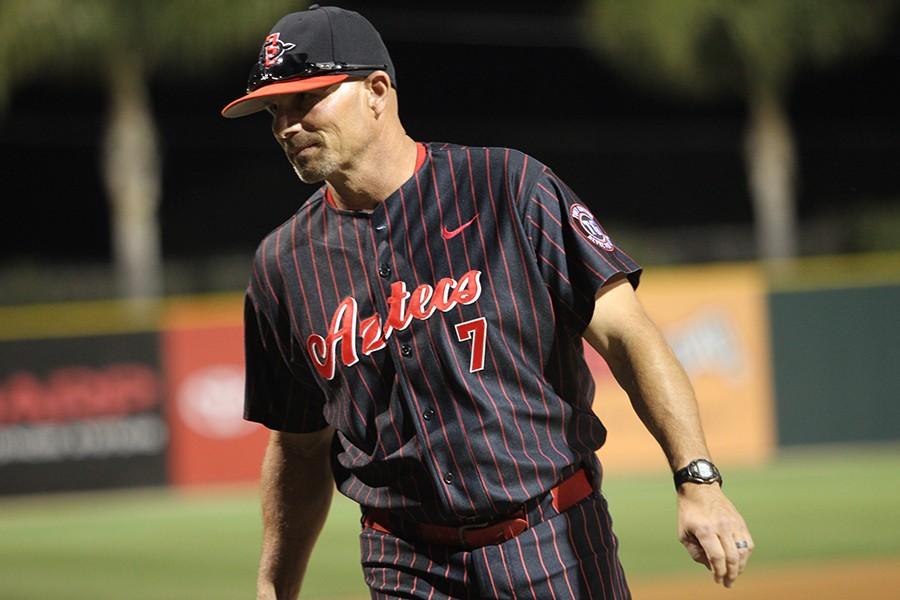 In 2011, San Diego State baseball painted a completely different picture than it had in the previous three years.

With Hall of Famer Tony Gwynn at the helm, the Aztecs finished the season 22-36 and were the second team to be eliminated from the Mountain West tournament.

Part of their struggles stemmed from the challenging schedule Gwynn and company put together.

SDSU faced seven teams ranked in the National College Baseball Writer’s Association’s Top 25 poll, six at home, an abnormal gauntlet for a program that had made one NCAA Regional appearance since 1991.

While a lot of things have shifted since the 2011 season — most noticeably, Mark Martinez taking over for the late Gwynn — the Aztecs are still offering a healthy menu of opponents.

The schedule is, however, slightly less meaty.

“Tony was scheduling the 1927 Yankees,” Martinez said of his longtime friend, comparing the schedule to the New York Yankees’ infamous Murderers’ Row. “That was a little too much. You want to have an opportunity to win some of those games.”

For the 2016 season, the Aztecs are set to play three teams in D1Baseball.com’s preseason top 25 in No. 14 University of Oregon, No. 5 Oregon State and No. 21 Cal State Fullerton. Far less demanding than the onslaught the team has faced in years past.

But it’s all part of a plan.

Well, as much of a plan as college baseball lets you have.

“It’s organized chaos,” Martinez said. “You try and design it where you can put a great product on the field to compete on a national scale.”

He dreams of a schedule littered with top-25 opponents coming to Tony Gwynn Stadium.

But SDSU has yet to be in the position to make that dream a reality. Back in 2011, the Aztecs didn’t have sustained success, even under coach Gwynn.

The lone NCAA Regional SDSU had reached in the 20 years prior was in 2009, when future MLB No. 1 overall pick Stephen Strasburg was shutting down opposing hitters.

Loading up the slate with national powerhouses, coincidentally, ensured the team would not experience the growth necessary to reach the next level.

It’s like when you first start lifting weights, you don’t go straight to the 35- or 40-pound weights.

First, you have to start with the 15 pounds, then 20 pounds and slowly make your way to the heavier sets.

That is the strategy that SDSU has adopted in the past few years — and it’s paying dividends.

The Aztecs have played only two top-25 teams in each of the past two seasons, a far cry from the seven that terrorized the schedule only a few years ago.

That has played a factor in SDSU’s ability to make three consecutive NCAA Regionals, allowing the team to flex its muscles.

But after taking on relatively easy schedules the past few years, the powerlifting Aztecs are ready to move to the next weight rack.

SDSU needs to play the top dogs if it wants to truly compete with the best.

“In order to play on a national stage, you got to play a national-type schedule,” Martinez said.

Likewise, they have to recruit on the national stage — something that necessitates a high-level schedule as well.

“The recruits like to see who you’re playing,” Martinez said. “Being one of the top teams in the MW, we have to design our schedule like this.”

Playing teams like Oregon and Texas Tech University, while on the road, will vastly improve the recruiting outreach and power the Aztecs possess.

Going forward, SDSU already has its 2017 schedule locked up and full of top teams.

The Aztecs will face at least four top-25 teams (according to this seasons’ rankings), all from Southern California, in UCLA, USC, UC Santa Barbara and CSUF.

This is also coinciding with the Tony Gwynn Classic, which will be played for the first time this season, and is hosted by SDSU and cross-town rival University of San Diego.

The event is supposed to bring top teams to San Diego every year.

Redshirt-senior outfield Spencer Thornton sees the value of playing top teams not only for the program, but for his own experience.

“Some of your fondest memories are with the best teams,” Thornton said. “It’s like the cherry on top.”

And with the talent and success that SDSU baseball now has, it can create more of those memories for players and schedule with the same fervor and optimism of former head coach Tony Gwynn.