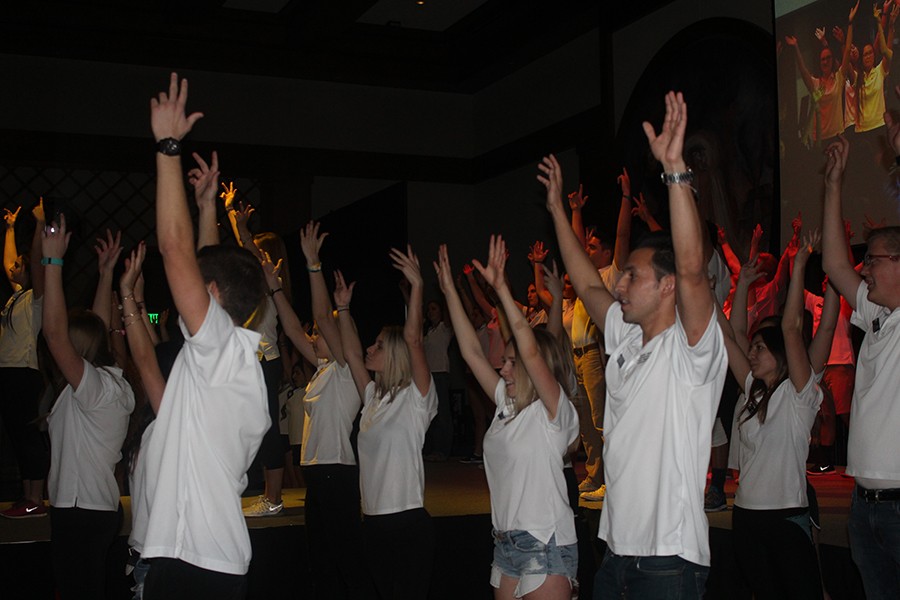 San Diego State students showed their support for children by dancing for 15 hours straight at the Annual Aztec Dance Marathon on Feb. 12-13 and raised $84,000, the most of any west coast college, for Rady Children’s Hospital.

SDSU was aiming to surpass University of Colorado, Boulder, throughout the night as Boulder raised $70,000, during its dance marathon this year.

More than 500 Aztecs danced through the night in Montezuma Hall for kids with a variety of illnesses.

Each hour, a family would share their story and experience at Rady Children’s Hospital.

She has lived with feeding tubes and gone through chemotherapy, but with the help of Rady Children’s Hospital, Mansen now only has to go to the hospital once a year for two weeks.

Mansen also said she is extremely thankful for the support of the Aztecs and their willingness to help others like her.

The families’ stories ranged from conditions like Mansen’s to heart transplants and different types of cancer.

“I think it’s beyond words as you hear stories and think about the impact,” said Christy Samarkos, associate vice president for Student Affairs. “It’s immeasurable. Students gain experience from a humanity standpoint.”

This dance marathon was part of “Dance Marathon,” a nationwide movement that takes place in more than 450 schools to raise money for Children’s Miracle Network Hospitals.

The event was a year-long effort and was organized by students and faculty from Student Life and Leadership. SDSU’s goal for this year was $100,000 after raising over $40,000 last year.

When signing up, the participant set a goal and was given a link to share among their peers who were willing to donate in order for the participant to reach that goal. A large portion of the Aztecs present were from fraternities and sororities.

“I’m here because I like kids, and 15 hours is really daunting, but just to see them smile is amazing,” said freshman Tiana Hodzic, member of Alpha Chi Omega. “It’s even cooler that the patients are here to participate.”

Other students formed their own groups, such as resident advisors, who encouraged their hall members to attend as well.

“I heard a lot of great feedback last year, and I wanted to experience it myself,” said sophomore Mireille Garcia, resident hall advisor at Tenochca.

Besides dancing, a variety of games and activities were provided throughout the night where patients and students had the chance to interact.

The Aztecs were notified with the amount they raised at 8 a.m. after dancing for 15 hours.

“It was for a great cause because we were standing for the children who couldn’t,” Garcia said. “Hearing their stories and strength was really touching.”