SDSU baseball suffers 8-2 loss to No. 14 Oregon in front of packed house for season opener 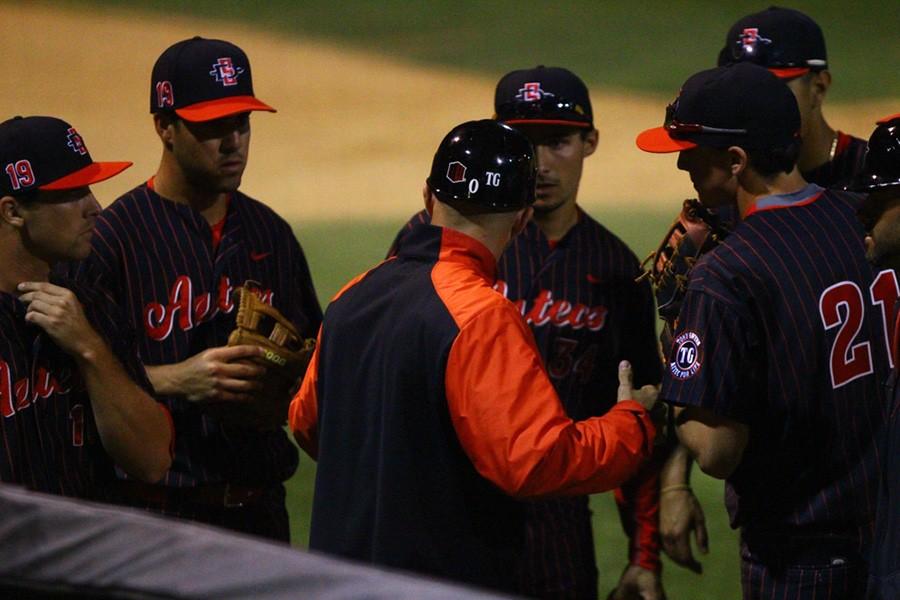 After a long nine months of waiting, San Diego State baseball opened up its 2016 campaign.

One can only assume this is not the result it had in mind.

A packed house of 1,685 fans witnessed an 8-2 loss for the Aztecs to University of Oregon at Tony Gwynn Stadium.

The Aztecs, who are beginning their quest for a fourth consecutive Mountain West championship, struggled to muster up any offense in the first seven innings to combat the Ducks and starting pitcher ,junior Cole Irvin,  and were facing a 2 -0 deficit against No. 14 Oregon.

But SDSU mounted a rally in the bottom of the eighth inning.

Junior catcher CJ Saylor drew a walk, and reached third on a double off the bat of sophomore shortstop Alan Trejo.

Irvin walked junior third baseman Andrew Brown to load the bases with one out, forcing the Ducks to take out Irvin.

Redshirt-senior outfielder Spencer Thornton drove in Saylor on a sacrifice flyout to right field, and sophomore infielder Justin Wylie brought SDSU all the way back with an RBI single, driving in Trejo, and tying the game up at two.

But SDSU could not close, collapsing in the top of the ninth inning.

Oregon, known for its speed on the track and on the football field – think Steve Prefontaine and, more recently, Marcus Mariota – showed the same quickness on the basepaths.

In the top of the third inning, the Ducks scored two runs, using their speed as the main catalyst against lefty junior starter Marcus Reyes.

And in the ninth, that speed came into play again.

The play was a contentious one, and effectively shifted the momentum of the contest back to Oregon.

“It definitely changed the tides of the game,” Reyes said, “but it’s baseball. They capitalized off of it. We got tomorrow to make up for it.”

Head coach Mark Martinez argued the call, but it would not matter, as Oregon quickly opened up an 8-2 lead by the end of the inning.

“We can’t let those things affect us,” Martinez said, referencing the play at the plate. “We didn’t handle the call not going our way and it snowballed into a big inning.”

Sophomore Jacob Erickson suffered the loss, giving up one run in one inning.

He was one of six pitchers used by the Aztecs, four in the ninth inning alone.

For Oregon, Cole Irvin showed well in the first seven innings, striking out nine batters in 7-plus innings of work, earning a no-decision.

The win was given to junior Stephen Nogosek, who struck out one in 0.2 innings, all of which came in the bottom of the eighth.

Travis Moniot, listed as one of the top second basemen in the country by D1baseball.com, had one hit and one RBI in his first game for Oregon.

Sophomore infielder Daniel Patzlaff had a big performance as well, scoring two runs and driving in one as well on two hits.

“We got caught up in the moment of opening night,” coach Martinez said, “but now we gotta start playing baseball and that starts tomorrow.”