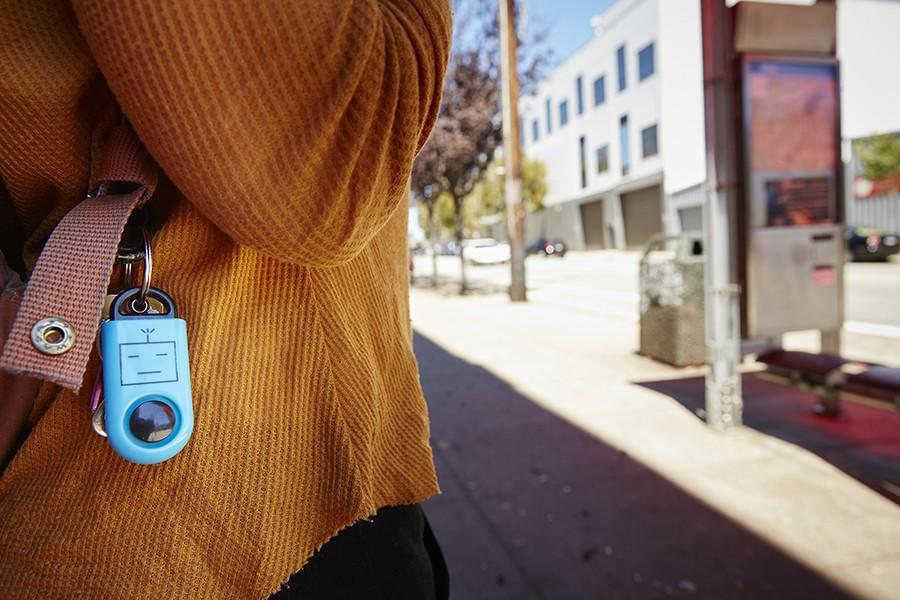 The ROBOCOPP sound grenade is a small device intended for personal safety use. When the user pulls the pin out, it emits a 120-decibel noise, approximately the same noise level as an ambulance.

“Many students don’t realize how important personal safety is,” said Jill Turner, public relations director for ROBOCOPP. “Especially students who have just arrived at college from small, tight-knit communities. They tend to overlook that crimes do happen on campus.”

“There’s a lot of discussion around the likelihood of being attacked by someone you know, as opposed to the guy-hiding-in-the-bushes type of assault. But those attacks still do happen, and I think they’re often overlooked,” he said.

He cited recent events in Berkeley, where three women reported being sexually assaulted by a stranger in the same week.

The ROBOCOPP device is already being recommended to students on more than 100 campuses nationwide. Mansen hopes that other universities, including SDSU, will follow suit.

A representative from the company is meeting with SDSU officials on Feb. 25.

“I think it’s a good idea, but I don’t know how effective it would be,” English senior Monica Dube said. “If someone is chasing me, I would just run. I wouldn’t necessarily reach for the alarm.”

While many students arm themselves with pepper spray, Mansen said he believes that isn’t always the best option.

“The problem is that when you look at it from the numbers side, it isn’t effective,” he said. “Most people want to deter an attack, not engage in it. They don’t want to stay in that situation.”

Turner mentioned the blue emergency lights on many campuses, like SDSU’s. She said while they are good to have, they may not always be the most practical solution for stopping an attack in progress.

Another safety option that has recently been made available to SDSU students is the Aztec Shield app. Among other features, students can use “Friend Watch,” which gives a user the option to have a friend monitor their location through the app.

Dube said the Aztec Shield app could be useful, but most students, including herself, just text their friends their whereabouts and when they’re home safe.

But the safest option of all, Mansen and Turner said, is staying in a group.

“You’ll almost never see a story about a group of six students getting mugged,” Mansen said.

The SDSU Police Department also emphasized the importance of staying in groups when possible.

The Spring Safety Message from Police Chief Lamine Secka reads, “Avoid distractions such as talking on your cell phone, walk in groups whenever possible and immediately report suspicious activity to the SDSU Police Department.”