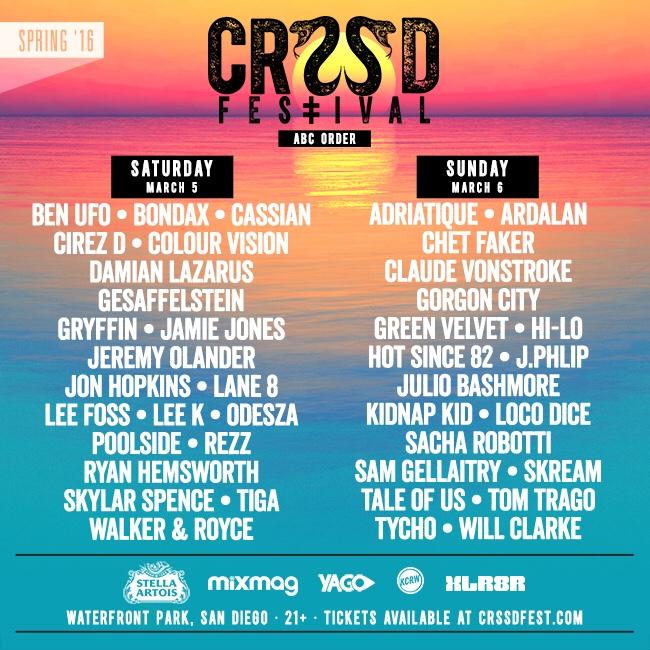 CRSSD Fest will have its third series of its biannual festival on March 5 and 6 at the San Diego Waterfront. Debuted to a warm reception last March, this upcoming festival has marked a full year of good vibes and sunset sets. Featuring three talent-filled stages, San Diegans and guests from all around Southern California will flock to downtown San Diego to enjoy the weekend.

CRSSD Fest has been locking down prime real estate in San Diego. Conveniently placed in between the shores near the Waterfront and picturesque cityscape, the grassy fields and city steps provide the perfect backdrop to dance the night away. Starting each day at noon and going strong till 11 p.m., what better way to enjoy your San Diego sunset than with the curated vibes at CRSSD?

Following two star studded lineups in 2015, Fngrs Crssd have done it again with their March ‘16 lineup.

Chet Faker and Odesza blew up in a huge way last year, taking over the festival circuit. It’ll be interesting to see how their sound and performances have evolved since then and see what they bring into 2016.

Out on the City Steps stage, house and techno savants Loco Dice, Cirez D, and Tale of Us will each spin for an extended two hours. With support from Ben UFO, Hot Since 82 and Jon Hopkins to name a few, City Steps will bounce between the light and dark sides of techno and house. Cirez D, Eric Prydz’s techno alias, looks to melt minds after his Eric Prydz Presents Epic 4.0 Los Angeles takeover on Feb. 19th and 20th.

Last but certainly not least is The Palms stage. This stage is my
favorite as there are so many artists to choose from. Headlined by Claude Vonstroke and Green Velvet, this stage features an eclectic mix of techno, electronica, house and disco.

Gorgon City will be perform its second set of the weekend with a DJ set. Green Velvet and Tiga will also provide some deep, dark techno vibes.

I’m really looking forward to catching Boardwalk Records native Julio Bashmore as well as the soulful Sam Gellaitry to take me through a musical journey.

On top of a full afternoon of music, CRSSD is extending the party late into the night with CRSSD After Dark, a full-lineup of after-parties, starting Friday, March 4th throughout the weekend. With shows all over downtown San Diego, from Spin Nightclub to Fngrs Crssd’s home Bang Bang, to the Andaz Rooftop and The Music Box, CRSSD Fest is an all weekend affair for San Diego.

Check out the full list of CRSSD After Dark shows here.