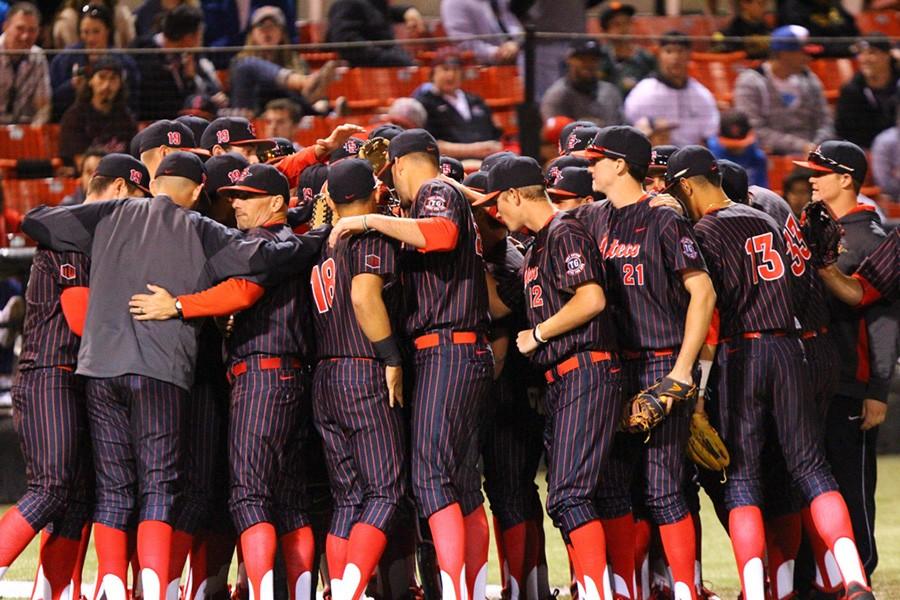 The loss brings SDSU to 1-4 early on, with the lone win coming last Tuesday in a 4-2 win over UC Irvine.

The Aztecs continued their pattern of losing late, as they gave up two runs in the top of the ninth when down by only one run, a mistake that sealed their fate on the night before the start of the first annual Tony Gwynn Classic.

The Aztecs — who were marked as the home team for the neutral-site matchup — were down early, facing a 5-0 deficit in the second inning as the Toreros came out with a fury after their 3-game sweep to nationally ranked Vanderbilt University last weekend.

Junior right-fielder Hunter Mercado-Hood, who went 2-3 with 2 RBIs and one home run, opened up the contest with an RBI single in the top of the first inning for USD.

The Toreros added three runs in the second inning and one more in the fifth, extending the lead to 5-0, before SDSU began a comeback, as they have several times already this season.

Sophomore shortstop Alan Trejo doubled in junior catcher CJ Saylor  and then made home on a single by sophomore second baseman Justin Wylie.

With three more runs in the next two innings, including one driven in by Trejo — who went 2-5 with three RBIs on the night —  the Aztecs closed the deficit to one run.

The Aztecs pushed back again in the ninth inning, down 9-5, getting runners on first and second with no outs. But they could only manage one run in the final frame.

The Toreros did all of their damage with two outs, scoring all nine runs and recording ten hits in such situations.

This follows the script thus far in the season, as the Aztecs played a close contest, but made one too many mistakes at the wrong time.  In this case it was getting the third out of the inning.

The Aztecs used six pitchers, as junior starter Mike Diamond could muster up only 1 2/3  innings. He gave up five runs, one earned, in his first loss of the season.

SDSU will get a chance to rebound from the tough loss Friday night, when they face Bryant University in the first round of the Tony Gwynn Classic at Tony Gwynn Stadium.