Mythical streak vanishes in a heartbeat for SDSU men’s basketball 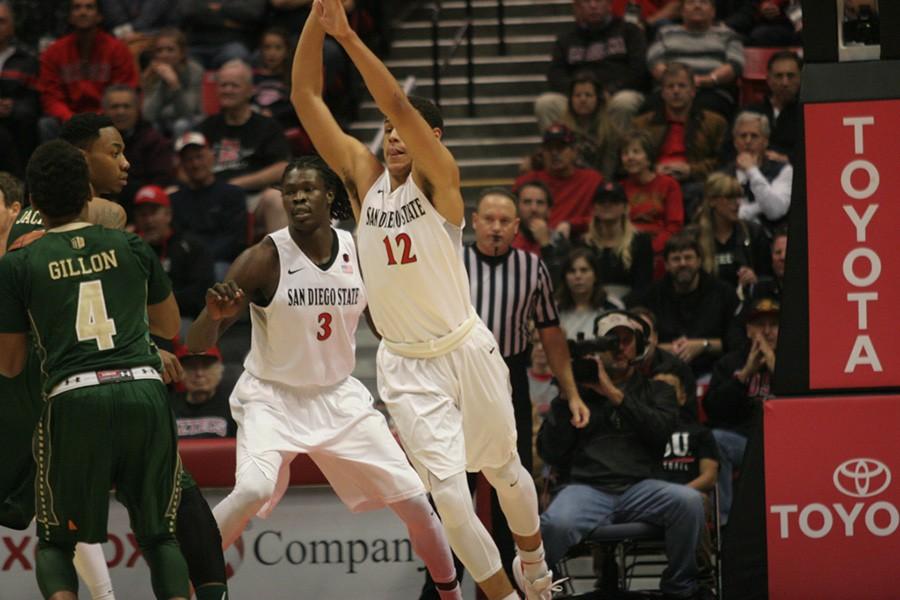 Chalk up the San Diego State men’s basketball team’s 164-game winning streak when winning with five minutes or less to play in that same family.

A streak that may never again be broken, or even threatened, for quite a while.

A streak that has spanned over six years and added on by players like Kawhi Leonard, Billy White, Xavier Thames and many others.

A streak that added an extra incentive for fans to stick around till game’s end, not that they should need one.

Just this year, the delicacy of the streak was put to the test when sophomore forward Malik Pope’s buzzer-beater against University of New Mexico forced overtime on Feb. 6 and breathed new life into the team, and the streak.

However, like head coach Steve Fisher mentioned after Saturday’s 66-63 loss to Boise State that ended the illustrious accomplishment, “It looks good for TV.”

Obviously, the streak didn’t have the same hype to the players and coaches as it did to the fans and media, but it had almost become something of folklore, something that seemed like it would never end.

But, as he usually does, Fisher took a glass half-full approach to the streak ending.

“Our mission will be to start one in Albuquerque (New Mexico) that goes 150-plus again. And I hope I’m here to see it.”

Hemsley still coming off the bench

For the third straight game, freshman guard Jeremy Hemsley came off the bench, as Pope started in his place for the second game in a row.

He logged 25 minutes in Saturday’s loss while scoring 11 points.

The team’s leading scorer, who had started the previous 25 games straight before missing the Feb. 13 contest against Air Force Academy, has had to adjust to coming off the bench.

Although it’s not a huge adjustment in his opinion.

“Either way, I’m going to come in and try to play as hard as I can and affect the game in any way I possibly can,” he said.

Hemsley was upset with himself after the game, saying that he “played like a freshman,” and that he let his teammates down.

Like most of his teammates, he struggled from the free-throw line going 3-for-6, while also committing six turnovers.

Aztecs lose again with opponents’ key players out with injury

SDSU has been lucky on several occasions that the key player, or players, on a team aren’t able to play because of injury.

Maybe that is its Achilles heel, though.

When the Aztecs lost to Fresno State on Feb. 10 the Bulldogs were without two starters, junior forwards Torren Allen and Karachi Edo.

Coincidence, or change of mindset?

“I’d say it’s coincidence,” Kell said. “The coaches tell us not to worry about who’s playing and just execute the gameplan.”

In Webb’s absence, sophomore forward Chandler Hutchison was a sparkplug for the Broncos, leading the team with 16 points, two away from his career high.