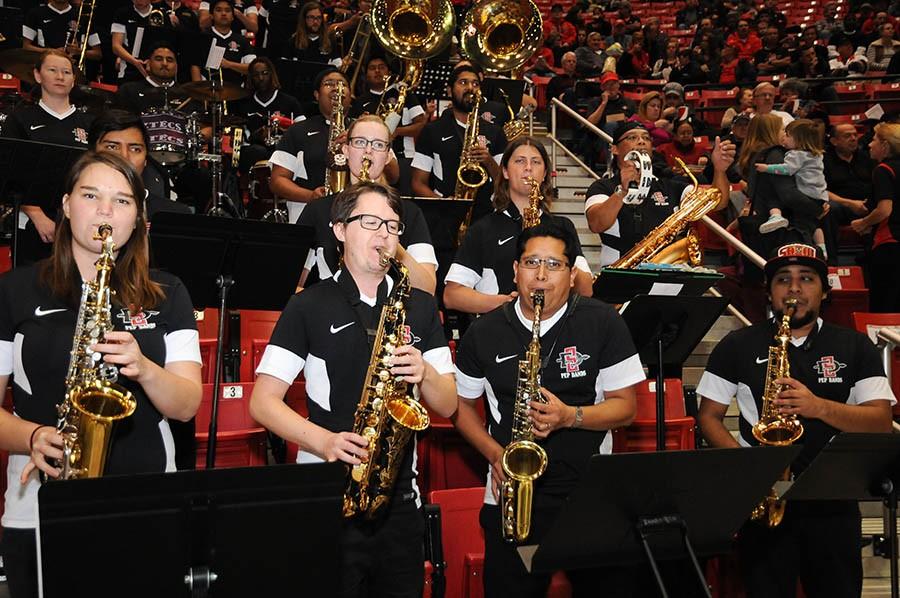 At San Diego State, music can be heard everywhere — especially in Viejas Arena during basketball games. At the women’s basketball game, it’s the varsity band, and at the men’s games it’s the pep band who pumps up the student section.

The pep band, along with the marching band, varsity band and winter guard, are coordinated and directed by Bryan Ransom, the director of athletic bands.

Ransom has been with the university since 1988 after receiving both his bachelor’s degree in music and his professional teaching credential from SDSU.

“The pep band has always been kind of an elite band,” Ransom said. “It’s always been a hard group to get into because it’s limited instrumentation, limited size and a sought-after position. Everyone wants to be a part of it because of its reputation and the atmosphere that comes with it.”

A combination of music and non-music majors are involved in the pep band, with 80 to 90 students auditioning every fall semester. Although pep band used to only hold 30 students, that number increased to 45 when games started selling out.

The band differs from other college bands because students are required to learn more than 300 tunes instead of the average 25 to 40. Ransom uses the varsity band as a “proving ground” to assess the students’ commitment and musicality throughout the years.

The pep band only rehearses six to eight times during the fall semester before performances begin. It plays a combination of pop tunes, such as Bruno Mars and Paramore, to classic rock and jazz.

“Our rehearsals are basically running through tunes and deciding what’s going to sound good that year,” Ransom said. “The music is mostly geared toward having the audience at the games recognize the music.”

The pep band is audition-based, and returning musicians are required to re-audition each year. Ransom posts the music online before an audition so students have time to learn it beforehand. On audition days, students come in to play for about five minutes while their musical and sight-reading skills are assessed.

“I always look for energetic players and, obviously, good musicians,” Ransom said. “Most of the students I know ahead of time, but I usually get a sense of people’s attitudes, commitment and energy levels early on. It’s always a plus if the students love basketball because they’re more engaged.”

The band is available for both fall and spring semesters, with a winter session commitment requirement.

“I wish I would have been a part of pep band sooner,” Castro said. “The group is really tight-knit. When I look back at my college experience, my fondest memories will be from pep band.”