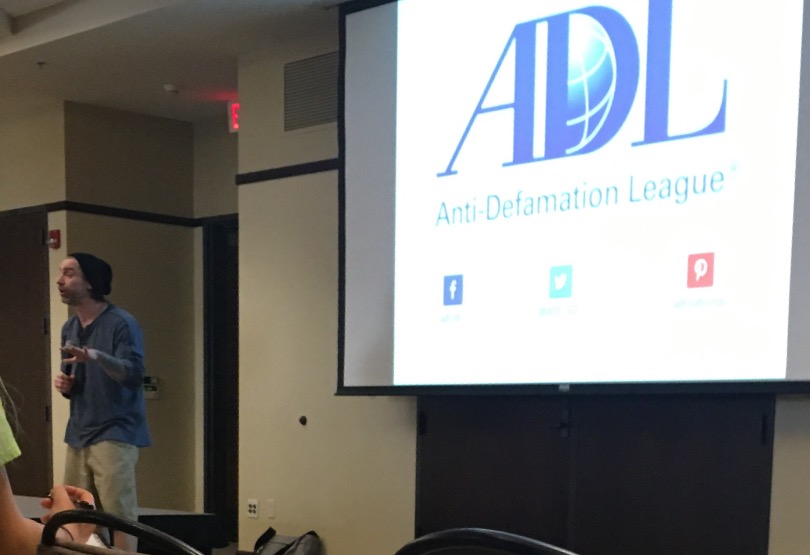 The events hosted by the One San Diego State Community and Anti-Defamation League for “Week of Caring” ended Friday, March 4 in the Parma Payne Goodall Alumni Center with Frank Meeink, a recovering skinhead.

He emphasized the importance and power of empathy through his path to recovery after being part of the Neo-Nazi movement and spending time in prison.

Meeink was raised in South Philadelphia in an unstable household with his mother and stepfather who physically abused him. His biological father lived in Southwest Philadelphia as a drug dealer.

Meeink said he dreaded going home from school, and his goal every day was to get hit by a car.

“I didn’t see the light at the end of the tunnel,” he said.

When he was 13, he moved in with his biological father and went to a local middle school populated with mostly African-Americans and controlled by the Junior Black Mafia gang.

The next summer, Meeink went up to Lancaster, Pennsylvania to spend time with his older cousin. His cousin’s walls consisted of newspapers about skinheads, Nazis and Hitler.

Meeink recalled a moment when he went out with his cousin and skinhead friends to a concert and started beating people up. He said he remembered the look of fear on one of the guy’s faces.

The skinheads recruited Meeink and shaved his head. They then started talking to him about the Jews and how they stole money from the federal reserve system and gave it back to Israel.

“The Jews were the center of everything for us,” Meeink said. “They were the cause of it all.”

Meeink went back to his neighborhood after the summer and started recruiting kids himself, and he spent much of his time in juvenile detention centers.

Meeink then moved to Springfield, Illinois, and at the age of 17, he had a cable access show where he would perform skits about Nazis with the intention to recruit more kids.

He said newspapers and the media would write about them, which is what they wanted.

On Christmas Eve, Meeink kidnapped a man who he thought was stealing his recruits. He tortured him and videotaped it.

The police found him, tried him as an adult and put him in prison.

He was put in a cell block without any human contact because he was a minor. He began to read the Bible on his own and started fasting. A guard told him if he ate the next day, he would put him in general population.

“God gave me what I needed, not what I wanted,” Meeink said.

He was in jail for three years and spent a lot of his time there playing football with African-Americans.

Meeink couldn’t find a job after his release due to his tattoos. A friend told him about a job carrying antique furniture at a mall in New Jersey, but the man who owned the shop was Jewish.

Meeink said he still took the job because he needed the money. He then reflected on a moment when he broke a piece of furniture and called himself stupid. He said  his boss then told him he wasn’t stupid, but instead, he was genius.

“(My boss) judged me for what I did today, not yesterday,” he said.

Meeink said the biggest lesson he wanted his listeners to get out of his story was empathy.

“I can’t hate you if I have empathy for you. We’re going to be connected,” he said. “That’s real. That’s when we really start to change as human beings. Pain, empathy and having that for each other.”

Meeink now advocates against groups such as the one he was in, coaches hockey and has his own book called “Autobiography of a Recovering Skinhead.”

“I think (empathy) is something (students) to take away from this and their time in college,” said Cassie Grunder, assistant regional director of ADL. “It’s an amazing life lesson, and it’s really important how we treat each other in the world.”