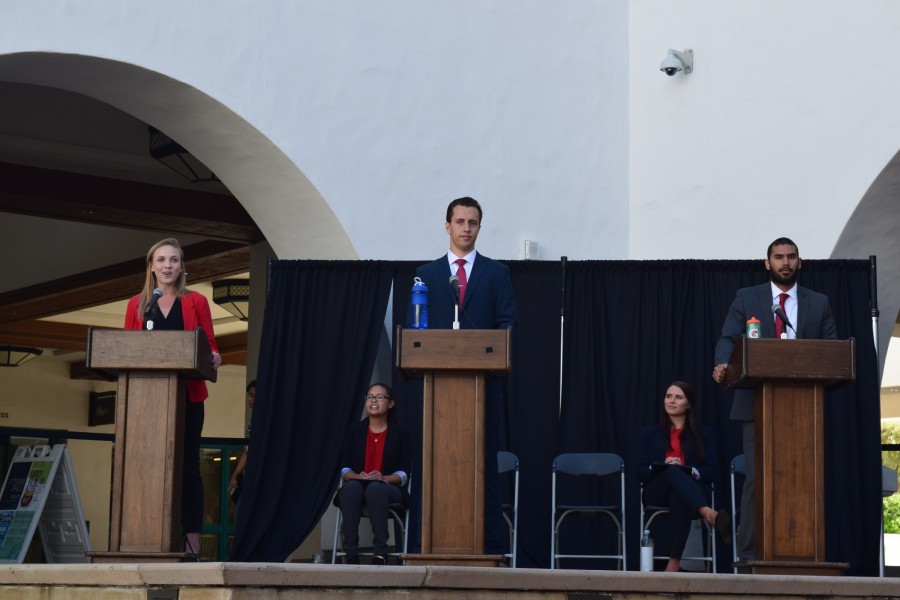 Three candidates for Associated Students President and two candidates for Executive Vice President squared off in the courtyard of the Conrad Prebys Aztec Student Union on Wednesday, March 9 at San Diego State.

Candidates gave their opinions on representing the student voice, the role of the president and vice president and the possible faculty strike set to occur in April.

Presidential candidates Harrison Baum, Jamie Miller and Ahmad Sanatyar, and Executive Vice President candidates Patty Masengale and Bridget Hansen gave opening statements then took turns responding to a wide variety of questions in front of a crowd of around 200 students.

A common theme in the answers of the presidential candidates was the need to properly represent the student voice.

“Students feel their voice is being silenced, not only by the university but by student leaders also,” Miller said.

Miller said she wants to start town hall meetings where students can voice their concerns.

“The role (of the A.S. President) is not only to oversee the executive team,” Baum said. “It extends far beyond the title and it carries with it the responsibility and privilege to be able to fight for students.”

Sanatyar said he chose to run for A.S. President because it is the position with the biggest impact on campus.

“I feel like I am indebted to a large group of minorities that needs somebody to pioneer the way, have somebody represent them for once and have some type of role model to look up to and believe that they can do this one day as well,” Sanatyar said.

“I chose to run for (Executive Vice President) because everything I have done has aligned with these roles,” Masengale said.

Hansen said she thinks the role of vice president reaches the most diverse section of the student body and she wants to get those students involved on campus.

“There’s so much more to the college experience than just sitting in a classroom,” she said. “From getting involved in Associated Students to other clubs and State organizations across campus, it is so important that students are able to find their drive and passion in other interests as well.”

All of the candidates agreed with the California Faculty Association’s decision to strike in April.

“It is both fair and affordable for CSU to give faculty the salary raise,” Hansen said.

“If faculty feel no incentive to teach, we can’t expect a quality education,” he said.

Masengale said faculty haven’t had a salary increase since the 2008 recession.

“Professors don’t make enough money for them to live off of,” she said.

Each candidate had one minute to respond to each question and two rebuttals to use, although none of the candidates elected to use one during the debate.

The candidates also responded with what they thought was the biggest issue facing SDSU in the coming years.

Sanatyar said it was communication as a whole for the university and A.S.

“A large demographic have no idea what A.S. is or who their executive officers are,” he said.

Hansen said the biggest issue is accessibility to an affordable education. She said she wants to improve the Economic Crisis Response Team to help alleviate food insecurity on campus and educate students so they know how to access the services they are paying for.

Masengale said she sees campus safety as a concern, especially after the hate crime on a muslim student Nov. 19, 2015. She said she plans to create a 24/7 escort service so students can feel safe walking home at night.