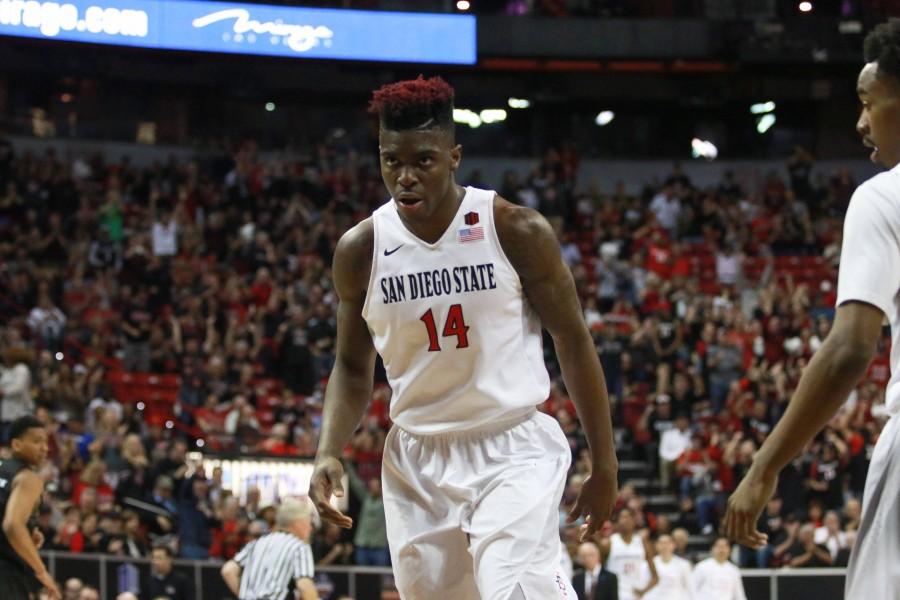 LAS VEGAS — Defense was on full display in the Thomas and Mack Center Friday night as the San Diego State men’s basketball team beat University of Nevada 67-55 in the Mountain West Tournament semifinals.

The win advances the Aztecs to the championship game, their third in as many years and seventh in the last eight.

On paper this game had the makings of a knock-down, drag-out brawl between two of the top MW defenses, and in a rare occurrence in Las Vegas, the perception matched reality.

Neither team was able to sustain an offensive rhythm for more than a few possessions. But SDSU was able to lean on another huge second half by sophomore guard Trey Kell to carry the day.

After blowing a 10-point lead out of the halftime, it was Kell that would score 13 of SDSU’s next 16 points and give his team a commanding eight-point lead, which the Aztecs wouldn’t give up. He would be subbed out to a roaring crowd appreciative of his heroics.

This is with him being sick and receiving an IV at halftime, head coach Steve Fisher said.

“I just felt kind of sluggish, not feeling so well,” Kell said. “Then a little bit before halftime came I went back to the locker room, met with the doctor and then came back and I felt a little bit better.”

But that is not to say he was a lone ranger, as senior forward Winston Shepard had another solid all-around game with 13 points and seven rebounds. Junior guard Dakari Allen, who started in place of redshirt-freshman forward Zylan Cheatham, ended his night with 11 points, five rebounds and four steals.

Allen’s play even garnered him special praise from his coach.

“It wasn’t a one-man show, but our best guy was Dakari,” Fisher said. “He played angles. He read shoulders. And he had four steals and none of the were just wild gambles in terms of what he did.”

Cheatham was able to make up for yesterday’s 1-of-9 shooting and was economic with his shots, but made each count, including a crowd-pleasing put-back dunk in the first half.

However, this would not be a true SDSU game without some tension. After dominating the first half and taking a 34-24 lead into halftime, the Aztecs allowed the Wolf Pack to claw their way back into the game.

Behind freshman forward Cameron Oliver and senior guard Tyron Criswell, Nevada was able to put some jitters in this predominant Aztec crowd in the final frame.

Combined the duo put up 22 of the Wolf Pack’s 31 second-half points and 35 of their teams 55 total points.

But the SDSU defense rose to the occasion and forced Nevada to turn the ball over 12 times in the final 20 minutes for 14 points.

“We created turnovers because we compacted when we were guarding off the ball and said we’re going to make you shoot tough 2s, that was our goal,” Fisher said.

The Aztecs were also able to force the Wolf Pack to commit 14 second-half personal fouls that they turned into 21 free-throw attempts and made 14 of them.

Although Oliver finished with a double-double, 21 points on 7-of-16 shooting and 10 rebounds, the Aztecs were able to limit his supporting cast from the field, as they combined to go 11 for 37.

That highlighted the glaring absence of a fully healthy senior guard Marqueze Coleman, who suffered a deep bone bruise in his ankle against Utah State on Feb. 24. While Coleman still logged 10 minutes, it was clear he was physically limited by the injury.

The last time these two teams met he scored 21 points and grabbed seven boards, but he primarily had to be a cheerleader for his team in the loss.

“Your senior leader, you’ve got to give him an opportunity, but it was too much to overcome, his ankle,” Nevada head coach Eric Musselman said.

Pope maintained his stroke throughout the first half, scoring eight points, only to be sidelined with two fouls with only nine minutes of action. He would play 11 minutes in the second half but was unable to duplicate his first half rhythm.

SDSU will play either Colorado State or Fresno State in the MW championship game at 3 p.m. Saturday afternoon.