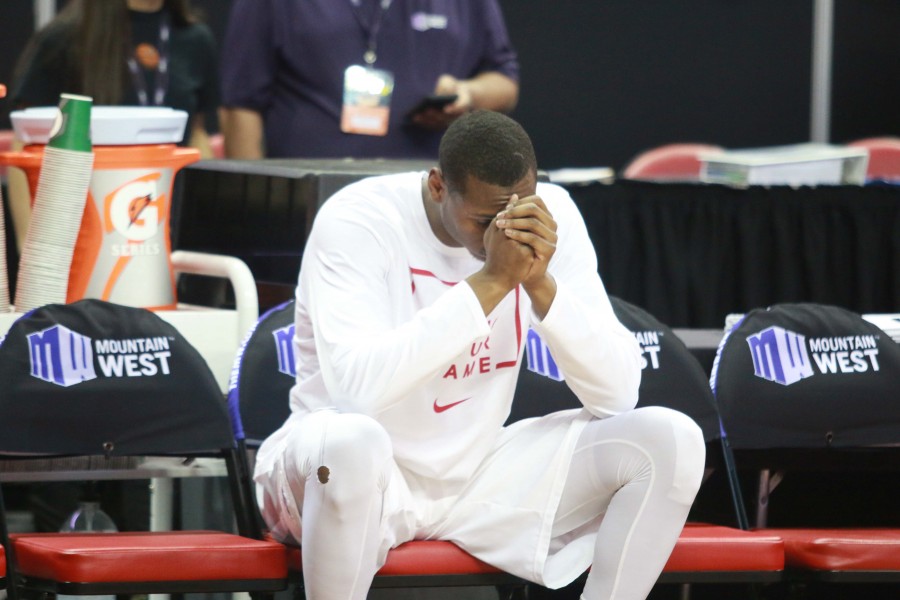 LAS VEGAS — The San Diego State men’s basketball team came to Las Vegas for the Mountain West Tournament needing three wins to assure itself a spot in the other tournament in March.

It came up just one short.

The Aztecs were defeated by Fresno State, 68-63, Saturday afternoon in the MW Tournament final at the Thomas and Mack Center in Las Vegas.

The team will await the NCAA tournament selection committee’s decision on whether the MW regular-season champions will receive one of the 36 at-large bids and make its seventh consecutive tournament appearance.

Coincidentally, the Aztecs entered the game against Fresno State ranked 36th in RPI.

“I thought we had an excellent season. I think we’re definitely one of the best teams in the country,” Shepard said. “I don’t think this is a team that many people would want to play. So this is the hard part.”

Coaches around the MW will agree in unison that the Aztecs should be given the at-large bid.

“This league is hard every night. You’ve got to go to some remote places. Coming to Fresno is not a place they’re excited to come to,” Fresno State head coach Rodney Terry said. “You’ve got to play in some difficult places, difficult venues. We have great talent in this league, great coaches in this league. One of the best leagues in the country.”

However, the committee has been notoriously tough on the MW in past seasons — Colorado State last year, for example — and to say it’s a 50-50 chance is not an overstatement.

“We’re not a one-bid league as a rule. We’ve had as many as four or five in the tournament at one time. … That’s what we should be,” head coach Steve Fisher said.

SDSU has made it to three straight MW Tournament finals, but hasn’t won it since 2011.

After beating University of Nevada Friday in the tournament semifinal, senior forward Skylar Spencer, the now-winningest player in school history, said winning the tournament was the last thing he wanted to check off his list.

The looks on his and senior forward Winston Shepard’s faces in the final seconds of the game gave it all away.

Two of the most iconic and victorious players in the school’s history never got to cut down the nets in Las Vegas. They were as shocked as the loud Aztec faithful that made the Thomas and Mack Center a quasi-Viejas Arena.

“We had chances. We didn’t lose, we got beat,” Fisher said. “We fought. Fresno won the game. They made plays.”

Early on in the game, the Aztecs were in control thanks to sophomore forward Malik Pope.

Pope was a menace on the boards and his 3-point shooting jolted the team out into an early lead.

He would end the contest with a 19-point, 11-rebound double-double.

He, along with Shepard and sophomore guard Trey Kell, made the all-tournament team.

Other than Pope, though, no other Aztec hit a 3-pointer and that kept the Bulldogs within striking distance the whole contest.

One of the team’s better 3-point shooters, redshirt-junior guard Matt Shrigley, didn’t play a single minute in the game.

Fisher said that it had nothing to do with his physical health, and was just a matter of the eight guys he wanted to play.

“In hindsight I wish that I had put him in. But I didn’t,” Fisher said.

Fresno State capitalized on that striking distance, as the Aztecs weren’t able to hit a field goal the the last 3:27 of the game.

Senior guard Julien Lewis’ 3-pointer with 1:36 left gave Fresno State the lead and it wouldn’t look back as the team cut down the nets and punched its ticket to the NCAA tournament.

SDSU committed 15 turnovers, but it has won while committing more. What really hurt the Aztecs was the timing of the turnovers.

Three turnovers were committed in the final three minutes, opening the door just enough for the Bulldogs.

“We just didn’t take care of the ball like we should have,” Shepard said. “We should have been better with it. Give credit to them.”

“To their credit, they’re the best team in the league at forcing turnovers,” Fisher said.

Fresno State will now get the chance to play in its first NCAA tournament since 2001.

Whether the Aztecs will be joining them is up to the committee.

That committee will come to a decision at 2:30 p.m. Sunday on CBS.