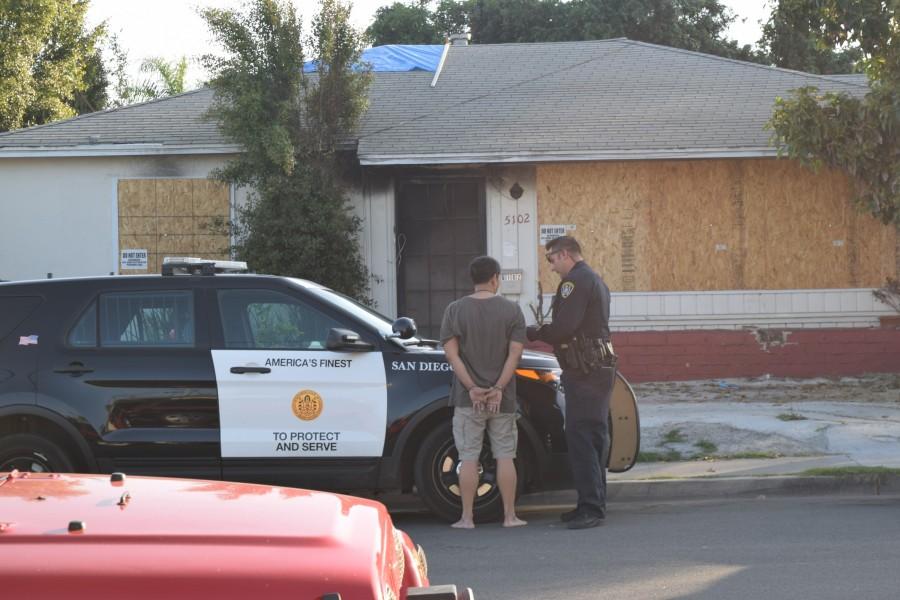 Shortly before 5 p.m. on Thursday, March 17, approximately 15 police officers, including members of the SWAT team, descended on a house on the corner of Ewing and Tipton Street, where they made nine arrests for various narcotics violations.

Sgt. Terharr with the San Diego Police Department’s narcotics division said police had received numerous complaints of drug sales at the house, which is three blocks from San Diego State.

SDPD was able to verify the claims. They obtained a warrant to search the premise, where they found that many people were living there illegally and selling drugs out of the home.

The house, which has boarded-up windows and numerous “Do Not Enter” signs posted on all sides, is supposed to be abandoned thanks to a fire last December, but Terharr said the police found 10 makeshift entrances to rooms where people had been squatting.

In addition to the drug violations, police found many illegal modifications to the home, such as makeshift electrical wiring, which can be a significant fire hazard. SDG&E, the city zoning department and permit department are also being called to inspect the house.

“We’re in the process of working with the city to abate the home,” Terharr said. “That would mean we would notify the owners of the home that it’s totally uninhabitable because of the structural violations, and hopefully it would be demolished and rebuilt.”

“I heard yelling, so I looked out my window, which faces the house and I saw close to 15 cops running in,” she said. “They were searching for people. One officer had a gun, and he was yelling for people to get out.”

Of the 12 people detained by police, nine were arrested for narcotics violations. Nearly two hours after officers arrived, they were still searching the home and questioning the detainees. None of the detainees or arrested suspects are SDSU students, according to the police.