What’s on the horizon for SDSU men’s basketball? 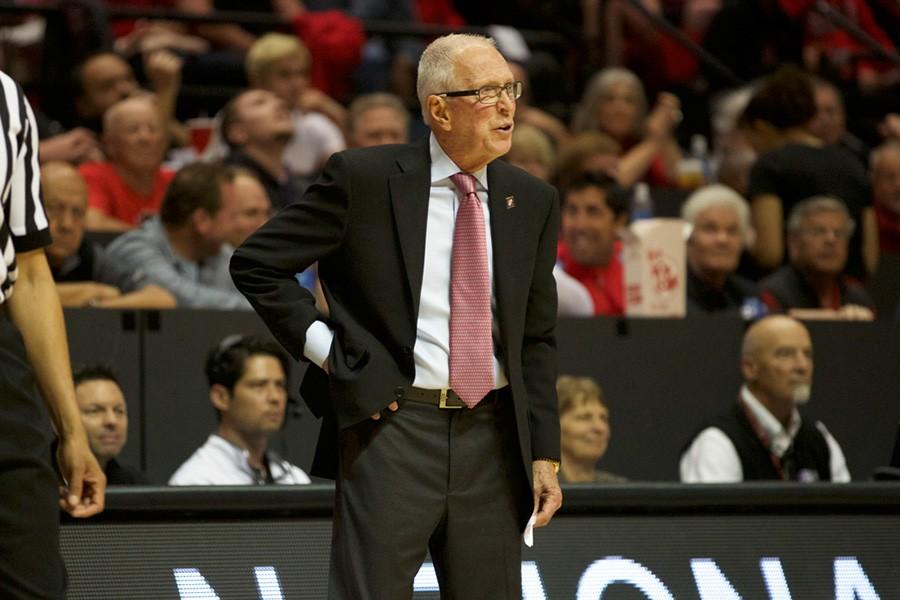 As seen year in and year out, college basketball is a sport based on transitions.

Transitioning within each season, from nonconference to conference play, and later into postseason play.

And, a more challenging venture, transitioning between classes of student-athletes.

In a one-and-done college culture, having strong recruiting classes each and every offseason is becoming exponentially more important to the sustained success of a program.

With that in mind, the class of players coming to SDSU in 2016 is valued highly.

With signing day still to come, the Aztecs have locked in four major keys to maintaining their success in the 2016-17 season.

McDaniels, who’s ranked as the No. 1 power forward in the state of Washington by Scout.com, has been praised for his length, and has a very similar build to current SDSU sophomore forward Malik Pope.

At 6-foot-9,  his talent lies in his versatility, much like many of the players that have come through Montezuma Mesa, such as Shepard.

“Jalen is a guy that can play all five positions,” Federal Way High head coach Jerome Collins said to The Seattle Times on Dec. 12 last year. “He’s multidimensional. He can cover the point.”

This past season, McDaniels led Federal Way to a 24-0 record and the second state title in the history of the program.

McDaniels is a player who knows what it takes to win, something that the Aztecs will have to do more of next season if they want to make it back to the NCAA tournament.

The other rookie in the bunch is freshman forward Nolan Narain, who redshirted this season.

Hailing from the land up north, the Canadian product is the No. 63-rated player by Rivals in the 2016 class.

The 6-foot-9  forward is evaluated as a solid offensive prospect who is just as effective in the post as he is on the perimeter.

He has a similar build and skill-set to McDaniels, but because he graduated from high school a year early, Narain has had the advantage of spending the last year on the SDSU scout team, playing against and alongside the scholarship players on the roster this season.

SDSU head coach Steve Fisher said his inclusion on the scout team has been crucial not only for Narain’s development, but also for the growth of the current team.

“Now when you can put in Montaque Gill-Caesar, Max Hoetzel and Nolan Narain, three guys that we expect to be on the floor a year from now, they can really play. They can emulate what the opposing team is going to do and you better guard them or they will make you look bad,” Fisher said after beating UNLV on March 5.

“It is invaluable, and it has tremendous merit and benefit.”

The other two players that played on the scout team in 2015-16, Gill-Caesar and Hoetzel, are following in the footsteps of recent Aztec greats who transferred to the Mesa.

Each of the past three years the team has had a senior who transferred to SDSU with Xavier Thames in 2014 (Washington State), JJ O’Brien  in 2015 (University of Utah), and Angelo Chol this season (University of Arizona).

Each had an integral role in the Aztecs reaching two NCAA tournaments and one Sweet 16 appearance over the last three seasons.

Due to NCAA transfer rules, though, Gill-Caesar and Hoetzel were limited to just practicing with the team this season.

Gill-Caesar, coming to SDSU from University of Missouri, averaged 9.1 points and 3.0 rebounds in 24 minutes per game in the 2014-15 season.

The Tigers did not perform well for the 6-foot-6 guard’s first collegiate season, finishing with a 9-23 record.

He will add to the already-talented backcourt in freshman Jeremy Hemsley and sophomore Trey Kell, assuming they both stay for another year.

Gill-Caesar’s length makes him an X-factor, standing at least two inches taller than the both Kell and Hemsley, which is perfect for the press defense that coach Fisher employs from time to time.

The other transfer, Hoetzel, from Indiana University, will be a part of the trio that will attempt to fill the holes left by Shepard, Spencer and Chol.

Hoetzel, who played his high school ball in Calabasas,  spent one year with the Hoosiers, scoring 2.4 points per game.

He will pair with redshirt-junior forward Matt Shrigley and freshman guard Ben Perez as a sharpshooter for the Aztecs.

This season, SDSU lived and died by the 3 at times, but the team as a whole shot .319 percent from deep.

His shooting, along with the efforts of Gill-Caesar, Narain and McDaniels, will be integral for another seamless transition for SDSU.