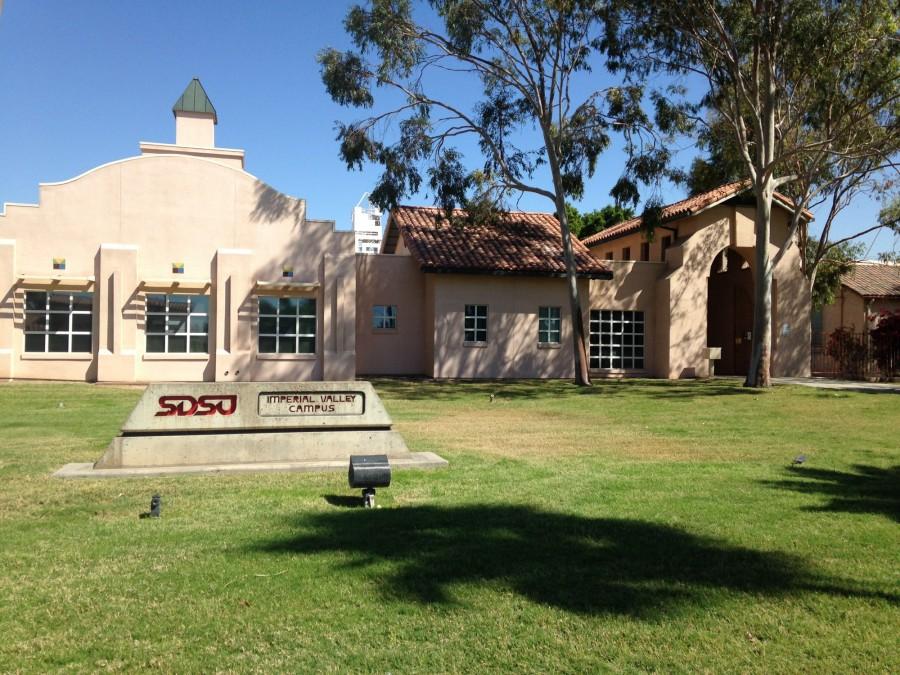 The students of the Imperial Valley Campus may be nearly a two-hour drive from San Diego, but they want you to know they are Aztecs, too.

And in truth, you can find Aztec pride on this campus just as you can in San Diego. Students here walk around in the same Aztec gear sold at the main campus.

The primary IV Campus utilizes the former campus of the Calexico High School, which had grown too large for the space. There is another smaller facility in the town of Brawley about 20 minutes north.

Anyone can apply, but the IV Campus primarily serves students from the surrounding agricultural towns of Imperial County, including Brawley, Imperial and El Centro, in addition to Calexico. The entire 4,482 square mile county has a population of less than 200,000, a lower population than the city of Chula Vista.

While the campus is able to offer only 12 majors, including  criminal justice, mathematics and history, due to its small size. But its size can also be an advantage.

“I do like the small feel of it, and the community feel of it … it’s secluded, it’s like a fortress in the middle of the city,” said David Lopez, Associated Students President of the IV Campus.

The campus does have a small community feel to it. Every student Lopez passed seemed to know him, something that would likely not be the case at the main campus.

“I wish it would offer more programs,” Lopez said. “International business is a huge thing that the Valley does need.”

International business is one of the majors offered by the campus, but the website indicates that applications for this major are no longer being accepted.

A.S. also tries to make up for the campus’ size by offering many school-wide events. This includes an art gallery event on Thursday and an A.S.-sponsored trip to Disneyland. A.S. also puts on school-wide sports tournaments.

“We want to provide as much of a college experience for our students as possible,” Lopez said.

The IV Campus is also able to accept 100 percent of qualified applicants and has a 93 percent freshman retention rate, two things that no other California State University campus can boast.

“If (applicants) meet the requirements, they are not going to be turned away,” said Miriam Castañón, director of Student Affairs.

Many of the IV Campus students are transfer students from the local community colleges who also work. In order to cater to these students, there are only four class blocks per day. Classes meet once per week.

Another unique aspect of the campus is that local judges and one local law enforcement official teach classes for the criminal justice program. It is similar for the other departments — many professors are also local professionals.

Lopez said he would like to fix or replace signage and build a new structure for Student Affairs, which is currently housed in a set of portables.

And recently, the campus’ Interim Dean Gregorio Ponce donated his car allowance to the school in order to purchase a new digital marquee.

There are many differences between the San Diego and Imperial Valley campuses. They are in two distinctly different regions and have wide variations in demographics, campus feel and funding, not to mention the distance.

But Lopez said despite this, he would like to see “more connection” between the two campuses, more shared activities and experiences, and more awareness of the IV Campus, because the Aztecs down in the Valley are just that — Aztecs.