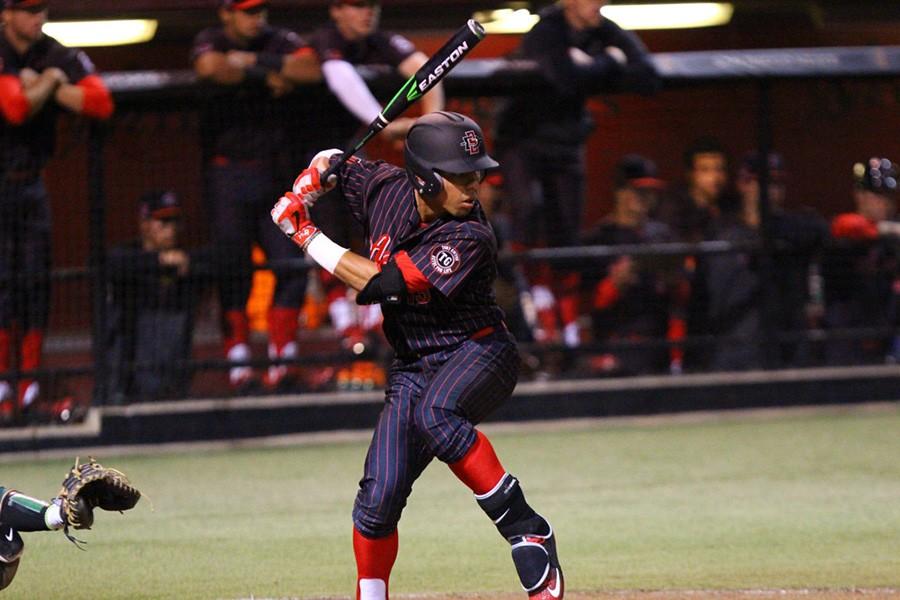 The Aztecs (4-15) could never get things going offensively, and despite having runners on base in each of the final three innings, could not close the deficit they faced all game.

Aside from one inning, the game lacked major excitement or drama, two things that the Aztecs have specialized in this year, even if it doesn’t always go their way.

A silver lining to take from this game is the containment of the Lobos’ offense, as they have only been held to five runs or fewer four times this season coming into this game.

Junior pitcher Marcus Reyes, who threw four innings of scoreless ball in relief, spoke about what his team can do to limit New Mexico in the remainder of the series.

“We have to keep pounding the strike zone,” Reyes said. “We exploited them big time today. If we get ahead with the fastball and offspeed pitches, they will be scrambled up there.”

All of that being said, New Mexico still started hot, as it struck first with an rbi single from sophomore starting pitcher Luis Gonzalez, taking a 1-0 lead.

Gonzalez, in tune with the rest of the New Mexico lineup, has been hot this season, whether he is featured in the field or on the mound.

He has hit .384 this year with 10 rbis – two coming on Thursday night – from the Lobos’ leadoff spot.

Before the Aztecs had a chance to rebuttal from the third-inning run, New Mexico landed a wave of punches in the fifth inning.

The Lobos started the inning by loading the bases, and sent one run home on a single to left field by senior shortstop Dalton Bowers.

Luis Gonzalez notched is second rbi of the night on a sacrifice fly, and New Mexico sent home two more runners to extend its lead to 5-0 over SDSU.

The Aztecs responded in the bottom of the inning, as sophomore third baseman Justin Wylie added to his team-leading 15 rbis with a double down the right – field line, scoring sophomore second baseman Andrew Brown.

SDSU added one more run in the frame, closing the game to 5-2.

The best chance for the Aztecs came in the eighth inning, when they began the inning with a single by sophomore shortstop Alan Trejo, who subsequently made it to third base with some savvy baserunning.

The hit extended Trejo’s current hitting streak to 15 games, the best streak and SDSU player has had in 2016.

Freshman designated hitter Dean Nevarez then drove in Trejo on a sacrifice fly, making the score 5-3.

After two walks gave the Aztecs runners on first and second, freshman first baseman struck out, closing the inning, and their best shot at making a comeback.

Alan Trejo talked about what held back SDSU from closing the gap in the eighth inning.

“We need to relax in certain situations,” Trejo said. “We’re trying to do too much, but we need to let the game come to us.”

Head coach Mark Martinez, who looked visibly upset after the Aztecs’ fourth straight loss, and fourth loss in the young MW conference season, spoke about what his team has to do to improve in this series.

“We have to find a way to get tougher mentally,” Martinez said, “and manage our at-bats. We are playing to out record, and we have to eliminate that.”

SDSU will get its second chance against New Mexico on Friday night, as it will try to end a four-game skid.