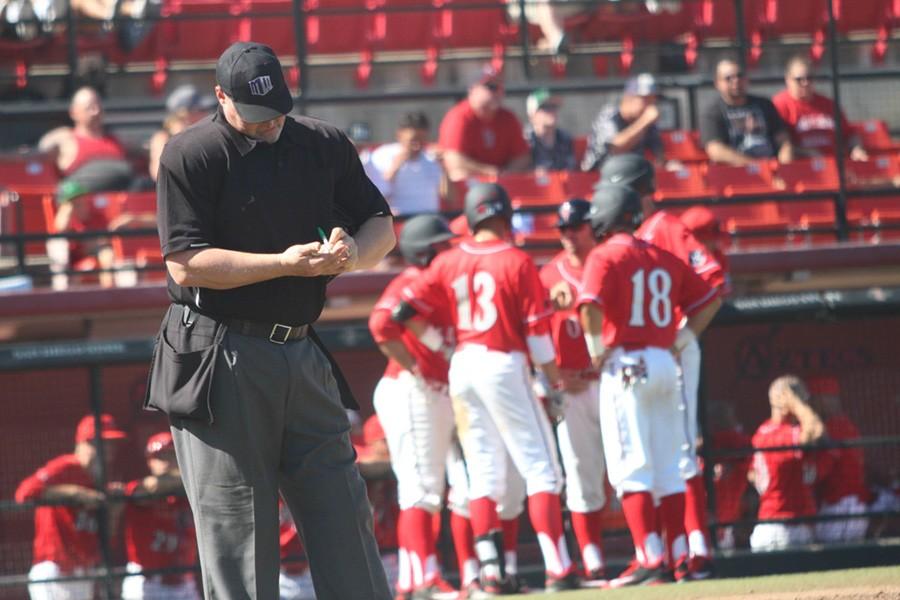 After defeating No. 20 Long Beach State on Tuesday, the Aztecs look to make it two in a row as they begin a three-game series with UNLV on Friday.

It’s the first meeting between the two teams this season, and starts the only series they’ll play against each other in the 2016 campaign.

Both squads have struggled going into the deep part of the season, with the Rebels (11-17) standing four wins above the Aztecs (7-19) in their overall record. UNLV also holds the advantage in conference play, coming in at a 4-8 clip compared to SDSU’s 2-7. The Rebels are fifth in the MW, while the Aztecs are two spots behind them in last place.

UNLV is going for their third win in a row coming off victories against New Mexico and Grand Canyon University, the former of which ended a seven-game losing streak for the Rebels dating back to March 19.

Though this season hasn’t exactly gone the way the Aztecs anticipated, there have been many bright spots throughout the young roster, most notably sophomore shortstop Alan Trejo.

Currently, Trejo is the best hitter on the team with a .324 batting average  to go along with 36 hits. Sophomore infielders David Hensley and Justin Wylie are also holding their own as well.

Other players of note are senior outfielder Spencer Thornton, who is slugging .407, redshirt-sophomore outfielder Tyler Adkison, who has 15 RBIs and freshman infielder Jordan Verdon, who has a .374 on-base percentage

For the Rebels, Payton Squier and Kyle Isbel have lead the way on offense. Both hold the top averages for UNLV at .369 and .321 respectively. Corey Pool leads the team in RBIs with 18.

While the Aztecs haven’t necessarily struggled on offense, their pitching isn’t the same case and will be the main focus against a UNLV staff that has equally struggled. SDSU’s best pitcher has been redshirt-freshman Harrison Pyatt, who owns a 3.44 ERA. His counterpart on the Rebels, Kenny Oakley, has thrown the most innings for UNLV and comes in with a 3.89 ERA. Aztec freshman right-hander Chris Collins has impressed in a smaller sample size, recording a 0.90 ERA in 10 innings.

The Aztecs and UNLV start their three game series at 6 p.m. Friday at Tony Gwynn Stadium. It continues into Saturday and Sunday with start times of 2 p.m. and 1 p.m. respectively.