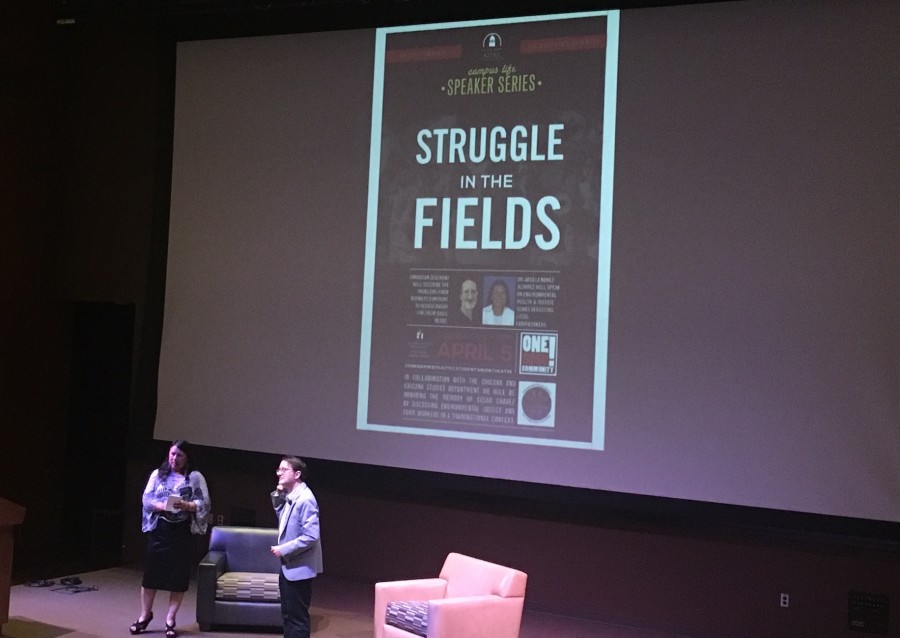 The One San Diego State Community teamed up with the Chicana and Chicano Studies Department to honor the memory of Cesar Chavez by introducing two guest speakers to participate in a discussion with students on April 5 in the Conrad Prebys Aztec Student Union Theater.

Arcela Nuñez-Alvarez, a research director at CSU San Marcos, discussed her experience with farm working families and the difficulties they face today. Christian Zlolniski, director for Mexican American Studies at the University of Texas Arlington, focused on the absence of clean water in the homes of farm working families.

“Cesar Chavez’s words to us now are we have an awful lot of work to do,” said Maria Ibarra, an associate professor in the Chicana and Chicano Studies Department at SDSU. Ibarra also moderated the discussion.

Nuñez-Alvarez started off by explaining she was the daughter and granddaughter of farmworkers in Mexico and came to San Diego when she was 12. She then showed several images that reminded her of the fight for farmworkers.

The first image illustrated men carrying a man in a coffin. The man in the coffin was Rufino Contreras, and he was killed by an armed foreman in 1979 while striking on an Imperial Valley field.

“It’s not easy seeing people struggle and be humiliated,” Nuñez-Alvarez said. “Rufino is a constant reminder to stand up when we see injustice.”

The second image showed a man working on a plantation with his three to four year old son. She used this as an introduction to examine the conditions the farmworkers of Imperial County live under.

Imperial County is part of the Southern California border region of California and is approximately 130 miles east of San Diego.

It’s a $1.8 billion agricultural industry, but Nuñez-Alvarez said farmworkers are the lowest paying sector of the economy.

“This is a part of the community that isn’t counted,” she said. “We don’t know how many farmworkers there are in Imperial County, San Diego or in the U.S. They’re not counted.”

Nuñez-Alvarez also said Imperial County has the highest asthma rate in California because of the contamination in the air.

“I’ve walked through this and seen the smoke lingering,” she said.

Nuñez-Alvarez then described a research study she was involved in that identified homes located next to canals. They found sectors where people don’t have access to any clean water.

Zlolniski then concentrated on the lack of clean water in farm-working communities, especially in the area of San Quintin, in Baja California.

He shared images revealing communities living in poverty, trying to filter the water they fetched from a water well themselves.

In March of last year, farmworkers in San Quintin went on strike and demanded higher wages, labor benefits such as health coverage, the power to own independent unions, better treatment and better conditions such as access to clean water.

As a result, two independent labor unions have been formed in 2016 and two desalination plants in Baja California are set to launch in 2017. One will be down the coast in San Quintin.

“This has been a major change and accomplishment in decades,” Zlolniski said. “Access to water is a basic universal right, and it’s treated as a commodity.”

Zlolniski continues to work in farm working communities and has written books based on his efforts and experiences such as “Janitors,” “Street Vendors,” and “Activists: The Lives of Mexican Immigrants in Silicon Valley.”

“These are the communities that have produced leaders like Cesar Chavez. We all have the human rights to life, dignity and the ability to fulfill our basic human needs,” Nuñez-Alvarez said.

The One SDSU Community will hold a collegiate dialogue in Templo Mayor in the Conrad Prebys Aztec Student Union on April 26 from 4 to 6 p.m. to discuss the role of diversity on campus.