SDSU baseball swept by No. 14 Texas Tech with 7-2 loss 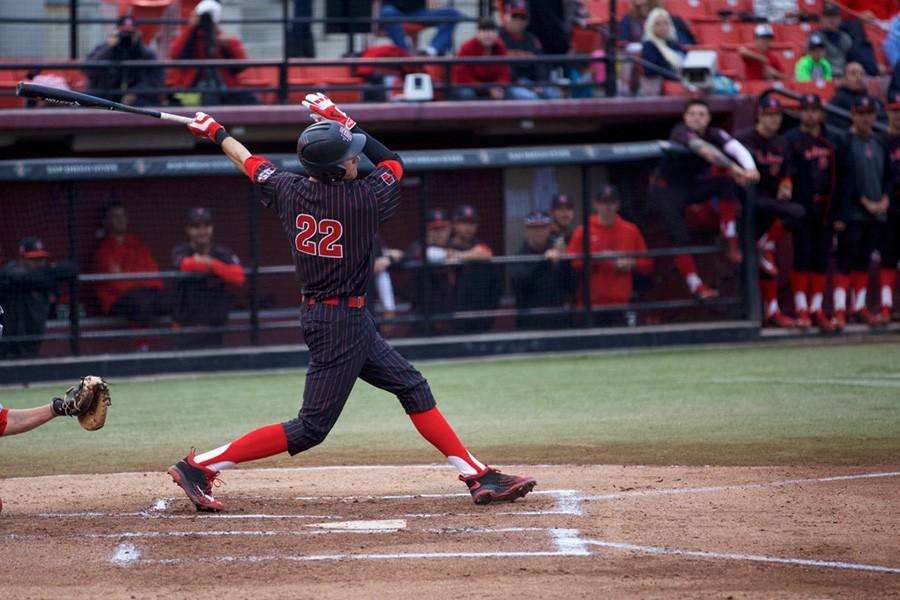 San Diego State baseball followed up its first three-game winning streak of 2016 by being swept in a three-game weekend at the hands of No. 14 Texas Tech University, culminating in a 7-2 loss Sunday afternoon.

The loss gives the Aztecs (10-23) the most losses of any team in the Mountain West, sharing that title with San Jose State.

Each game in the series against the high-powered Red Raiders (29-9) told a different story, but all had the same outcome.

Sunday’s match up was more contested than Saturday’s, but a Texas Tech win was never truly in doubt.

The game saw its first runs in the second inning, when the Red Raiders took a 2-0 lead, which they stretched to 5-0 before the Aztecs could record a hit.

SDSU got on the board in the fifth, an inning that started with a leadoff double from sophomore third baseman Andrew Brown.

Brown moved to third base on a single by sophomore right fielder David Hensley — the only other Aztec besides Brown to record a hit in the game.

Hensley scored once more on a throwing error by Texas Tech sophomore second baseman Michael Davis, making the score 5-2, but two insurance runs for the Red Raiders put the game away.

Aside from their two-run fifth, the Aztecs had only one hit and five total base runners, continuing the theme of offensive inefficiency that plagued them throughout the series.

SDSU was outscored in the weekend by a mark of 20-3, its worst series output on the season.

At times the Aztecs have shown flashes of promise, such as when they upset No. 7 Oregon State on the road behind a ninth inning home run from sophomore shortstop Alan Trejo.

But these flashes have been nothing more, as sustained success has not come easy for the young team.

Despite all their struggles, the Aztecs still have a shot to make a fourth consecutive NCAA tournament, as they play five more series against MW teams, beginning with a three-game set at first place University of New Mexico starting on April 22.

Before it can face the MW rival, SDSU will try to get back on track, as it plays UC Irvine at Tony Gwynn Stadium Tuesday night.