Painting professor creates art and sculpture from flesh and bone 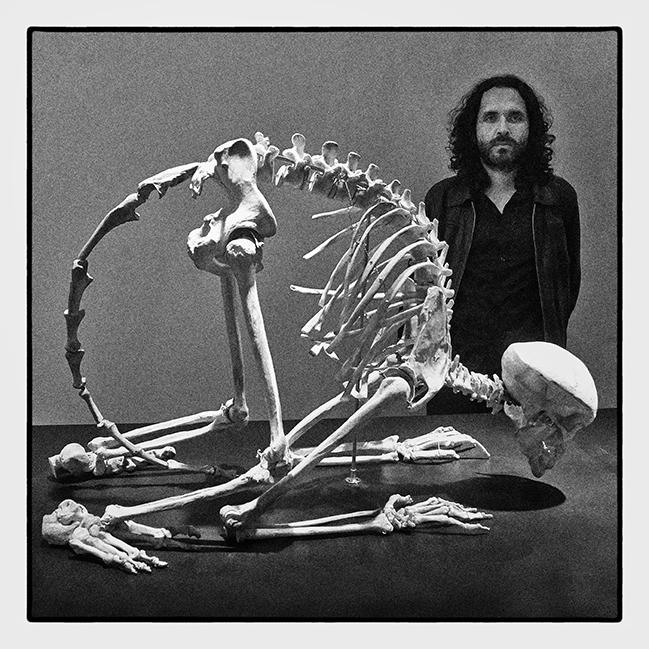 Nestled behind the Hardy Tower and the Professional Studies and Fine Arts building lie the art buildings. In these buildings there is a door camouflaged by a fierce and fiery mural of eyes. Through this door resides the office of the excitingly original and imaginative professor, Carlos Castro Arias.

Originally from Colombia, Arias has dared to provoke shock, awe, curiosity and discussion with his art.

He describes himself as a painter, a sculptor, a videographer and an artist who enjoys trying all mediums.

“A common thing in my work is to use elements that have a history, meaning or some other interpretations,” Arias said.

However, these elements are not for the faint-hearted. For example, after a recent visit to Mexico City, Arias was inspired by the architecture and humanistic qualities. In an attempt to capture the human and personified aspects of the city, he used human fat as a varnish for the painting.

Another notable piece is his creation of musical sculptures crafted with confiscated knives from the city of Bogota, Colombia. Arias even has a piece showcased in his office of a sculpture resembling a bag of popcorn, the kernels made entirely of human teeth.

“There is a lot of meaning in objects that are thrown away, so that inspires me to create new possibilities,” Arias said.

Arias has toured around the world to exhibit his art and continues to showcase his work while being a professor. He has exhibited his art in various places throughout Europe, New Zealand and South America. Even with Arias’ busy schedule, he has an upcoming exhibition planned in Miami this September.

Because of his explorations around the globe, Arias has been able to observe how art differs in various regions. In his pieces, he symbolically re-contextualizes found objects and images of his environment, some of them highly socially and politically charged, to create new narratives.

“Many art pieces in Colombia are related to political conflicts and social commentary,” Arias said. “Here in San Diego, you tend to see things that are a little more relaxed and a little more ‘San Diego.’”

Arias teaches the basic course levels of Painting I and Painting II but provides his students with an advanced set of skills and advice.

“As a professor, Carlos is a passionate teacher with a penchant for seeing each student’s different, hidden potential,” mechanical engineering senior Alex Lee said.

Arias’ students describe his teaching as direct and straightforward, and his criticism is always constructive and detailed. Arias said that he encourages his students to explore and try different things with their art.

“He is someone who doesn’t hold back what he wants his students to learn,” Lee said. “He has us do multiple painting styles such as still life, abstract, landscape and surrealism while encouraging each of us to have our own personal touch.”

Last semester, Arias’ students took part in creating a mural which can now be seen in the library, and this semester his students are making interactive sculptures around campus.

Arias admits that living as an artist can be very challenging, but he encourages his students to have passion for the work they create.

“You need to be your own boss, create your own schedules and have passion to create what you do,” Arias said. “But at the same time, it’s such a huge reward when you get to show your work.”

To succeed in the field of art, it is imperative to be taught by individuals who excel and have redefined the field. Arias is a testament to this ferocity.

“Because of him, I’m no longer nervous about painting,” Lee said.