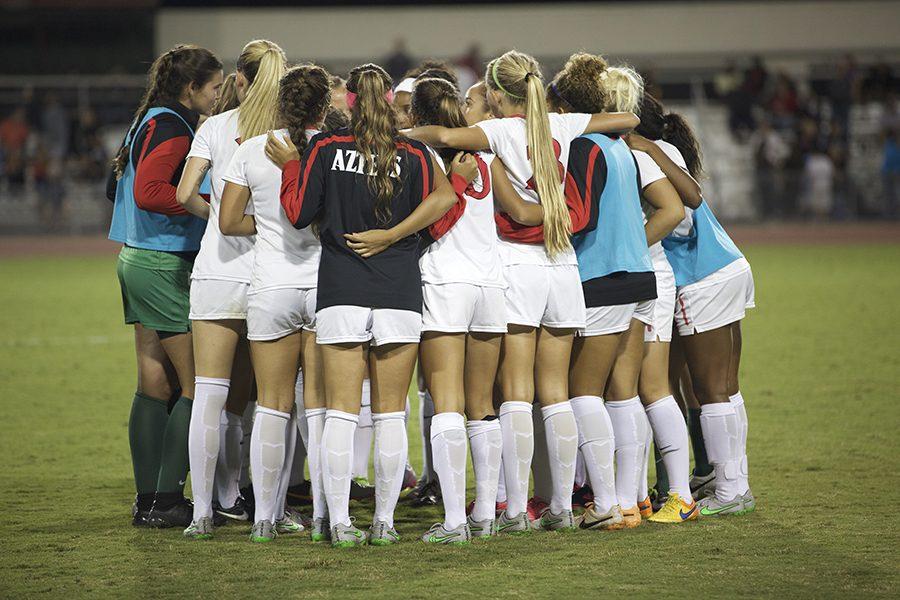 Amidst its grinding spring, the San Diego State women’s soccer team continued one of its greatest traditions on April 16.

Once a year, during the offseason, the team takes time to honor its past, celebrate its present and anticipate the future of the program in the annual alumni game.

The game pits former SDSU women’s soccer players against the current squad in a full 90-minute match. For this year’s game, more than 30 former players showed up to participate, and the match was played under the lights at the SDSU Sports Deck for the first time.

SDSU head coach Mike Friesen cherishes the tradition, because it reconnects him with his history on the Mesa.

“For me personally, this is an awesome event because I get to see a lot of players I’ve coached over the last 12 years of being here, and I’ve actually been able to build some relationships with the girls that played here previous to me being here,” he said.

One thing Friesen finds entertaining about the alumni game is that his former players still play with the same tendencies and still have the same personalities they had in college.

“It’s fun to see them come back and play the same way they did before,” he said, “Their fitness is not quite as good as it used to be, but their technique and the way they play are still the same.”

In one instance, Friesen warned his team to watch the back post when 2012 All-American midfielder Megan Jurado had the ball. Sure enough, Jurado’s next shot ricocheted off the back post.

Although the game itself usually is meant to be for fun, this year’s match was entertaining, and both teams kept a solid level of intensity. But unfortunately for the alumni, their homecoming wouldn’t end with a victory, suffering a 3-2 defeat.

Junior forward Dani DeRosa put the Aztecs on the board first, after she finished a cross from senior midfielder Gemma Craine.

Trailing 1-0 at halftime, the alumni were able to turn it up after the intermission. Forward Haley Locker put the alumni on the board early in the second half, after she was able to weave her way through the Aztecs’ defense and fire a turnaround shot past sophomore goalkeeper Kate Hart.

Locker was a part of three consecutive Mountain West Tournament championship teams from 2012-14, and scored 12 goals along with 18 assists in her SDSU career.

Shortly after, the alumni took the lead following a goal from Theresa Stogsdill. Stogsdill, a defender who graduated in 1994, was a member of the first Division 1 team at SDSU.

After graduating from SDSU with a degree in liberal studies, Stogsdill played soccer for 15 years, coached at Mt. Carmel High and a nearby club team, and currently teaches at Westwood Elementary in Rancho Bernardo.

In fact, Stogsdill has ties to the current Aztec players. She was the fifth grade teacher of graduating senior defender Ashley Hauke.

Stogsdill’s goal gave the alumni some hope, but it was short-lived after senior midfielder Victoria Barba scored two quick goals against her former teammate, goalkeeper Melanie Vaughn, to put the Aztecs in the lead for good.

But at the same time, Mitchell was happy her team was able to pull off the victory,

“We want to beat the alumni, obviously” Mitchell said. “We want to show them who’s boss.”

Other notable alumni on the field were forward Cat Walker and goalkeeper Linnea Quiñones.

In 2009, Walker was named the MW Offensive Player of the Year and MW Tournament MVP.

Quiñones was a first team all-conference goalkeeper in her time at SDSU. Prior to playing at SDSU, Quinones was the starting goalkeeper for the Mexican national team in the 1999 Women’s World Cup.

In addition to providing reconnections, Friesen believes this event serves as an opportunity for his team to make connections for their futures, and exemplifies the family environment he preaches.

“We really try and make it to where this is an environment where we’re close,” Friesen said. “There’s a lot that can go into that in terms of having someone that’s been through the life stages that they’re going to go through.”

If one thing is for sure, the event is the epitome of what it means to be called an “Aztec for Life.”

“I feel like we earned a spot here to be part of the legacy for women’s soccer, and I feel connected,” Stogsdill said. “I feel like it’s a part of me.”