‘The BFG’ shares wonder to theater lovers of all ages 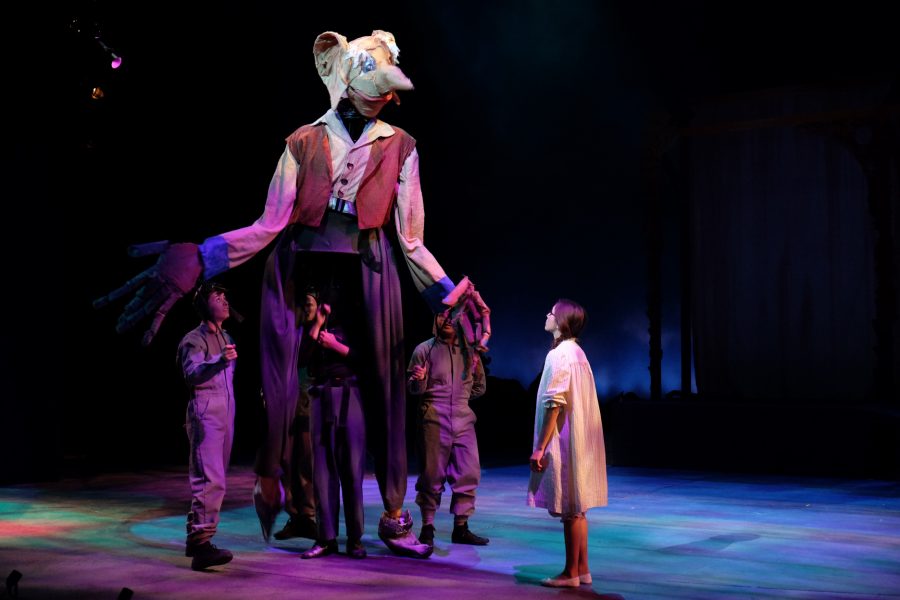 Courtesy of SDSU School of Theater, Television and Film

Prepare to be whisked away to the days of wonder and childhood with the School of Theatre, Television and Film’s production of “The BFG.”

Taken from the beloved children’s story, the stage production tells the tale of a little orphan girl, Sophie, and a loveably large Big Friendly Giant, known as the BFG. One night, Sophie sees the BFG roaming the streets with his huge trumpet-like object, blowing dreams into the minds of children. The BFG snatches Sophie away with him and travels back to his homeland of Giant Country. There, Sophie learns all about the BFG’s ways, and the two quickly become friends.

“‘The BFG’ highlights the importance of storytelling and the power of imagination,” said assistant show director and choreographer Elena Malekkou.

While the show is conducted in a way that caters to younger audiences, people of all ages are sure to fall in love with the story’s innocence, excitement and pure talent.

“There are many levels to the story,” said show director Margaret Larlham. “Adults will see the layers of connection, and the children will love the action.”

The most unique and memorable aspect of the show was with the performance’s use of puppetry to replicate the towering giants. Along with the actor who portrayed the BFG, the costume was controlled by about four other cast members, who manipulated the BFG’s lengthy arms and legs.

Larlham said the show was a challenge to make, but the design department loved the difficult task of working in puppetry.

Along with working hand-in-hand with the design team, the theater department also teamed up with the film department to record the performance. The convergence of different departments created a multimedia-induced and visually spectacular experience.

On Sophie and the BFG’s journey, the two encounter a group of not-so-friendly giants on the hunt to eat humans. While these giants appear to be terrifying flesh-eaters, their dim-witted conversations and droopy dance moves allowed for a hilarious and light-hearted performance.

Perhaps the most challenging thing for the audience to comprehend was whether or not to look at the faces of the puppets or the actors. Whether it was the BFG, the Queen of England or the Fleshlumpeater, each actor completely immersed themselves into their performances.

The dedication was seen with their spot-on English accents, pronunciations of giant jargon, precision of puppetry and detail in the digital set design. The inventive design team and talented actors delighted audience members of all ages.

The show’s actors encouraged the audience to participate and even invited an assortment of children on stage.

“I grew up reading ‘The BFG,’ and everyone enjoys remembering the days of their childhood,” said child development sophomore Melissa Patel.

The playful cast of giants went out of their way to literally reach into the crowd and provide an up-close and personal experience.

The excitement, curiosity and utter thrill heard through the laughs and comments from the younger crowd was contagious to the older generation in attendance.

“Despite this mischievous story of an idiosyncratic giant exhibiting wayward language skills and somewhat irregular diet, I highly recommend ‘The BFG’ to human beings of all ages to refine their (citizenship),” Larlham said.

Tickets range from $15 to $17 for general admission and students, and children age 10 and under are $10.