The Daily Aztec • May 6, 2016 • http://thedailyaztec.com/77961/news/sdsu-college-republicans-host-david-horowitz-on-campus/ 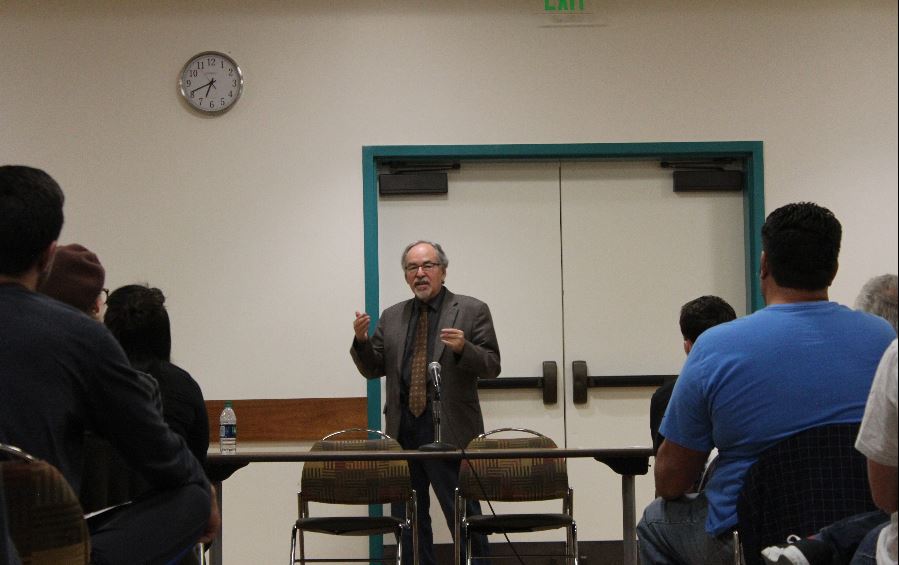 With several police officers surrounding the room and two security guards by his side, David Horowitz visited San Diego State in the Park Boulevard room of the Conrad Prebys Aztec Student Union on May 6 to discuss the role of freedom of speech and to give his reasoning behind posting fliers accusing students and faculty of being “allied with Palestinian terrorists.”

SDSU College Republicans hosted the event and around 90 students and San Diego citizens welcomed him inside the room without being disrupted by protesters, despite a previous warning of a 100-person march by the Muslim Student Union.

“We saw the protester’s side, and now we got to see Horowitz’s side uninterrupted,” said Monique Dela Cruz, publicist for SDSU College Republicans.

Horowitz held a press conference in Montezuma Hall before the event to release his statement addressing the recent protest against President Elliot Hirshman for not condemning the fliers strongly enough.

“From my point of view, the story is about free speech on this campus,” Horowitz said.

He said one of the reasons behind posting the fliers was because access to speaking on a college campus is closed.

“People who are not leftists are as rare as unicorns and the penalty for speaking out on an issue like this is very severe,” he said. “You get called a racist and an Islamophobe.”

“The posters were targeting the BDS campaign which is to get universities to divest from Israel and to strangle the Jewish state,” he said.

He said the BDS movement was inspired by terrorist organizations and is funded by a Hamas network, and his reason for listing specific names is to hold them accountable.

“These are Jew haters. Their agenda is to destroy. It’s genocidal,” he said.

Students listed on the fliers have denied being allied with terrorist groups, and following the protest against Hirshman, students met with him to try to reach an agreement. On May 4, several community members called for him to resign.

Inside the actual event, Horowitz focused on anti-semitism and the lack of control of these organizations in universities.

He said he thought Hirshman should have disciplined the students through suspension or at least a lecture for trapping him in a car and for not practicing civil discourse.

He ended his discussion by revealing why posting the fliers was the most effective way to get his message out.

He said the only way he could get people to listen is through those posters because of the media it reached by “ticking off the left side.”

Because of personal experience, Horowitz said he would not encourage students to be political.

“They should focus their energies on learning and be eager to hear opinions that disagree with them and learn how to answer that,” he said.