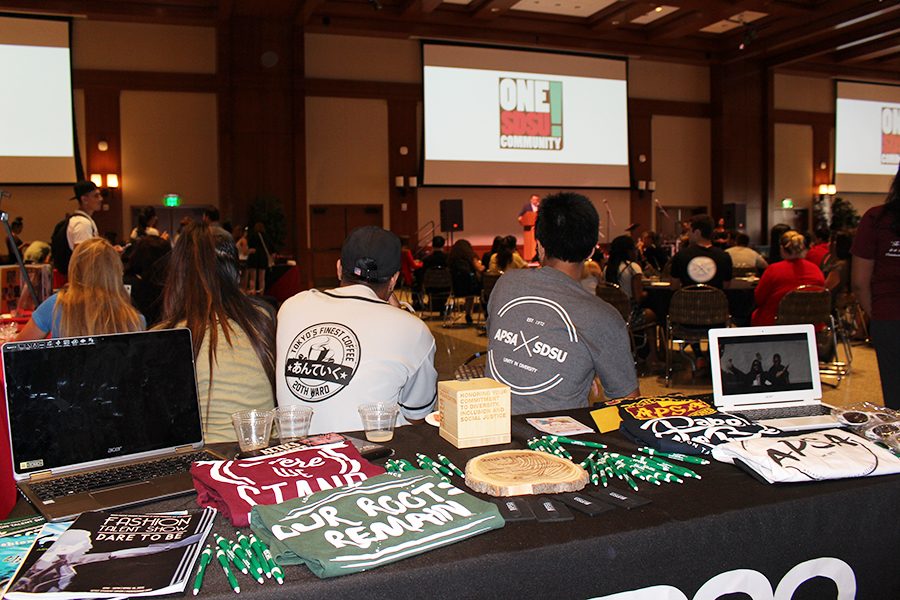 One SDSU kicked off the 2016-17 school year with a cultural community showcase Aug. 29 in Montezuma Hall.

One SDSU is an organization devoted to bringing together various types of students to discover issues surrounding diversity.

With a wide array of on-campus organizations at the showcase spreading awareness about their offerings and resources, One SDSU achieved its goal at the event.

Some of the organizations that tabled at the showcase were Greek life, cultural associations and Associated Students.

Rivera thanked the One SDSU committee chairs Edwin Darrell and Randy Timm, as well as the rest of the community for  organizing the showcase.

In his speech, Rivera highlighted the university’s diversity.

“While many universities are struggling to create diverse, inclusive communities, SDSU is already a pluralistic community,” he said.” Our students come from all different backgrounds and all different experiences.”

A.S. President Jamie Miller also gave a brief speech about One SDSU at the showcase.

“One SDSU events are some of my favorite, because they really bring us all together as a campus,” she said. It’s really powerful to be able to celebrate differences but then also be able to find some of the intersections and commonalities we all have as a community.”

“I’m glad there are more groups involved that aren’t Greek life,” said Christianna Stafford, an anthropology and religion senior tabling for Volunteers Around the World. “When I was a freshman I could only see all these fraternities and sororities, but I didn’t get to see all the other options out there.”

Both she and Elizabeth Begg, a public health senior who was also tabling for the organization, said they were happy with the turnout to the showcase.

“We got some good sign-ups today,” said Stafford.

Echoing other event participants, Alshabazz also said she was impressed with the turnout.

“I see a lot of different student boards. I love to see that on my campus, diversity is everything to me,” she said. “ I love to see the LGBT community out here, the Chicano and Chicana community, the African-American community. It’s amazing.”

Begg did say, however, that she would have preferred for the event to be held outside rather than in Montezuma hall, isolated from foot traffic.

“It’s a great turnout for the first day of school,” AS Vice President of External Relations Dylan Colliflower said. “I’m happy that people stayed around long enough after classes to check out this wonderful event. I hope everyone comes back for the future One SDSU events.”