New theatre professor looks to give back to students 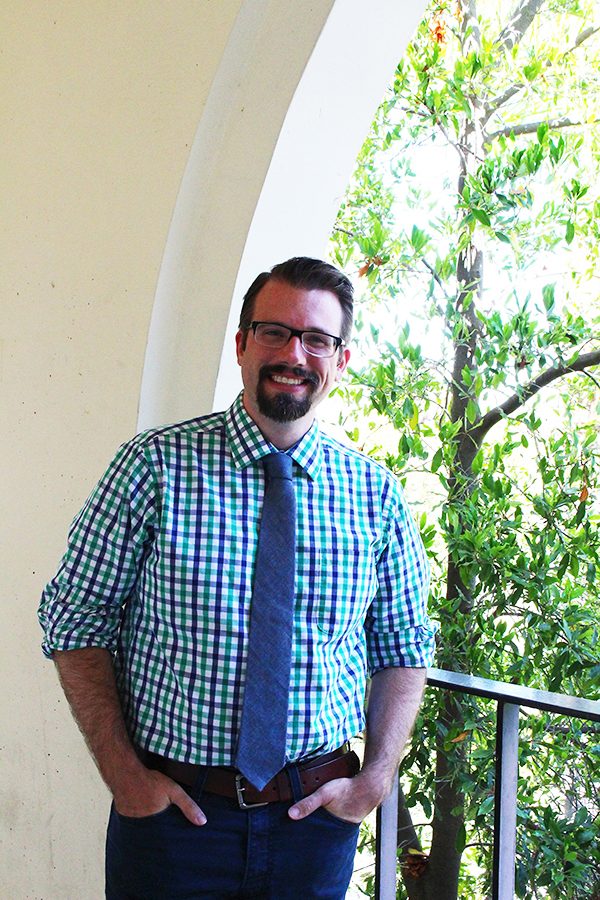 Lucas specializes in design and technical theatre. He is responsible for the look, texture and feel of the scenic environment onstage. He has worked across the country in theatres such as the Shakespeare Theatre of New Jersey, Eastman Opera Theatre, Texas Shakespeare Festival, the Ohio Light Opera and many more.

Lucas’ work as a theatrical designer and artist has been exhibited at the Prague Quadrennial of Performance Design and Space, the National Opera Center in New York City, and others. He has also received the United States Institute for Theatre Technology (USITT) Scene Design Award in 2012 and is a member of United Scenic Artists.

Before arriving at SDSU, Lucas taught at Southern Oregon University and University of North Carolina School of the Arts and has also lectured at Temple University.

Lucas has had an extensive and successful career in the field, but in coming to SDSU he hopes to have the chance to give back to younger artists who are eager to learn more about technical theatre.

“A lot of my career as an artist has been a tremendously positive experience with receiving mentorship, both from other artists who are more advanced in their career and in a formal education setting,” Lucas said. “I’ve had a lot of mentors and I believe very much in mentorship.”

Lucas is currently teaching two classes this semester. One is an undergraduate course called scene design I, which is an introductory course in scene design and the stage. He is also teaching a graduate-level course called aesthetics, which addresses topics such as what makes art, art and what makes beauty, beauty.

“It’s an interesting course for me to teach because I consider myself to be a very practical, no-nonsense person and aesthetics is a very philosophical topic,” Lucas said. “But I’m really happy to take these questions about art and make them practical for students.”

Throughout his years as a freelance scene designer and artist, Lucas has come into contact with many professionals in the field who have admired his work and recognized him as a valuable member on a design team.

Stephen Carr, associate artistic director at Eastman Opera Theatre in New York, praises Lucas for not only staying true to his artistic self, but also for being a flexible team member.

“The creative process is exciting to share with him because he brings so many fresh ideas to the table,” Carr said. “He believes fiercely in his own vision, but at the same time he is also happy to bend and adjust to the needs of the production. He is not afraid to think outside the box, and he comes to the table optimistically focused on the possibilities of what we can achieve, rather than focused on whatever limitations or obstacles may face us.”

Carr also noted Lucas’ attention to detail and his commitment to the stories he tries to tell through his work. His dedication to visual storytelling has not only allowed him to create exceptional art, but has also helped him network with other artists along the way.

Lucas hopes to take his experiences in the field and use them to guide and mentor the students here at SDSU. He will be advising on productions of “Jesus Christ Superstar” this year with graduate student, Ray Leonard, and will also be involved in a few other productions.

To learn more about Lucas or to see some of his work, you can check out his website charlesmurdocklucas.com or wait and see him in action later this year.