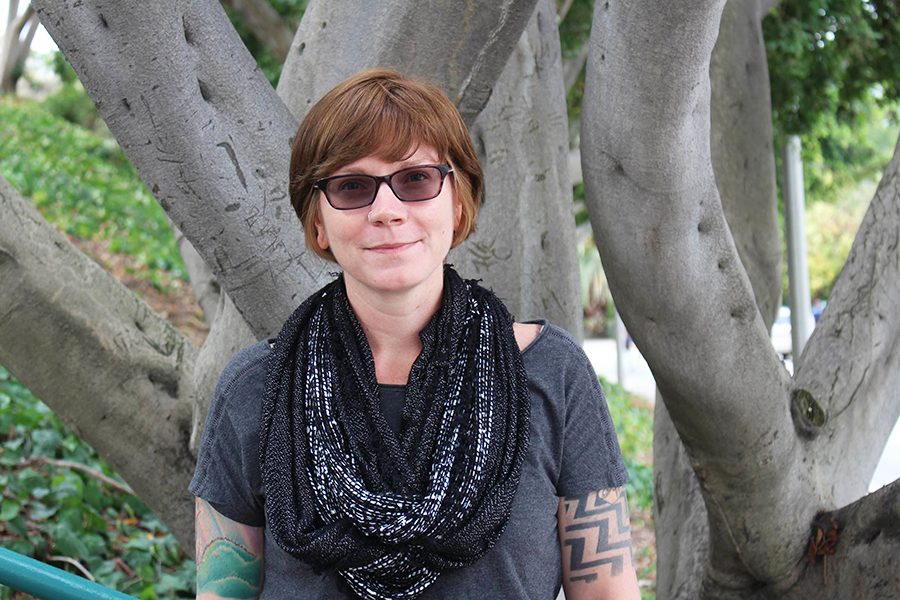 When she got into the literature and humanities field, she realized that none of her professors were focusing on popular culture. She wanted to explore the complex politics and issues of how pop culture is produced and received.

“I found Japan to be filled with this amazing stuff I wanted to dig at, so it just naturally became my preferred venue for exploring how pop culture engages with real world sociopolitical realities and cultural systems,” said Dumas.

Dumas is a new classics and humanities professor at San Diego State who specializes in Japanese literature and culture. Her areas of interest include gender and sexuality in Japanese pop culture, global trauma narrative, digital poetics, science and literature, and feminist, affect and virtual theories.

“We put everyone in a classroom, and we watched her teach,” Kohn said. “Her exercises were so interesting. She had students read Twitter poetry, and she was talking about the effects of the earthquake in Japan on pop culture, which is often something students don’t think about.”

Dumas focuses on how the nuclear bombings in Japan during World War II affect how trauma is dealt with in Japanese pop culture. She explores how contemporary fiction portrays nuclear imagery that contains explicit and implicit references to Japan’s wartime past as a victim of the bombs and its role as an aggressor during the war. Her specialization also engages with gender and sexuality in pop culture and feminist theory.

Dumas wants to show her students that images of beautiful women who turn out to be horrible demons in pop culture teach readers that the material world is just an illusion.

“(This imagery) teaches you to pursue more spiritual truths and endeavors, so the female body has a very complex history of being coated as something natural, spiritual and beyond the patriarchal realm of civilization,” said Dumas.

“We’re living in a very globalized world,” Dumas said. “Corporations, academia and every industry possible is connected with people around the world, and I think that going into interactions with people of another culture informed about some aspect of their cultural history and cultural identity is a really positive thing.”

When Dumas first applied to her current position, she was worried about how the classics and humanities department would view her areas of interest, but once she began to talk about Japanese ghosts and more, she was warmly welcomed with an engaged and enthusiastic department who wanted to learn more about her research.

“I felt that it was such a warming and mutually supportive space,” Dumas said. “I found since you move into these sort of things blind, it’s a little bit of a risk, but I found since I moved here, it’s been nothing but amazing.”