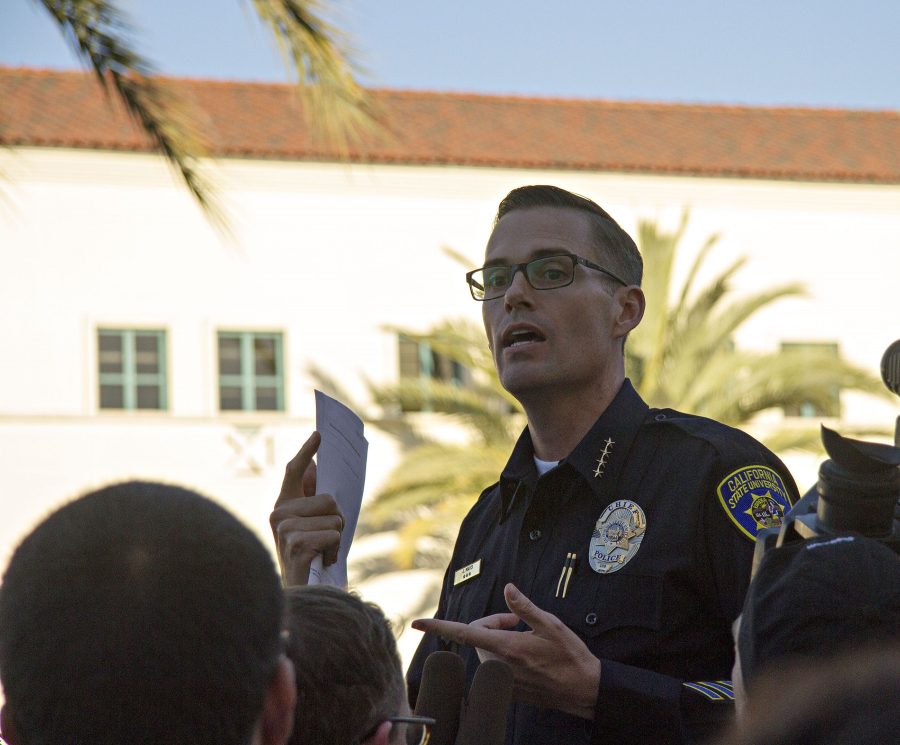 SDSU Chief of Police Josh Mays said university police will make changes to the way they describe suspects to be more racially sensitive.

by Emely Navarro, Will Fritz, Kayla Jimenez, and Jasmine Bermudez

#BlackUnderAttackSDSU These are campus officers and this is a problem @SDSU. This is police brutality. on OUR campus pic.twitter.com/FnceVnkjFy

Students took to social media with the hashtag #BlackUnderAttackSDSU to share the video.

Students in the African Student Union began marching through campus to protest earlier actions by SDSUPD. They were outside Manchester Hall, where the doors had reportedly been locked.

“We’ve heard of things like this off-campus, but for it to be on-campus, especially after we had a dialogue about it earlier, it doesn’t make sense,” communications junior, Ceinna Bush said. “We’re mad, we’re angry, we’re sad. It’s just crazy.”

The dialogue she is referring to is an open forum between Interim Chief Joshua Mays and SDSU students, hosted by the Center for Intercultural Relations this morning.

In the open forum, Mays had expressed a desire to build a better relationship with the SDSU community.

“I know it’s going to explode,” health communications senior, Breanna Bridges said to SDSU administration. “It hasn’t yet, but it’s going to boil over, so you need to do something about it.”

Other students saw the video and joined ASU outside of Manchester Hall.

“There’s pros and cons about the video basically because nobody knows what happens,” senior psychology major, Billy Carter said. “They slammed him hard and he yelled, he wasn’t really fighting back because they were breaking his arm.”

After Mays announced at 5 p.m. that he would return with a police statement, ASU students remained outside of Manchester Hall.

“As the African Student Union we would like to address different political issues that concern people of our community and background,” Archangel said. “We understand officers and their protocol but this is a protocol of us as well. This is us standing in solidarity.”

SDSUPD made a statement outside of Manchester Hall around 5:30 p.m.

“At 12:42, the police department received a phone call of a gentleman that appeared to be under the influence of potential narcotics,” Mays said.

SDSUPD received a second phone call advising that the subject was possibly under the influence of narcotics. Allegedly, the subject also jumped a construction fence at the Cal Coast Open Air Theater, Mays said.

“A staff member who saw the person jump the construction fence and then jump back asked if the person needed help,” Mays said. “There was an exchange between the staff member that concerned them and this staff member also reported this incident to police.”

Officers confronted the individual in front of the Starbucks in the Student Union.

“The officers at that time had determined that they were going to place the individual under arrest based on (his) physical symptomatology of being under the influence of a controlled substance,” Mays said.

When the police tried to arrest the suspect, they said he was uncooperative.

“What happened before and what happened after are still being under investigation,” Mays said.

According to police, the subject was uninjured transported to county jail and booked for under the influence of a controlled substance and resisting arrest.

Officer Mays answered questions from students at the protest about the arrest after making the statement.

“Our main question was why was he being arrested with that level of force,” ASU president, Toni Sparrow said. “Not all of our questions were answered, but once they are, we will be sending out a statement. We don’t disagree with what the officer was saying, we wanted to know why he was arrested in that manner.”

After the protest Viviana Delgadi, a freshman political science major, said she didn’t feel like all of her questions were answered.

“I’m happy the police tried to make the effort to come and talk to the students but I don’t think the questions were very represented of everybody and I think it should have been a little bit longer,” Delgadi said.

She said that she wants them to have another more interactive session with students where more of their questions can be answered.

After hearing what Interim Chief Mays said Delgadi changed her opinion about how the police handled the incident.

“I recognize that at first they are trying to protect us and I really respect them for that but I think it could have been handled a lot differently,” Delgadi. “I like having context for it and I still think they were a little too brutal but I can see why they took the actions that they took.”

Corona said she does not support Mays’ being more present in the CIR.

“Police brutality, students feeling fear, students being affected by on campus police presence and I come out to violence,” Corona said.  “It left me asking more questions. I am holding onto questions that I would like to personally ask Chief Mays,” Corona said.