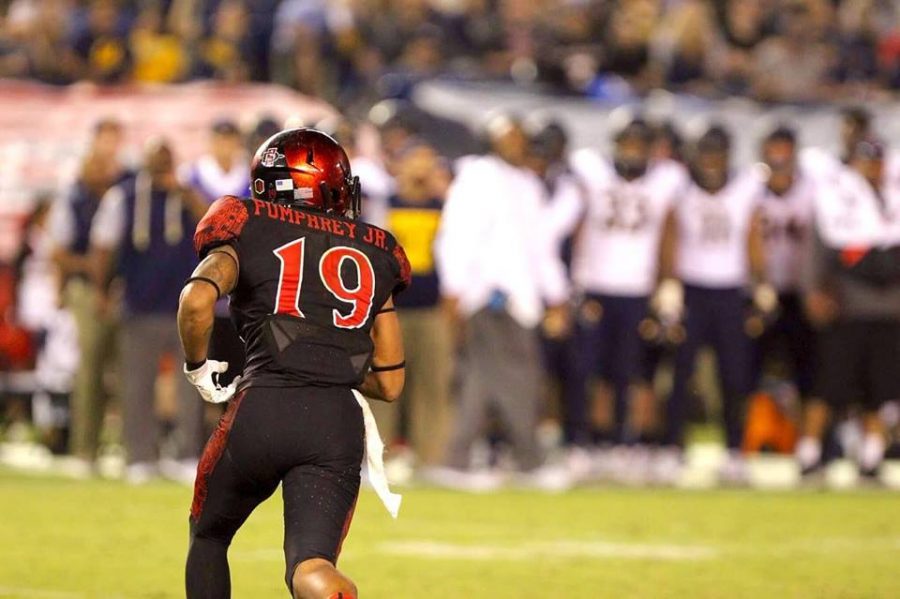 Senior running back Donnel Pumphrey during his record-breaking night against UCB.

On many instances in its 42-28 win over Northern Illinois University, San Diego State football did not look like the team that has dominated competition during the current 13-game winning streak.

The defense gave up big plays, the offense was at times stagnant and the team as a whole made mistakes throughout the contest.

But senior running back Donnel Pumphrey, as he has done time and again during his Aztec career, put the Aztecs – who are now 3-0 this year – on his back.

Pumphrey followed up his record-breaking performance against UC Berkeley with 220 yards and three touchdowns against NIU, including the first and last touchdowns scored in the contest.

The two games marks the first time in his illustrious career that Pumphrey has gained 200-or-more yards in consecutive weeks.

Pumphrey opened the game with a 46-yard touchdown run in the first quarter, forcing the Husky defense to overcompensate for the rushing threat for the rest of the game.

With NIU often putting eight or nine men in the box anticipating a Pumphrey run, redshirt sophomore quarterback Christian Chapman was connecting with receivers of all shapes and sizes on play action early in the contest.

In the first half, Chapman threw touchdowns on such plays, starting with a 27-yard strike to junior running back Rashaad Penny, putting the Aztecs up 14-0 and giving Penny four total touchdowns in 2016.

Penny has only two catches on the season, but both have gone for easy touchdowns.

On the next drive, off the heels of an interception by senior cornerback Damontae Kazee, Chapman completed a 7-yard touchdown to freshman tight end Kahale Warring on a fourth down, his first career catch.

The Carlsbad product put SDSU up 21-0 with a 33-yard touchdown pass to junior wide receiver Mikah Holder, who rebounded well from his tough game against the Golden Bears.

And even when the Aztecs did not score, senior punter Tanner Blain gave the Huskies terrible field position, pinning them within the 7-yard-line four times on the game.

But all SDSU did well in the first half – play-action passing, secondary play and special teams brilliance – seemed to vanish in the second half.

He connected with junior wideout Ezra Saffold on a 28-yard diving catch on the way to another Husky score.

Earlier in that drive, senior linebacker Randy Ricks committed a personal foul penalty that gave the Huskies a first down, just one of the many penalties by SDSU.

The Aztecs played undisciplined for the second game in a row, committing 11 penalties for 107 yards.

NIU would score on a 7-yard touchdown pass three plays after Ricks’ penalty, making the score 35-28 and putting SDSU in another contentious game.

While all other units were in disarray for much of the second half, however, Pumphrey continued his decimation of opposing defenses by responding to two Husky touchdowns with scores of his own.

The first was a 33-yard rush on the opening play of the fourth quarter and give SDSU 35-21 lead.

The second, which turned out to be his final touch of the game, was a 79-yard dash that put the Aztecs up 42-28 with 7:40 left in the game, and moved him to 29th on the all-time FBS rushing list.

The two touchdowns were his only two fourth-quarter touches, and gave Pumphrey 599 yards and seven touchdowns in 2016.

The defense followed Pumphrey’s lead and closed the door for the second straight week, intercepting a Graham pass just over a minute after the touchdown run.

While struggling for most of the second half, the defense showed up once again late in the game, forcing two turnovers on the final two possessions for NIU.