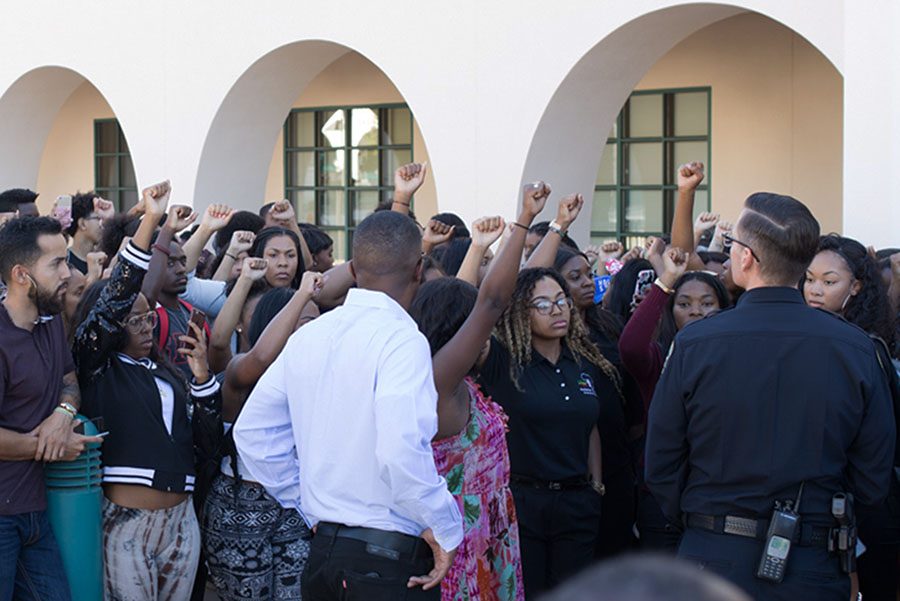 On Tuesday Sept. 13 the CIR posted that the police department’s Community Resource Officer, Cpl. Mark Peterson, would be having monthly office hours at the center.

“It’s quite obviously an attempt to surveil intimidate and control how students of color work and function in this space,” Facebook user Maureen Boyd commented.

After encountering backlash from the Facebook post, the center tried to defuse the situation by clarifying that police were invited into the space by the center.

Commenters demanded to know who invited campus police into the center. The page administrator responded by saying it did not matter.

Center for Intercultural Relations Director, Edwin Darrell said the office hours were designed to give students access to offices they may not feel comfortable going into or that simply do not have the appropriate resources to reach out to students.

On Thursday, Sept. 15, Joshua Mays, the interim chief of police, held an open forum at the center just hours before the arrest video was posted on Instagram.

At the open forum, Mays, who was not in a police uniform, expressed a desire for the police department to have a closer relationship with the community it serves.

He said he was aware of students’ concerns about police being present in the CIR, and tried to address some of these concerns by attending the forum unarmed and not in uniform.

However, many students were still not satisfied.

“Community policing means relationships and part of that relationship building is having discussions,” Mays said.“There are going to be uncomfortable conversations. That uncomfortableness is where the trust begins.”

Many students said while they felt Mays’ intentions were good, they were uncomfortable with the idea of a police officer in the center’s “safe space.”

“How are you training your officers to do the same and responding to a power dynamic that favors officers in every interaction?” a student asked during the forum. Mays said he agreed police officers need to be trained differently. He said that officers are trained to handle situations in one way and are trained on a threat level.

He said SDSUPD is trying to make changes, and brought in a researcher from UCI, L. Song Richardson, to educate officers about bias in policing.

“Biases are normal,” Mays said.“(Richardson) taught us how to unpack biases and how to deal with them by learning from human interactions.”

Social services senior Carlos Perez said that his biggest concern about police being at the center is that a lot of people who utilize the center have had violent encounters with police officers.

“I understand there are organizations and students who want to talk to police officers, but also understand that for safety concerns, there are other students that do not want to be talking to officers or be in a place where officers are present,” Perez said.

He said if the police department wants to have a dialogue with students, the Center for Intercultural Relations is not the place for it.

“I think they should be talking to A.S. directly, not here within the center,” Perez said. “Some do not feel comfortable or safe with an officer being here whether the officer is uniformed or not.”

The letter read, “As current students, on-campus workers, and lifetime alumni concerned about the integrity of the Center for Intercultural Relations, we find the decision to invite armed police officers into a historically safe space for underrepresented students deeply disturbing.”

“In terms of being on the suspect side, I was treated as less than human, I was silenced,” Ruiz said. “This is the opposite of how community policing is, and it is also contrary to the concept of wanting to get trust and respect.”

Regarding what Cpt. Mays’ statement, Ruiz agrees with the majority of what he said about creating a respecting, trusting kind of dynamic with the SDSU community.

“I question the tactics, and I question the methods,” she said. “I want to know more about how he is relating (his intentions) to officers and how officers are implementing these policies.”

Following both the backlash to officers’ presence in the CIR and the arrest video protests, Cpl. Peterson said on Friday, Sept. 16, that the police department is continuing to find ways to connect with the community.

Cpl. Peterson also said that based on the feedback, they are re-visiting holding office hours in the CIR and they will discuss this with the center.

On Thursday, Sept. 15, a non-SDSU student, Marquis Campbell, was arrested by SDSU police after he was reported for public intoxication.

His arrest was caught on video and posted to Instagram; the video led to dozens of students protesting police brutality in front of Manchester hall Thursday afternoon.

The Afrikan Student Union appeared outside of the courtroom during Campbell’s court hearing to support him and his family on Sept. 19.