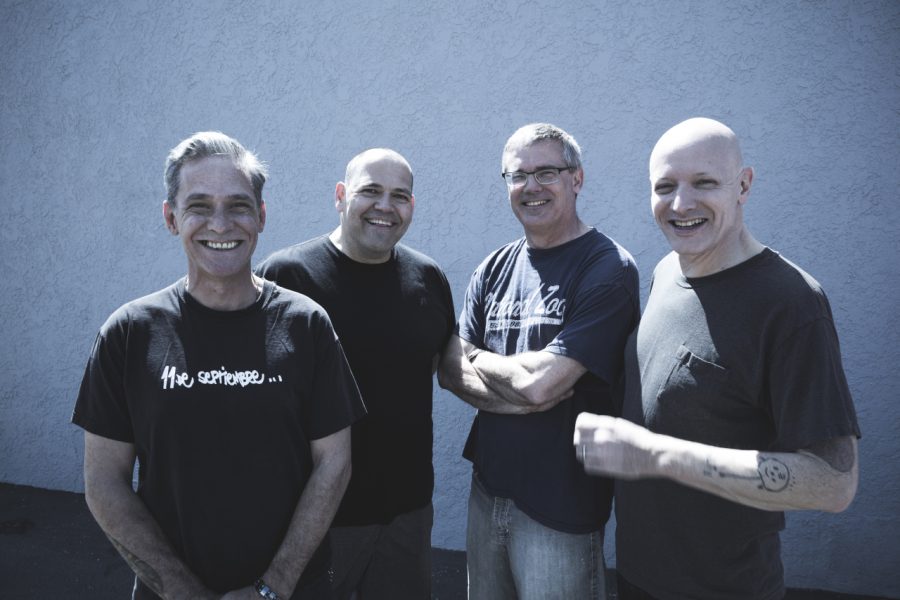 These aren’t the usual themes a band of 50-somethings would be singing about, but to punk legends, Descendents, it’s the lifeline to its die-hard fan base and youthful energy.

The band is set to perform Sept. 22 at Soma in San Diego, touring in support of its latest album, “Hypercaffium Spazzinate.”

Originally a project built for fun among friends, its members went on to become the pioneers of hardcore and pop punk.

The 1980s were a time when punk was violent, aggressive and mean, and Descendents were none of those things.

The band marked its territory with its signature dorky and relatable sound starting with lead singer, Milo Aukerman, the face of the band and a self-proclaimed nerd.

“Punk music was a complete game changer for me developing as a human,” Aukerman said. “It probably has a lot to do with the fact that I was a geeky nerd guy and punk speaks to that spastic element in all of this where you want to bounce off the walls and go apesh-t and punk made it okay to do that.”

This unusual element quickly became a large part of the band’s charm and continues to draw fans to this day.

Nearly four decades later, the band has released its sixth studio album after a 12-year hiatus from music. Aukerman described the band’s return as a reunion and a new beginning.

Since the formation of Descendents, its members knew of Aukerman’s aspirations to become a biologist and researcher.

This inspired its seminal release, “Milo Goes to College,” a farewell to the lead singer as he started school at UC San Diego.

Science often came before music which explains the sometimes large gaps between the band’s albums. However, this never meddled with its bond or sound.

What eventually brought the band together for good is drummer Bill Stevenson.

In 2009, he suffered a pulmonary embolism, undergoing surgery in order to remove a tumor from his brain.

This life-threatening experience reconnected the band members and motivated them to start writing songs in 2010 for their latest album.

“I kind of think this record is a culmination of that kind of rediscovery of the important things for us, you know what’s important in life and for me having a friend like that who was close to death and he’s my best friend and I mean I think a lot of the record speaks to that and there’s a few songs on there that are specifically about Bill’s recovery,” said Aukerman. “I think at the end of the record there’s a kind of like celebratory feel to it saying you know we made it we survived that period and we’re just extremely happy to continue on this path in the future.”

“Hypercaffium Spazzinate” is an homage to getting older but never changing.

Its melodic and fast tracks stay true to the band’s punk sound while the lyrics have a more mature voice, with songs like, “Comeback Kid” and “Beyond the Music” that come from a more reflective place.

However, like all its other albums, the band’s latest serves as a humorous commentary on the nature of life by speaking from personal experience in order to humanize both the musicians and the listener.

“I feel like their band is genuine. You listen to their albums and each CD is a relatable theme, Milo goes to college, I could really relate to that,” said Karen Huie, a child and family development senior.  “It’s cool cause they’re a punk band but they have all these songs like “I’m Not a Punk” where they’re okay with not being a part of that scene and doing their own thing. This has really influenced others, you listen to bands like Weezer and love them but you gotta acknowledge this aesthetic came from Milo first.”

While many artists attempt to reconnect with audiences by trying to seem younger, Descendents have forged this attachment through unapologetic honesty.

Descendents takes its fans along with its growing pains, no matter what age or circumstance. This band teaches audiences that some degree of maturity is inevitable, but there’s always room to laugh at one’s self and hate life too.