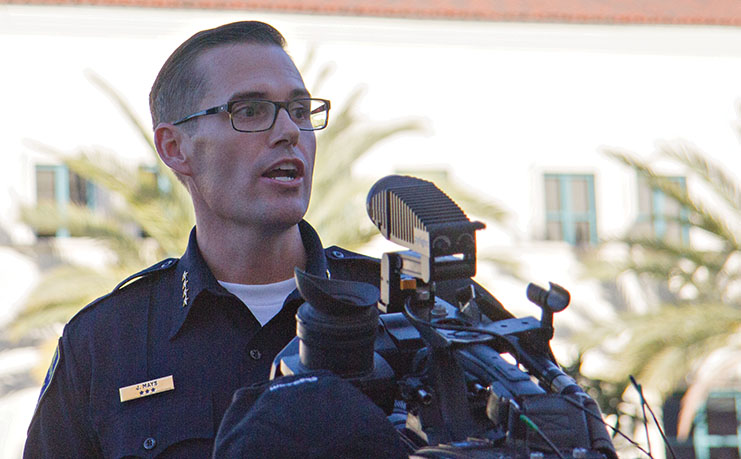 SDSUPD will begin to implement the program PERT when assisting civilians with metal health issues.

I rushed out of class to try to catch the last couple of minutes of the weekly Afrikan Student Union meeting last week when I received a text message from a friend.

“A black man was unjustly and violently arrested on campus today and we’re protesting in front of President Hirshman’s office,” it read. “Come join!”

My first thought was this had to be a joke. Incidents like this happen all over the country, but at my school? No way.

I bumped into a group of at least 75 people silently protesting with their fists up and their mouths closed. My first instinct was to join in.

But I realized I had no idea what had transpired. The best thing for me to do would be to follow them and get the full story.

We made our way to President Hirshman’s office. A line formed and members of the protest gathered into a straight line, in front of his office, waiting for him. I joined in on the line while I began researching the events on Twitter.

We were soon informed that the President had locked the doors — a red flag. A large group of students were expressing pain, fear and confusion and his first response was to lock them out.

After watching the video, a couple of things ran through my mind.

Police said force was necessary to subdue the suspect, who they believed was under the influence, trespassing and posing a threat to students on campus but they do not react with a similar level of force to all the belligerent drunk white frat boys that cause trouble on campus.

I also agreed the lack of compliance on the suspect’s part justified the use of force. From what was on video the suspect was acting erratically and it looked as though he was not willing to cooperate.

It was not what I would characterize as police brutality.

Although I understood the purpose of the protest, I stepped out of the line.

However, things could have been handled better. Rather than immediately protesting, we could have used that time to organize and wait for all the facts to come to light. I fully understand the impulse given the climate in this country surrounding black people and law enforcement.

My community knows the pain all too well.

I no longer give officers the benefit of the doubt. Abuses of power and mishandled situations are too frequent and too common.

But I get it. I understood and understand still. No one had anything to lose by participating in the protest. In fact, the black community was able to come together and be there to support one another.

I do not know the best way for police to handle non-compliant individuals. Sometimes force is required, but people of color are disproportionately on the receiving end of that force.

Communities of color do not always trust police. Nor do we always feel safe in their presence. It is important that we continue to keep a close eye on law enforcement and hold them accountable.

If the SDSU Police could take one lesson from Thursday’s protest, it is this:

We are watching you.