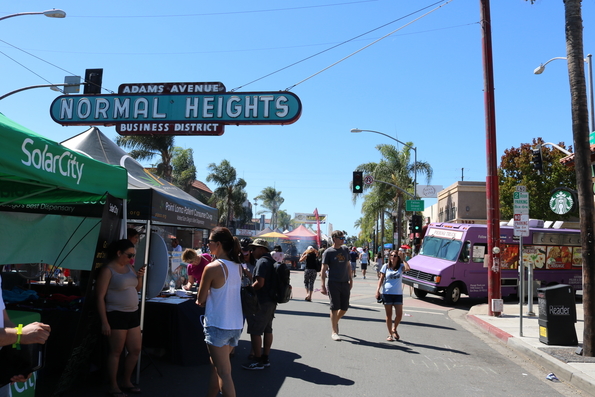 The sun was shining, the music was playing, the food stands were cooking and the vendors were selling. It seems the 35th annual Adams Avenue street fair had returned to San Diego.

This free two-day festival offered live music, carnival rides, festival foods and art. Located in the heart of Normal Heights, Adams Avenue was blocked off for the vibrant weekend.

The Adams Avenue Street Fair has featured local, national and international artists that often include Grammy award nominees and winners,

as well as Rock and Roll Hall of Fame inductees. Past performers have included No Doubt, Wanda Jackson, Mick Taylor and Floyd Dixon.

In addition to the local tunes, the Adams Avenue Street Fair provided craft beer tasting, as well as three beer gardens, for fest-goers over the age of 21. More than 15 breweries were in attendance during this year’s festival.

The sweet and savory smells from multiple food trucks and stands engulfed the street from every direction. Food ranging from fragrant kettle corn to Cambodian burgers was present. Even the popular San Diego State farmer’s market vendor Flavors of East Africa was in attendance.

Hundreds of vendors, including local businesses, campaigns and community organizations, lined the streets. More than 300 exhibitors sold unique products and services to those in attendance throughout the festival site.

One corner of the festival housed an assortment of friendly individuals dressed as clowns. Unity Lodge, located right on Adams Avenue, provided free child IDs at the festival. They provide this service every year at the street fair.

One of the many handcrafted jewelry booths included Taina Berardi’s Jewel of the Gypsy. Beradi is a local resident, and this was her first time being in the Adams Avenue festival.

“After I moved here, it was my goal was to be in the Adams Avenue Street Fair,” Berardi said. “It’s been really fun!”

Berardi received her undergraduate and graduate degrees at SDSU, and is hoping to expand her business.

Their most recent project involved helping a family whose house had burned down.

Unsurprisingly, the group did not have a problem selling out their booth.

The street performance group, We Are They, provided a lively show of dancing, drumming and other stunts. This group created a crowd of spectators eager to see what stunts the group had planned next.

The Adams Avenue Business Association, a non-profit organization whose mission is to promote and increase commercial activity, puts on the event every year.

The Adams Avenue Street Fair offers entertainment for people of all ages. With the diversity in music, art, food and vendors, it’s a shame the festival only comes around once a year.