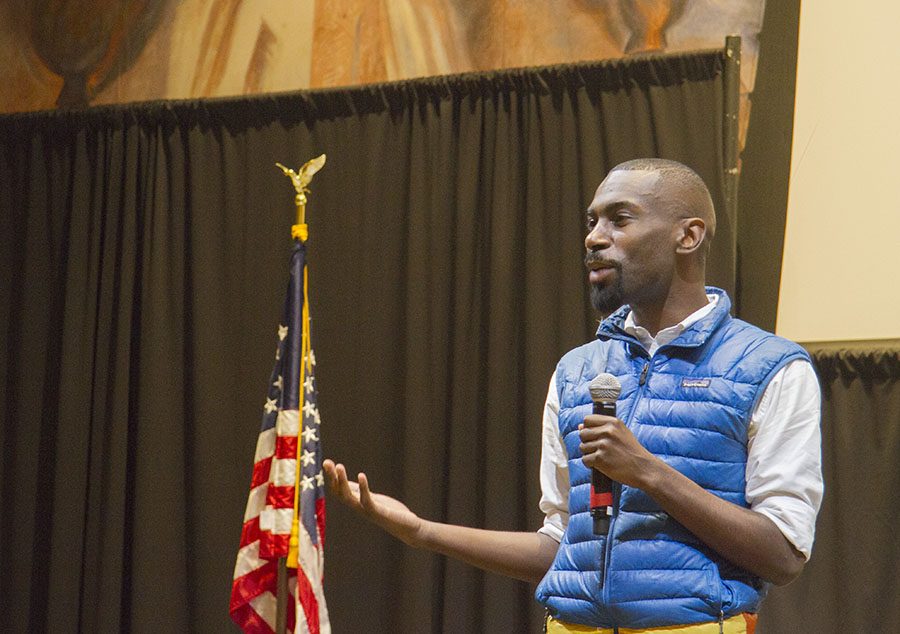 DeRay Mckesson, co-founder of Campaign Zero and activist of the Black Lives Matter movement, discussed issues surrounding communities such as police brutality, education systems and trauma at Politifest on Sept. 24.

The event was organized by Voice of San Diego and co-sponsored by the San Diego State School of Journalism and Media Studies. It attracted hundreds of students and community members to the Conrad Prebys Aztec Student Union.

Mckesson said he became involved in the Black Lives Matter movement in August when he drove nine hours to St. Louis to join protesters. He was tear-gassed the first night he joined others on the streets.

Since then, Mckesson has participated in several protests and even got arrested in Baton Rouge. where he spent 17 hours in a jail cell.

In spite of police brutality, he said he does not get discouraged because people continue to protest.

“What would discourage me is if people saw the trauma and did nothing,” Mckesson said. “People continue to find their voice and be organized.”

At the event, McKesson started off by focusing on the concept of trauma. He said whether trauma is the police, racism, or poverty, it takes people’s power away.

“Power is this idea of impact and agency,” Mckesson said. “In thinking about trauma myself, I thought about the moments I felt powerless. I got arrested and spent 17 hours in jail. I wasn’t in control of my body or space and trauma does that to people.”

He said that feeling is what racism feels like.

“Racism is this trauma that feels so present for people because it is so present,” Mckesson said.

Mckesson discussed white privilege and the different ways people can use that privilege to make a difference.

“What white people can do is use their privilege to disrupt its privilege itself,” he said. “They can talk about race in places and challenge systems in ways I can’t.”

Haley Welch, a member of the SDSU College Democrats and international business freshman, said as a white person she learned she needs to use her privilege to help people who weren’t given as much.

McKesson talked about protesting and organizing at its root and the next step in the Black Lives Matter movement.

“Protest is this idea of telling the truth in public,” Mckesson said. “We have forced these conversations in public about the trauma and about the solutions. That’s the power of what has happened.”

Mckesson then shifted to the 2016 Presidential race and how people believe it is about choosing a lesser of two evils.

“You should have concerns. But this is not about the lesser of two evils. There is one evil,” Mckesson said.

He was then asked about the fears police have when they’re on the job.

Toward the end of the discussion, Mckesson said he cannot think of an instance where it would be acceptable for a police officer to kill a person.

“When is it okay for someone to kill their child?” he asked. “That is the only way I can think about this. Somebody’s kid is being killed.”

Throughout the day, Politifest also offered various sessions revolving around measures and local elections that will be on the November ballot.

In a press conference before the event,  Mckesson was shown the recent video of SDSU campus police officers forcefully arresting 20-year-old Marquis Campbell, a non-SDSU student.

“It is a reminder of the immense power the police have and that they abuse regularly without accountability,” Mckesson said in response to the video. “It is a disappointment that those police officers are still employed by the university.”

He said the university should have said what happened was a problem.

“People shouldn’t have had to protest,” Mckesson said. “If the president (of SDSU) didn’t make a statement until there was a video, then that is a failure of leadership.”