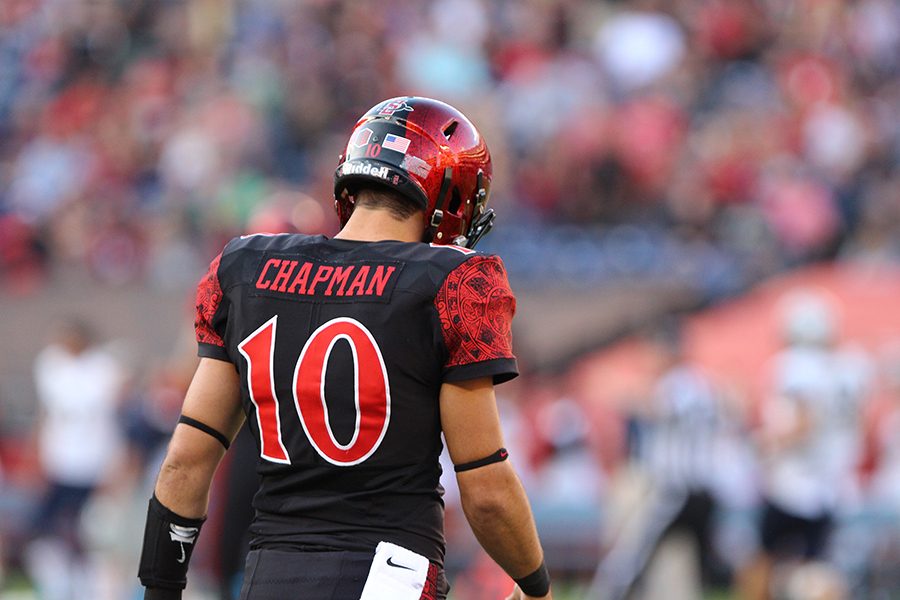 Redshirt sophomore quarterback Christian Chapman walks off the field after a failed play.

Senior running back Donnel Pumphrey sat on the sideline, tears in his eyes, watching as University of South Alabama freshman kicker Gavin Patterson put the final touches on the 42-24 win over San Diego State.
In that moment, Pumphrey, who has been the heart and soul of the No. 19 team in the nation, represented the entire SDSU football team, who has now suffered devastating losses to the Jaguars in two consecutive years.

The loss, which was the Aztecs’ first in 371 days, ended their 13-game winning streak, which was the second longest in the nation behind only the University of Alabama.

SDSU head coach Rocky Long summed up the loss after the game.

The team’s struggles, while wide-ranging, were highlighted by its inability to hold on to the ball, especially late in the game.

While turnovers are often the deciding factor in the game, in this instance the Aztecs were in more of a giving mood.

SDSU committed four turnovers, three of which came on consecutive drives in the final quarter.

Leading up to the game, Long warned about that very aspect of the game.

“We lose games when we lose the turnover battle,” Long said.

And, unlike the win over Northern Illinois University, there were no Pumphrey heroics to save them from a road upset.

Early on, it appeared that the bye week had done more bad than good for SDSU, as South Alabama went 90 yards for a touchdown on its first drive of the game.

The score put the Aztecs behind for the first time this year, an element of the game that Long said had an impact on their performance.

“I think you have to learn to come back,” Long said, “and we could have done it today if we didn’t make critical mistakes. It could have happened today.”

Two drives later, the Aztecs began the comeback with a 15-yard rushing touchdown from junior running back Rashaad Penny.

But that drive featured the lone touchdown, and first down, of the first quarter for SDSU, which saw the Aztecs outgained 180 to 55.

Thirty-seven of those 180 yards came on a touchdown pass from sophomore quarterback Cole Garvin to senior wide receiver Kevin Kutchera, a score that put the Jaguars up 14-6.

Garvin, who made his first career start in this game, picked apart a secondary that has been one of the calling cards for the Aztecs over their 13-game winning streak.

He threw touchdown passes, all of which went for 20-or-more yards.

After the toss to Kutchera, SDSU used one Pumphrey touchdown, one interception by junior cornerback Derek Babiash – the first of his career – and a field goal by junior kicker John Baron II to take a 16-14 lead into halftime.

But Garvin came out strong once again to begin the second half, finding senior tight end Gerald Everett for a 79-yard touchdown on the second play of the third quarter.

Redshirt sophomore quarterback Christian Chapman, who was 13-for-22 for 159 yards in the loss, responded with a 12-yard touchdown toss to redshirt freshman tight end Kahale Warring, who is becoming Chapman’s favorite red zone target. Warring has caught two passes this season and both have gone for scores.

That gave the Aztecs a 24-21 lead going into the fourth quarter, which would be the last lead they held.

And then, in a style that Aztec fans have not seen in 13 games, the Mountain West favorites fell apart.

On the first three possessions of the fourth quarter, SDSU turned the ball over on downs twice, and fumbled on a fourth down play.

The first miscue was a botched snap on an attempted punt, putting South Alabama at the Aztecs’ three yard line.

“I thought we handled it okay for a little while when you get rid of things like snapping it over the head and all that started happening,” Long said. “That’s when the score got out of hand.”

The final nail in the coffin came on the next drive, when senior safety Devon Earl returned a Chapman fumble for a touchdown, giving South Alabama a 42-24 lead and effectively crushing the hearts of the Aztecs.

SDSU will look to maintain its nine-game MW winning streak when it faces University of Nevada, Las Vegas next Saturday at Qualcomm Stadium.