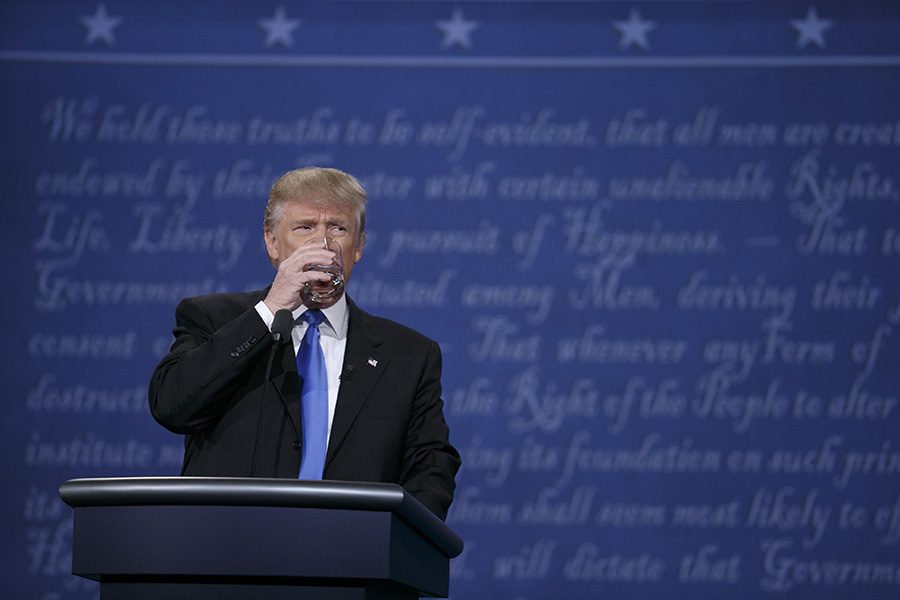 Ahead of election day on Tuesday, Nov. 8, the political positions of members of the San Diego State University College Republicans and College Democrats have a common theme – a distrust of presidential candidate Donald Trump.

For College Democrats, the only choice for president between Trump, former Secretary of State and a third party candidate is Hillary Clinton.

Junior history major Cole Parker, who supported Clinton during the primaries, said his biggest concern was Trump’s lack of experience.

He said the 2016 election was the first time he would be fearful of the competence of the Republican nominee.

“Donald Trump has no experience to speak of when it comes to being an effective executive leader,” Parker said.

Some students are also unenthusiastic about the prospect of a Clinton presidency.

“I feel like with Hillary, we’ll go forward, just not at the same rate as if we had Bernie,” said senior political science major Christopher Vallejo. “I mean, I’m voting for her, but it’s like an unenthusiastic vote.”

Despite the apathetic support of Clinton by some students, SDSU College Democrats President Divya Sriharan said she thought voting for a third party candidate would be counterproductive, calling it “Cutting off your nose to spite your face.”

“You’re basically trying to give a ‘screw you’ to Hillary, but in the end, we’re all going to be the ones that have to live with a Trump presidency,” Sriharan said.

Despite the distaste for Trump by some College Democrats, other College Republicans distrust Trump because they feel he has not been consistently conservative.

College Republicans Chairman Jordan Dennison said some of Trump’s actions, such as telling West Virginia voters not to turn out in the primary because he had the race locked down, illustrated a lack of understanding for down-ballot races.

He said Trump was not his first choice for the Republican nominee.

“I think he’s a decently corrupt individual,” Dennison said. “He was in every way not the most ideal candidate that we could have put out there originally.”

Shibuya said whoever wins the election the country will still lose

“I’m more interested in local candidates and local offices that will actually define our everyday lives,” Shibuya said. “I don’t believe that the focus should be put on Trump or Clinton.”

Clinton’s now-infamous remark in which she referred to half of Trump supporters as a “basket of deplorables” was seen as accurate by Parker.

Shibuya, on the other hand, didn’t see it as an issue.

“I wasn’t offended by it,” Shibuya said.

Clinton’s honesty was, however, an issue for the College Republicans.

Dennison said he wondered why Clinton did not reveal her pneumonia diagnosis before her pneumonia-related fainting incident at memorial for the 15th anniversary of 9/11.

Sriharan saw this as less of an issue for Clinton.

“If she said she had pneumonia, everyone would jump on it,” Sriharan said. “I don’t think that’s an issue, personally. I feel like a lot of people who are looking for reasons not to vote for her are going to find them, and if you’re just looking at the two candidates and which one had bigger issues with secrecy and doing shady things, I would definitely say it’s Trump.”

Regardless of their enthusiasm toward their respective candidates, both sides were surprised at the level of success Trump has had.

“It baffles me that he can be the nominee. I don’t understand how this happened,” Parker said. “I mean, if I sit there and dissect it, I can understand step-by-step how it happened, but if I go from Donald Trump on that escalator 15 months ago, to now, it blows my mind.”

Dennison said if you asked him in August if Trump would be the Republican nominee he would have said no way.

“If you would have asked me two weeks ago, I would have said no way, but on this day, I believe he has a chance,” Shibuya said.

The second presidential debate will be held on Sunday, Oct 9. at 6 p.m.