SDSU opens MW play with a dominating win over UNLV, 26-7 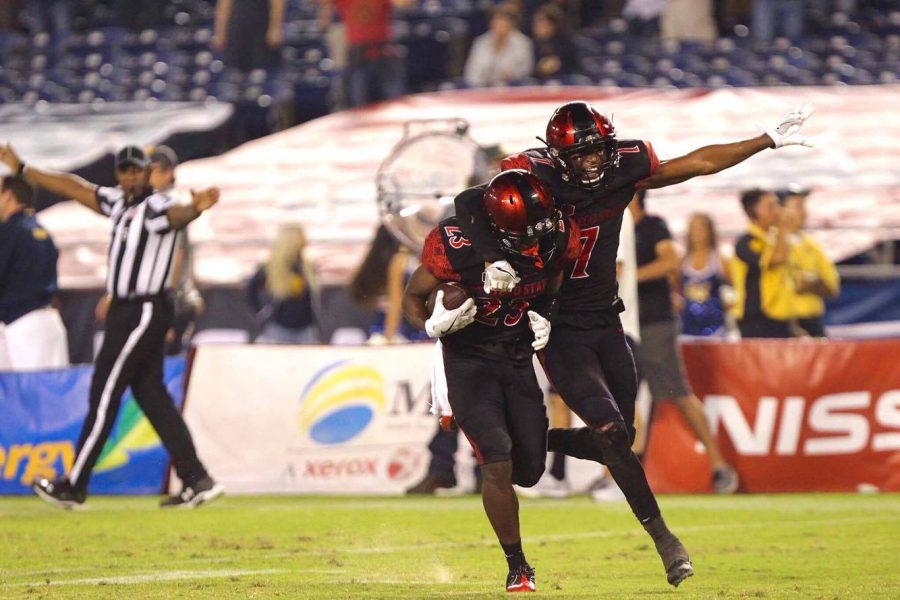 Damontae Kazee celebrates after the victory.

Fittingly it was the defense that led the way, holding the Rebels to 122 total yards and no offensive touchdowns in the lopsided win.

The win extends the Aztecs’ MW winning streak to 12 games, and gives them a 4-1 start to the season for the first time since 1996.

“I thought the team responded really well,” SDSU head coach Rocky Long said after the win. “They played hard, physical and aggressive, and we called plays as such. I thought we were the better team on the field tonight.”

The Aztecs opened the game using only four plays and 1:44 of the clock to score on their opening drive.

Redshirt sophomore quarterback Christian Chapman found junior running back Rashaad Penny on a play-action wheel route for a 41-yard touchdown, giving SDSU an early 7-0 lead. It was Penny’s third reception touchdown on the season and his sixth total score.

Chapman picked apart the Rebel defense on play-action to the tune of 215 yards and one touchdown, taking advantage of the Rebels loading the box.

“They had more guys at the line of scrimmage than any team we have played this year,” Long said. “It didn’t matter how many passes we threw, they never backed off.”

On the ensuing UNLV drive, junior cornerback Derek Babiash intercepted a pass for the second time in as many games, giving SDSU the ball at the UNLV 31-yard line. The Aztecs capitalized on the errant pass, as redshirt sophomore kicker John Baron II connected on a 48-yard field goal, a career-long, to give them a 10-0 lead early in the game.

“We always want to be dominant,” senior safety Malik Smith said of his defense. “We wanted to come out and shut them down this game, and I think the pick definitely set the tone for our defense, especially our defensive backs.”

But after the field goal, a string of badly timed penalties and failed third down attempts slowed the SDSU attack immensely.

After forcing the Rebels to punt on two straight drives, Chapman fumbled attempting to escape a sack, and UNLV’s senior defensive lineman Dominic Baldwin returned it 20 yards for the score.

That was the lone score of the game for UNLV and its longest play of the night.

The Aztecs out-gained the Rebels 257-52 in the first half and converted 12 first downs to the Rebels’ two, while holding redshirt freshman quarterback Dalton Sneed to 0-for-5 with one interception.

Sneed ended the game 2-for-12 for nine yards – the fourth-lowest total allowed in SDSU’s Division I history – and was harassed by the SDSU defense the entirety of the contest.

“There were four or five times that they had somebody wide open that there wasn’t anybody close to him, but the pressure forced him to scramble or throw the ball away,” Long said.

Despite the dominant performance, SDSU held a slim 13-7 lead at halftime, partly because of a failure to convert on third downs as SDSU was 2 of 8 on such plays.

With the second half came an SDSU ground onslaught against the UNLV defense.

In total, the Aztecs ran the ball 25 times for 138 yards in the second half, with 136 of those coming from Pumphrey and Penny.

Pumphrey found the endzone on a 9-yard rushing touchdown in the third quarter, the 54th rushing score of his career, and ninth of 2016.

Penny added a 4-yard rushing score of his own later in the third quarter, giving SDSU a 26-7 lead after a failed two-point conversion.

“You can see the defense start folding a little bit when you get those eight-yard, nine-yard gains and that’s when you finally come out the back and score,” he said.

The pernicious two-pronged attack of Pumphrey and Penny saw both backs reach the 100-yard plateau in the same game for the first time this season.

“They have two different styles, so you can never feel comfortable,” Long said. “The combination of the two of them makes it very difficult on the defense.

The dominant rushing attack helped the Aztecs win the time of possession battle as well, as they held the ball for 38:02 of the game.

The Aztecs will attempt to add to their 12-game MW winning streak when they take on Fresno State on the road next Saturday.