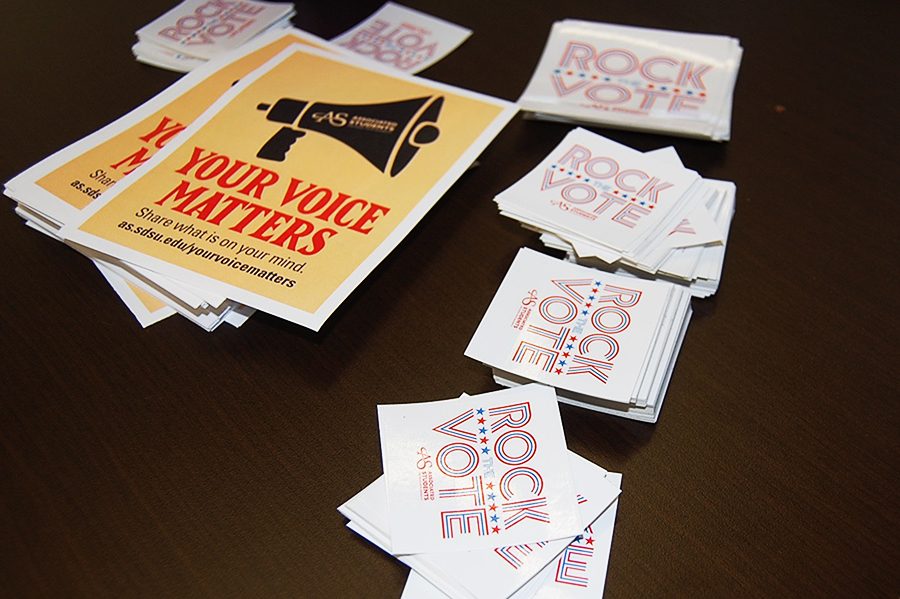 Since fewer than 20 percent of 18 to 24-year-olds voted in the 2012 election, San Diego State Associated Students and political groups on campus are rallying the campus community to participate in this year’s presidential and local elections.

Rock the Vote is a campaign hosted by A.S. with the goal to get more students to register to vote in this year’s election.

“It’s important to get your voice heard,” Carmel Alon, A.S. vice chair of external relations, said. “As young people, we feel we’re not as heard or as informed. We want to make sure students have the opportunity to voice their concerns on a local, state and federal level.”

The campaign started on Sept. 23 and goes through Nov. 8, Election Day.

A.S. hosted a debate between SDSU College Democrats and SDSU College Republicans on Oct. 13, which highlighted both parties’ opinions on issues surrounding the election.

Alon said debates like these allow students to hear both sides and opinions from other students.

“We’re the same age,” Alon said. “We’re going through similar struggles, so hearing why one party feels this way and the other the other way puts it into perspective.”

College Democrats President Divya Sriharan emphasized the importance of voting throughout the debate.

Although both parties disagreed on various issues throughout the debate, they agreed on the importance of voting and said they want to see the voter turnout among 18 to 24-year olds rise.

“It’s our future,” College Republicans member Vanessa McGoldvic said. “Yeah, we’re young, and some of these policies might not affect us as dramatically as they would if we were paying taxes, but we have to voice our opinions.”

President of Aztecs for Bernie Sanders, Sofia Hughes, along with other members, gathered over 250 people to join the club last year and made registering students to vote a priority.

This club held numerous registration sessions including a celebrity registration in May where several well-known figures helped the club register voters on campus.

Hughes said although Senator Sanders is not in the presidential race, she encourages Sanders supporters to align themselves with a candidate whose policies are most in line with his.

“It’s important people pick an ideology and stand up for it rather than picking a candidate and standing up for them,” Hughes said. “We weren’t standing so much behind Bernie as we were standing behind his policies and ideas for serious change.”

College Republicans President Jordan Dennison and Sriharan both said there are many propositions and candidates for Congress to vote for on the ballot.

Some of these propositions include changes in the public education system, changes in healthcare, repeal of the death penalty, background checks before purchasing ammunition and the legalization of recreational marijuana usage.

“It’s important to have your voice in there because in the end, if something goes your way or doesn’t, you shouldn’t be complaining if you’re not taking part in the process,” Dennison said.

The last day to register to vote is Oct. 24, and the presidential election is on Nov. 8.

Rock the Vote is holding a San Diego City Council Debate on Oct. 24 in the Union Theatre. There will be a poll site in Montezuma Hall from 7 a.m. to 9 p.m. on Nov. 8.