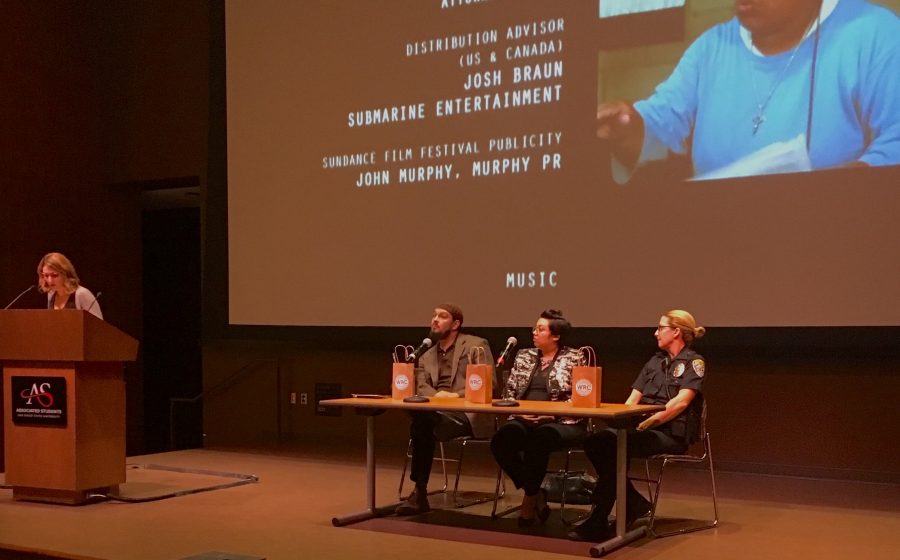 From 1977 to present, the number of incarcerated women has increased from 20,000 to more than 120,000. Eighty percent of these women are also victims of domestic violence, rape and other forms of abuse.

On Oct. 20, the Women’s Resource Center at San Diego State hosted a film screening and panel of “Crime After Crime” in the Conrad Presby’s Aztec Student Union Theater.

The 2011 documentary follows the struggle of Deborah Peagler, an incarcerated victim of domestic violence who was sentenced to 25 years to life in prison for her connection to the murder of her boyfriend, Oliver Wilson, in 1983.

In 2000, a California law passed that allowed incarcerated domestic violence survivors to reopen their cases and required courts to take in any new evidence of their abuse relating to their charges.

Two young lawyers, Nadia Costa and Joshua Safran, were convinced that Peagler had been wrongfully incarcerated. They took on her case pro-bono in 2005 to ensure her release, 22 years after her initial sentencing.

Although they did not know Peagler previously, Costa and Safran were also victims of abuse themselves and wanted her years of abuse to be acknowledged by the court.

Peagler met Wilson when she was 15 years old. They began dating when she was 16, but their relationship quickly took a downward spiral. Wilson began dealing drugs, forced Peagler into prostitution and brutally abused her in front of their own friends and family. Wilson threatened to kill Peagler and her two daughters if she tried to leave.

When Peagler discovered that Wilson was sexually abusing her 6-year-old daughter, she turned to two local gang members, begging them to force Wilson to leave her alone.

The eventual confrontation between Wilson and the two men escalated and Wilson was killed.

Peagler and the two men were arrested for Wilson’s murder. One of the men was a minor at the time and was offered a shorter sentence for testifying against Peagler and the other man involved.

After the birth of his youngest daughter, Oliver Wilson had purchased life insurance. The prosecutor claimed that Peagler had Wilson murdered in order to claim the insurance benefits. However, a majority of the money went towards his funeral costs.

Her case never went to trial. Instead, the prosecuting district attorney told Peagler that if she did not plead guilty to first-degree murder she would receive the death penalty. She pleaded guilty and received a minimum of 25 years in prison.

Under the new California law had passed, Costa and Safran submitted documents, including testimonies from Oliver Wilson’s own family, showing that Wilson had brutally abused Peagler for the duration of their relationship.

It was also uncovered that the District Attorney’s Office had known about the molestation of Peagler’s daughter by Wilson and had dismissed this piece of evidence for her prosecution.

The District Attorney’s Office returned a letter to her lawyers, declaring that with the newfound evidence taken into consideration, Peagler would have been given a charge of manslaughter instead of first-degree murder. In 1983, this would have meant that she would have been given a maximum charge of six years in prison, versus her sentence of 25 years to life. Before the release that was promised to her, they repealed their own statement.

Her lawyers finally filed a “compassionate release” after Peagler was diagnosed with stage four lung cancer. Her disease was most likely caused by her mechanical job in prison.

“The documentary was really good but also really sad because I really didn’t know that victims of domestic violence were treated that way, so it opened up my eyes to that because I had no idea that went on,” criminal justice senior Courtney Williams said. “I think the topics in the film like racism and sexism are things we definitely need to go over because it’s still obviously relevant in the criminal justice system.”

Alexandra Gonzales Buchanan was one of the panelists speaking after the film ended. Gonzales Buchanan is a staff attorney for the Center for Community Solutions, a county-wide organization that offers shelters, counseling, advocacy and outreach into the community for domestic violence cases. She runs a restraining order clinic for domestic violence victims seeking restraining orders against partners or family members.

Gonzales Buchanan believes that the film offers an accurate picture of the criminal justice system and how domestic violence cases, like Deborah Peagler’s, are unfortunately handled quite often.

In her experience, many cases end with abuser in the relationship and the criminal justice system turning against the victim. She attributes this to the gender power dynamic between men and women, where men are generally more comfortable using a system than women are, especially the women in abusive relationships that are told repeatedly that no one will believe them.

“I wouldn’t say any of it was surprising,” Gonzales Buchanan said. “I hate to say that, but I think that that kind of thing happens a lot to people that don’t have a lot of knowledge about the system, and even for folks that do, it’s still really scary and hard to know what the right decision is and what is a good decision versus bad and a good plea deal versus bad. It’s interesting to see the public perception changing about domestic violence. I think it’s important for people to see it actually happening so people know it’s not just something that happens in private or, like the film was saying, it’s not just something that happens to poor people in bad neighborhoods who grew up in bad environments. It’s something that happens to everybody.”