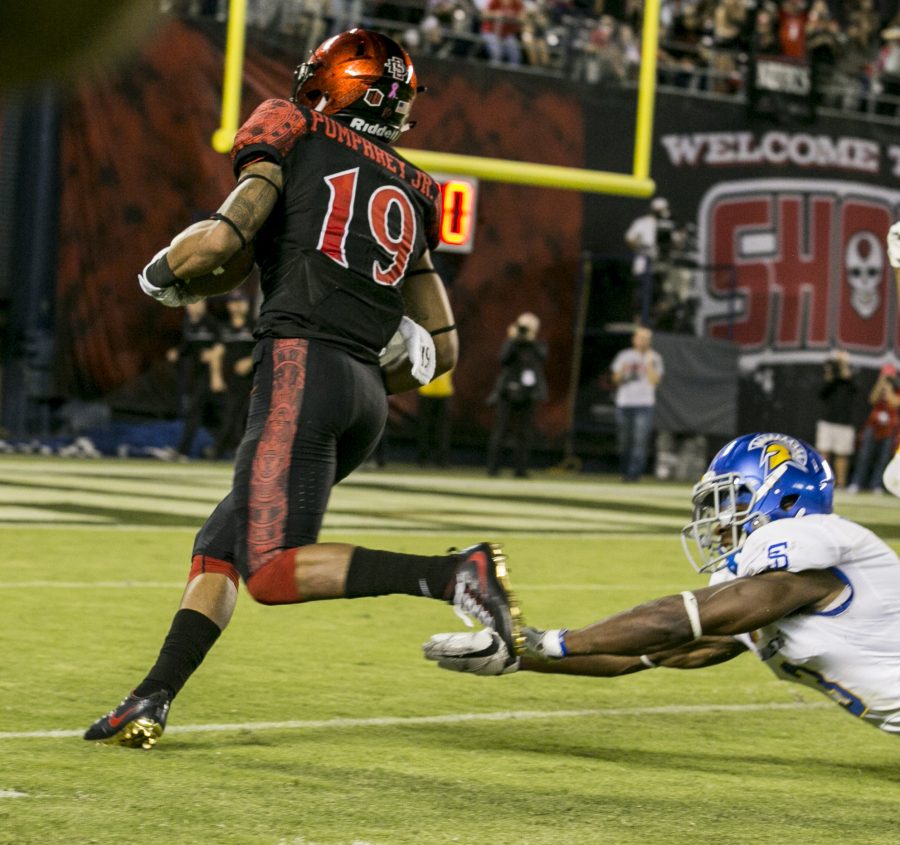 Senior running back Donnel Pumphrey (19) flies by a diving SJSU defender, on his way to a rushing touchdown.

Even the torrential downpour was unable to slow down the Aztecs, who have now outscored their four MW opponents 125-26.

Mother nature did have a hand in SDSU’s offense, however, as the wet conditions held the passing game to 14 yards on 10 passing attempts, both season lows.

Senior running back Donnel Pumphrey picked up the slack, notching the fourth 200-yard game of the season with 223 yards on 32 attempts.

He led the rushing attack that gained 400 yards, a season high, and that outgained the Aggies’ rushing offense by 329 yards, the largest margin in SDSU’s Division I history.

Those scores were the first two of his career, but he was not alone, as junior wide receiver Quest Truxton and senior safety Malik Smith also recorded the first touchdowns of their respective careers.

Another first was recorded early in this game – the first offensive touchdown allowed by the SDSU defense in conference play.

Junior quarterback Kent Myers gave the Aggies early 7-0 lead with a 10-yard touchdown scramble, closing out a 7-play, 70-yard drive that gave the Aztecs their first deficit in MW play since Oct. 31, 2015, almost exactly one year ago.

That lead would last only 57 seconds, as SDSU saw a 56-yard kickoff return by junior running back Rashaad Penny parlayed into a 39-yard touchdown rush from Washington.

That play marked his longest career rush, and first career touchdown, both coming on his first touch of the game.

That score began a run of 40 unanswered points from the Aztecs, who took a 10-7 lead on their next drive on a 21-yard field goal off the boot of junior kicker John Baron II.

The field goal was the first of four on the night for Baron, a new career high.

The next drive featured the longest completed pass of the game for the Aztecs, coming on Truxton’s diving 10-yard touchdown reception from redshirt sophomore quarterback Christian Chapman.

After three straight punts, Baron added a 41-yard field goal as time expired in the first half, giving SDSU a 20-7 lead at the half.

By halftime, Pumphrey had rushed for 151 yards, in the process becoming the fifth leading rusher in FBS history.

Utah State, by comparison, gained 84 total yards in the first half, 70 of which came on one drive.

Baron opened the scoring in the second half, punching through his fourth 40-yard kick of the season, a 43-yarder that gave the Aztecs a 23-7 lead.

SDSU would not score for the rest of the third quarter, but with the beginning of the final period came an explosion for the defending MW champions.

Baron would continue his perfect day, putting the Aztecs up 26-7 on his fourth field goal of the game, a 23-yarder.

After a 24-second Aggies drive that ended in a punt, one of seven on the night, Washington went 65 yards on two rushes, finding the end zone on a 1-yard score, his second of the game.

On the next play, Malik Smith intercepted a Myers pass, and strutted in for a 28-yard touchdown, putting SDSU up 40-7, and emphatically closing out the win.

Smith had the biggest defensive play on the night, but sophomore linebacker Ronley Lakalaka and senior linebacker Calvin, who recorded six and five tackles, respectively, were among several other Aztecs who made a difference in the game.