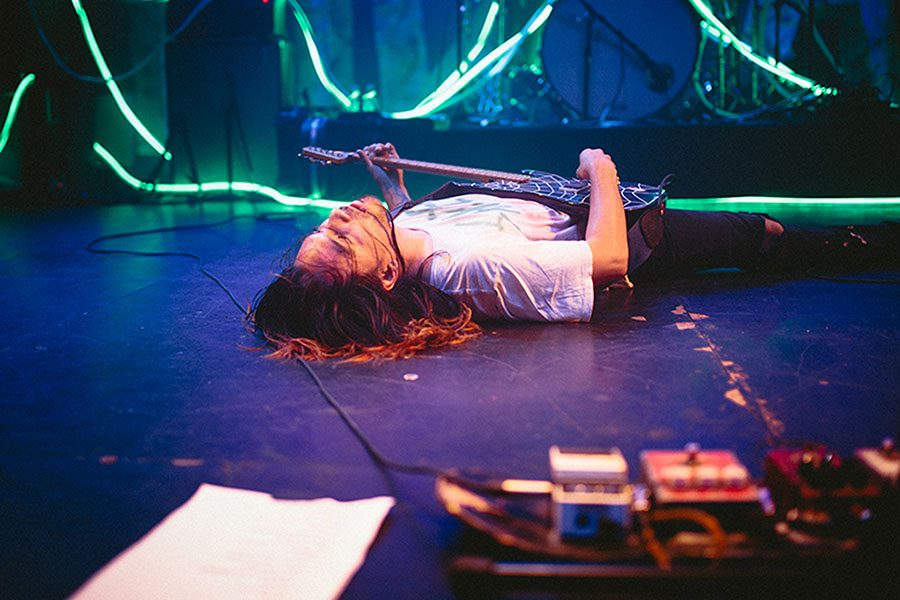 Punk rock fans and concert goers were brought to life Friday, Oct. 28 at The Observatory North Park, as SWMRS and FIDLAR electrified the stage during their tour debut.

The much anticipated show was maxed out in capacity and the line to enter the show reached around the block when the doors opened.

SWMRS released its first album, “Drive North” earlier this year, and debuted the record with high energy in San Diego.

Fans were roaring and mosh pits were forming before the band came on stage.

At 8 p.m., the Oakland based punk band came out and set the tone with “Palm Trees,” igniting the pit into a full on rage fest.

The energy was relentless and didn’t see signs of slowing down as Cole Becker, the lead singer, coerced angst and confidence into the audience with honest lyrics and impulsive energy.

The band showed its ability to diversify its style of play, when it slowed down the pace and brought out its alternative roots with “Miley.”

This gave the crowd a little breathing room from the continuous sweat-filled moshing. But the energy stayed the same as Cole ripped the chorus, delivering one of the most punk tributes to the American pop singer.

SWMRS followed the slow vibe with “Hannah,” and gave the crowd an honest tale with beautiful sound.

“Hannah is about a girl and came up with the song,” said Max Becker, after the show. “It was a collaborative effort.”

SWMRS’ performance continued to electrify the room and the level of energy was at an all time high in the midst of “Silver Bullet.”

The whole crowd sang along with Cole Becker, word by word, immersing themselves into the song and understanding the grittiness and emotion of the lyrics.

The band closed with “Drive North” and rallied San Diegans on its mutual hate for Los Angeles while jabbing at FIDLAR’s hometown. The energetic connection between the audience and the band set the atmosphere for FIDLAR.

FIDLAR’s entrance was nothing short of amazing, as the band came on stage to the national anthem playing.

The momentum from SWMRS took the crowd to a whole new level in the midst of FIDLAR’s presence and the whole floor turned into one giant and continuous mosh pit.

FIDLAR’s hit song, “40 oz on Repeat,” turned the crowd into a head banging rave, inducing euphoria and anger into the fans as they related to the state of mind that came with copious amounts of beer. Shortly after, FIDLAR followed with a fan favorite from its first album, “No Waves,” and the crowd continued to rage on with unrelenting energy.

The fans and the band were in sync that night, as lead singer Zac Carper told everybody to sit down at the beginning of “Cocaine.”

The built up anticipation was almost too much for the crowd and the whole venue roared in unison when everybody got up to the chorus.

The energy at The Observatory that night was almost enough to bring the whole venue crashing down. But FIDLAR had no intentions of slowing down as fans continued to rave on to grittiness and passion of “Bad Habits” and “Sober.”

Despite energy levels, the night came to an end as FIDLAR encored, “West Coast,” and left its fans on a high note. FIDLAR and SWMRS defined energy and brought their fans to an intense level.

They connected with them through honest songs and brought them to life with angst and unrelenting rage. In conjunction to the stellar performances, the two punk sensations sent a message to the crowd and ultimately conveyed their overall essence of their tour.

“I want to make sure that everyone feels comfortable in the show,” Cole Becker said after the show. “I want people to be aware of the privilege they have and make sure people without those privileges feel comfortable as well.”

SWMRS and FIDLAR share a collaborative vibe during the show, which they plan to continue.

“Basically this tour is a tour of a ton a friendship,” Max Becker said. “We’re super close with Fidlar and not many people know this but, this tour is actually called The Ohana Tour because Zac is Hawaiian and we just love to hangout and have a good time with them.”