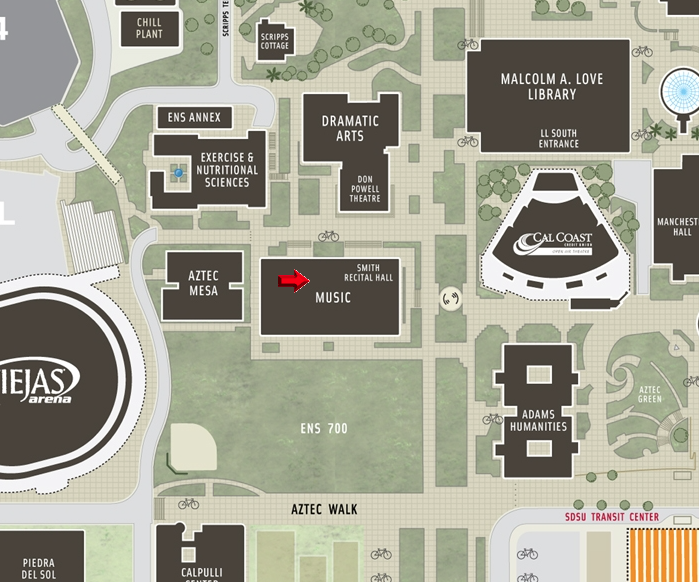 For music students, the opportunity to work with professional artists is one that does not come around too often.

The Campanile Music Festival at San Diego State is a week-long festival that gives music students exactly that.

The festival, which started last spring, culminated on Nov. 4 in the Smith Recital Hall, where faculty members and the visiting artists collaborated and performed music together at a formal concert.

From Nov. 1 to Nov. 4, the national and international guest artists worked directly with music students.

Students worked with the artists one-on-one and in informal group settings. They held workshops and Q&As in classrooms.

The faculty members and guest artists also held open rehearsals, so students were able to watch the process that goes into music collaboration on a professional level.

SDSU violin professor Pei-Chun Tsai, who holds a doctorate from the City University of New York, is the artistic director.

“It’s really for (students) to open their eyes and meet the artists that they sometimes get to see perform but never get to talk to or work with,” Tsai said. “You’re always learning. It opens up their minds and thoughts to know there’s so much more out there. It’s had a huge impact on the students in many ways from how to practice to what to do after you graduate, what your career will be like as a professional musician.”

Kim, who holds a doctorate from Juilliard, performed alongside Tsai at the final concert.

“The festival was incredibly fulfilling on many levels because it combined my two passions of my career which are teaching and performing,” Kim said. “I was really moved by how engaged (the students) were about learning things and the different approaches to study, to practice, to perform.”

Kim said it is always nice to have a fresh perspective, even though out-of-town musicians reinforce what has been taught previously by SDSU professors. so having other musicians come into town to reinforce

It took Tsai six months of preparation to make this program possible.  Last spring, she was awarded the Student Success Fee, a grant offered by the university that supports programs.

The grant is only offered in the spring, so this semester Tsai relied on private donations to make the program possible again. She said she hopes that she can continue to fund the program every semester.

Because the music department does not have a budget, normally visiting artists have to fund their own travel to SDSU and are offered a small amount of money to perform. Visiting artists also stay for only a short period of time.

“I’ve been at SDSU for five years, and every semester I wanted to bring people in to do master’s classes with the students,” Tsai said. “We don’t have a budget, so I’ll have an artist from Penn State who has to come and pay his own way and I’m only able to offer him a very small amount of money, then he’ll come and teach for an hour and leave and I feel like that’s not enough.”

Tsai said she wants to have more substantial interactions between out-of-town musicians and student musicians, that way students can get more out of each visit. Normally, similar music programs are held during summer, when artists and students spend two weeks practicing with and playing for each other.

Tsai said she found that many music students didn’t go to these types of festivals because they are expensive and difficult to get into. She wanted to bring this type of summer festival experience to music students on campus free of charge so they all would have the opportunity to participate and interact with national and international artists.

Tsai said she also wanted this program to be a tool for community service through youth and community outreach.

They spent the morning answering questions and performing for the young musicians. Because of this festival, the SDSU music department is able to put on high quality and high profile performances.

Tsai said it increases the profile of SDSU and puts the school on the radar of many different artists as well as future prospective students.

Last spring, the festival had performances from solely string instruments. This semester, piano was added to the festival, which was played by SDSU piano professor Toni James.

In the future, Tsai wants to incorporate woodwind instruments into the festival.

She said she hopes that as more instruments are included, more music students are able to participate and interact with the guest artists and get a fresh perspective into the world of a musical career.